The MX3 class is only in its second year – and due to the plague induced interruptions this is only the fifth event to be held for the category since inception. However, the depth of the fields, the quality of the racing and the talent on display is a testimony that it was the correct decision to reshape the development class into its current format.

The 13-18 year-old young-guns demonstrated incredible talent at Gum Valley, lapping only a few seconds slower than their more experienced peers in the other two classes. How they handled the daunting lay-out on the weekend was extremely impressive.

The class was over-subscribed once again, with 51 entries meaning 11 unfortunate souls had to miss out on the main game. As such the non-qualifiers had two consolation races of 12-minutes + one lap. 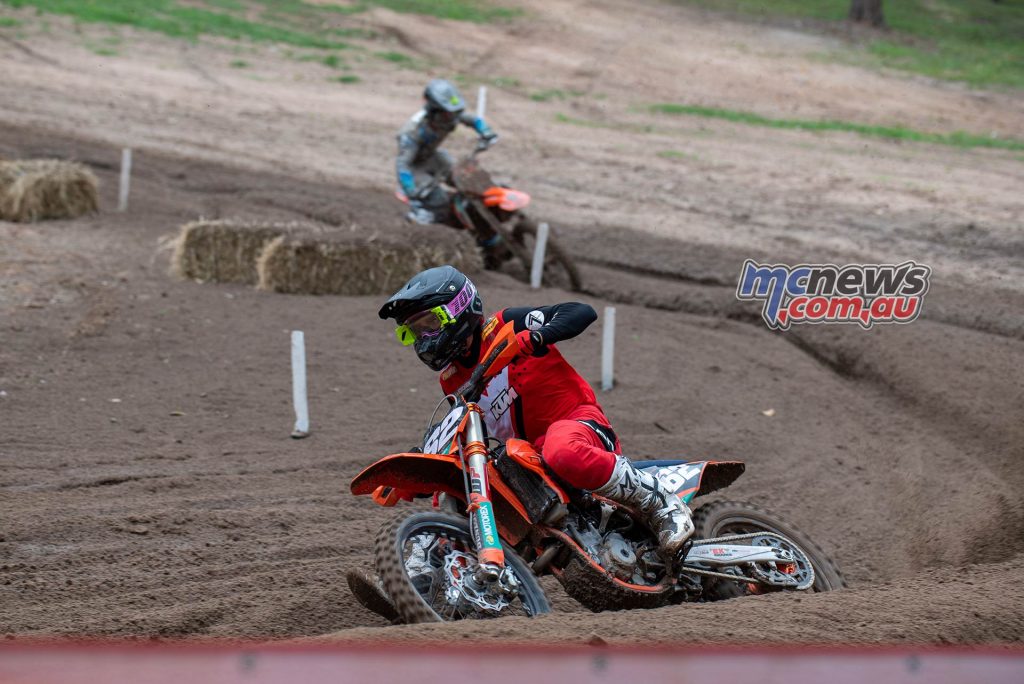 The opening Maxxis MX3 moto had drama before the race started.

On the warm-up/sighting lap, Sandgroper Brock Flynn (Husqvarna Racing) – who was second on the points table behind Honda rider Cambell Williams leading into this round – had a monumentally spectacular crash as he charged into the downhill turn two that was strewn with braking bumps.

The Husky’s rear wheel hit one of those bumps awkwardly which kicked the bike sideways, then another bump close by compressed the suspension, before it then unloaded and unceremoniously spat Flynn over the bars. The bike tumbled end over end with Flynn barrel rolling behind it about fifty meters down the hill before coming to a halt beyond the track limits.

Worryingly, he lay motionless in the foetal position for an extended time before he moved after being attended to by RaceSafe. Astoundingly, he managed to seemingly shake it all off and remount, and ride back to the start gate, no doubt his body still pumping with adrenalin.

The gates then dropped and 40 riders charged to the ultra-fast, right-hander that led onto the circuit proper. It was 14th fastest qualifier, Queenslander Ryan Alexanderson (Motorex KTM Factory Racing) that pocketed the $100 Matrix Stands Hole-shot award to lead the teenagers in their 20-minute + one lap heat.

Alexanderson, who was sixth overall after Wonthaggi, had Western Australian Kayden Minear (KTM Junior Factory Team) in close proximity with Conor Towil (KTM Newcastle) also getting a good start to leap up to second past Minear. However, Towil’s charge was short-lived as he then made a mistake that saw him drop way down the field to eventually finish 15th.

Alexanderson extended his lead over Minear to four-seconds by the fourth lap and looked set to check out, but 14-year-old Minear was like a terrier and wouldn’t give up, hanging onto his roosts and working away to slowly cut the lead down to just a second as the pair gapped the rest by over 20-seconds.

Queenslander Jack Mather (Husqvarna), who was second fastest in qualifying, had a moment on the opening lap to drop to seventh, before hauling up to fourth after five laps behind title leader, Williams.

Williams didn’t get the best of starts and dropped to fifth, before fighting back to third from Mather and looked set to close down the leaders, but a three mistake laps from home saw the pair swap places with Mather scoring that third place.

While there was plenty of position changes in the top ten, Minear ran out of laps to overhaul the leader, Alexanderson hitting the line a second in front of the Sandgroper with Mather a further 30-seconds away in third.

As for Flynn, he managed to complete six laps of the race before the took control and forced his retirement, he headed to the medical truck and took no further part in the action after being transported to hospital for a once over with suspected pain rib damage . Considering the nature of the accident, he was fortunate to get a relatively minor injuries.

Leg two of the Maxxis MX3 class was another stellar race where we will witness a battle between two West Australians far from home, that have grown up together competing on the brutal sand tracks of the west.

Minear grabbed the hole-shot from Myles Gilmore (Yamaha) and the pair set up yo-yoing with each other for the 12 lap duration moto. Gilmore would get oh so close, but Minear was not to be denied, hanging onto the lead to cross the finish line in front at every lap.

With a few laps to go the gap between the leading pair was just on a second and just when it looked like a grandstand finish was imminent, Gilmore dropped off the pace in the final laps with a couple of slides and a few moments leaving him to claim second, as Minear became the youngest winner of an MX3 race at the ripe old age of 14.

The respect between the pair was on display after the chequered flag as they fist-bumped each other and gushed about their duel.

Williams was third for the entire race, but at no point threatened the leaders as the gap increased from 3.6 seconds at the end of the opening lap, to nearly half-a-minute by race’s end.