Less than 48 hours before the start of practice for the Isle of Man TT, Dunlop have sensationally withdrawn their KR 108 range of slick tires from competition at the event, citing safety concerns as the reason.

A Dunlop statement: “We are racers at heart and safety is very much our first consideration.
“With our long history of success at the Isle of Man TT, we know what it takes to win and set lap records at one of the most challenging races in the world. Following tire conditions experienced by three Superbike riders on Dunlop KR108 slick rear race tires at the North West 200, and understanding the importance of giving riders the confidence they need to perform on such a demanding high-speed road circuit, we have taken the decision to withdraw the KR108 slick rear tire range from the 2022 Isle of Man TT Races and offer the D213 GP PRO treaded rear tire range as an alternative option.”

Only a week ago Dunlop declared that they had the ‘complete trust’ of their riders going into the TT after an investigation found that it was simply a ‘bad batch’ of tires thar had caused the issues at the North West 200. Apparently everything was good to go for the island.

Few people would argue that Peter Hickman, Dean Harrison and Michael Dunlop will be the most fancied runners lining up on the Glencrutchery Road on the 4th June for the SBK TT. But will that still be the case if they are on treaded tires? Padgett’s Honda men Conor Cummins and Davey Todd will also be effected.

The likes of Ian Hutchinson, James Hiller and 50-year-old John McGuinness must have been rubbing their hands when the Dunlop announcement broke on Friday. The Metzeler wearing trio will sense an opportunity, that’s for sure, but it remains to be seen what Hickman et al’s next move will be.

Will Dunlop allow the likes of Hickman and others to jump ship? Will those riders want to? Hickman has been vocal in his support of the London based company since the North West. He said this just a few days ago: “I for one am glad to be racing with Dunlops, yes there was an issue no doubt, but did you know that even with the problems that all the tires stayed on the rims and that is down to how Dunlop have developed the carcass/tyre. This is ultimately what saved us riders and had it happened on other brands (it’s happened to all brands over the years) the outcome would have been different. 100 per cent trust from me.”

Will Hickman run on the treaded Dunlops or jump ship to a different brand?

Michael Dunlop has been tight-lipped since the footage emerged of his rear tire blowing into the seat of his Hawk Suzuki at the North West as he negotiated the fast coast road section of the course. Dunlop has a history of jumping ship when things aren’t right. He famously ditched Milwaukee Yamaha during practice week in 2015, deciding that his old Hawk BMW team would be better suited to the job. And of course, just a few weeks ago Dunlop had a deal with PBM Ducati fall through in the lead up to this year’s North West and again it was the Hawk team who came to his rescue, this time with Suzukis.

Dunlop’s team-mate Richard Cooper was a Metzeler man at the North West and came away with a 2nd place from a controversial 2nd Superbike race that went ahead without Dunlop riders involved. You would have to assume that Michael Dunlop will have no qualms about ditting his namesake rubber supplier if he feels things are not right. However, last minute chopping and changing is not ideal preparation for the TT.

Dean Harrison must be kicking himself. He became the first non-Dunlop rider to take victory in the Senior TT since 2005, when he won the 2019 edition of the prestigious race. In the aftermath, Metzeler held him aloft as their golden boy. However, in 2021 Harrison defected from Metzeler to Dunlop…

Like Michael Dunlop, there has been little word from the Harrison camp on the current controversy, but you would have to assume that of the three hot favorites, Deano should be able to make the smoothest transmission to Metzelers if that is the course of action he should wish to take. 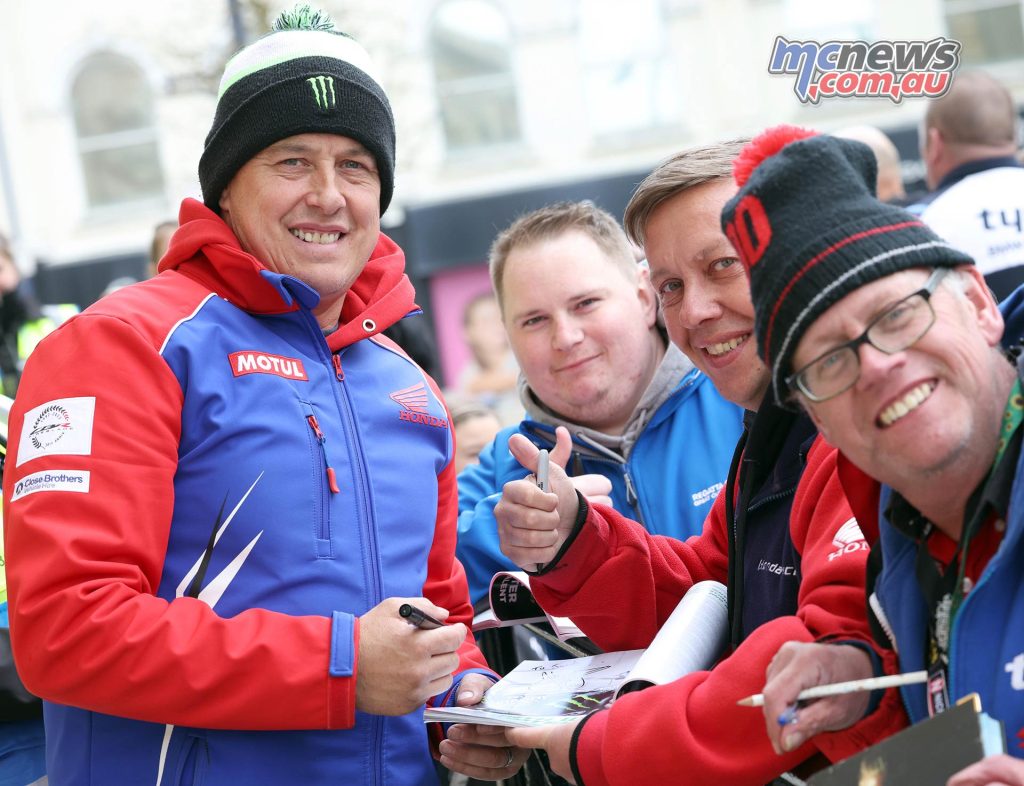 Honda racing will be watching closely and the situation could play right into their hands. McGuinness arrives at the TT coming off the back of a strong performance at the North West where he recorded a pair of 5th placed finishes. A solid showing from McPint at a race where he hasn’t been known for sticking his neck out at in the lead up the TT. Perhaps the stars are aligning for a fairy tale return for the Morecambe missile. He is back with Honda after a few years trying other things (relations turned frosty with Honda as McGuinness felt he was unfairly treated when faulty electronics caused a serious crash at the North West in 2017 – one that almost finished his career). Prior to the 2017 NW200, he had been with Honda every year at the TT since 2006.

However, that is all forgotten now and McGuinness is back where he belongs, he said: “It’s like stepping back into an old pair of slippers. The stars have aligned for me to be back on a Honda for my 100th TT start.”

If John McGuinness MBE were to hold the silver lady aloft one more time at this year’s event there would be few who would begrudge him the glory.

Hutchinson and Hillier, the other double-H won’t be making it easy for him or the others. Hutchinson hasn’t had an easy time since he crashed heavily on the mountain during the 2017 Senior TT. However, like McGuinness, he returns to familiar surroundings with the TAS BMW team, this year sponsored by Milwaukee. The Bingley bullet initially signed to race for TAS for 2020 but the deal has been on hold for obvious reasons.

“It’s been a crazy five years for me since I last rode for the TAS Racing Team,” said Hutchinson. “Coming back from injuries in 2018, then re-signing for TAS in 2020 but never getting to ride the bikes because of the Pandemic. Fingers crossed everything comes together for us this time, and also for the TT. Coming back to the team, where I’ve enjoyed my most recent success at the TT, was something I hoped would be possible throughout this winter and to hear the title sponsor is to be Milwaukee, really was the icing on the cake. Both TAS and Milwaukee have given me great success in the past, so I look forward to us all working together again in 2022.”

Conor Cummins has been a constant on the big bike podiums at the TT up until 2019, and must surely have thought he was coming into the event better prepared than ever before. The Dunlop slick issue will come as a real kick in the teeth for the Manx hero. Like-wise for Davey Todd who came of age at the North West, contesting towards the front in almost every race he started despite not actually winning one.

Perhaps James Hillier will be the dark horse who rides in to take the spoils from all of the above. After a career spent riding Kawasakis he has jumped ship to the OMG Yamaha team. Davo Johnson had been due to be his team-mate however, injuries sustained at Brands Hatch in a nasty crash meant that the Ozzie has to unfortunately sit the TT out.

Hiller has always been a podium man but has never looked like winning a superbike TT despite his success in the Twins category. Arriving on the island armed with machinery supplied by the team leading the BSB championship, that could be just the change he needs to finally cement his place as a true contender.

“I can’t wait to get back to doing what I enjoy so much, it’s been a long time away for everyone involved and it’s going to be something special for myself and RICH Energy OMG Racing Yamaha to finally begin our road racing journey. Practice week at the TT will be a challenge to re-learn the circuit and develop a new bike but with a strong team around me I’m excited to be riding Yamaha machinery this year. The Yamaha R1 and R6 are proven race-winning motorcycles, and our sole goal is to continue that winning success by returning the Yamaha R1 to the top step of a road racing podium.”

Despite OMG being new to the TT and Hillier being new to the R1, he might just be the best prepared man of them all. Considering Hutchy’s injury history and taking into account McGuinness’s age, and the lack of slick tires for the rest, maybe Hillier is the man who has all the is dotted and the Ts crossed. Thankfully we won’t have to wait long to find out, as qualifying week gets underway on Sunday…