Norton has just acquired a jaw-dropping collection of 55 rare classics from a single source. We also profile a custom Ducati Scrambler 1100, a classy BMW R80 café racer, a Royal Enfield Himalayan, and a Honda CB50 that was built in a spare bedroom. 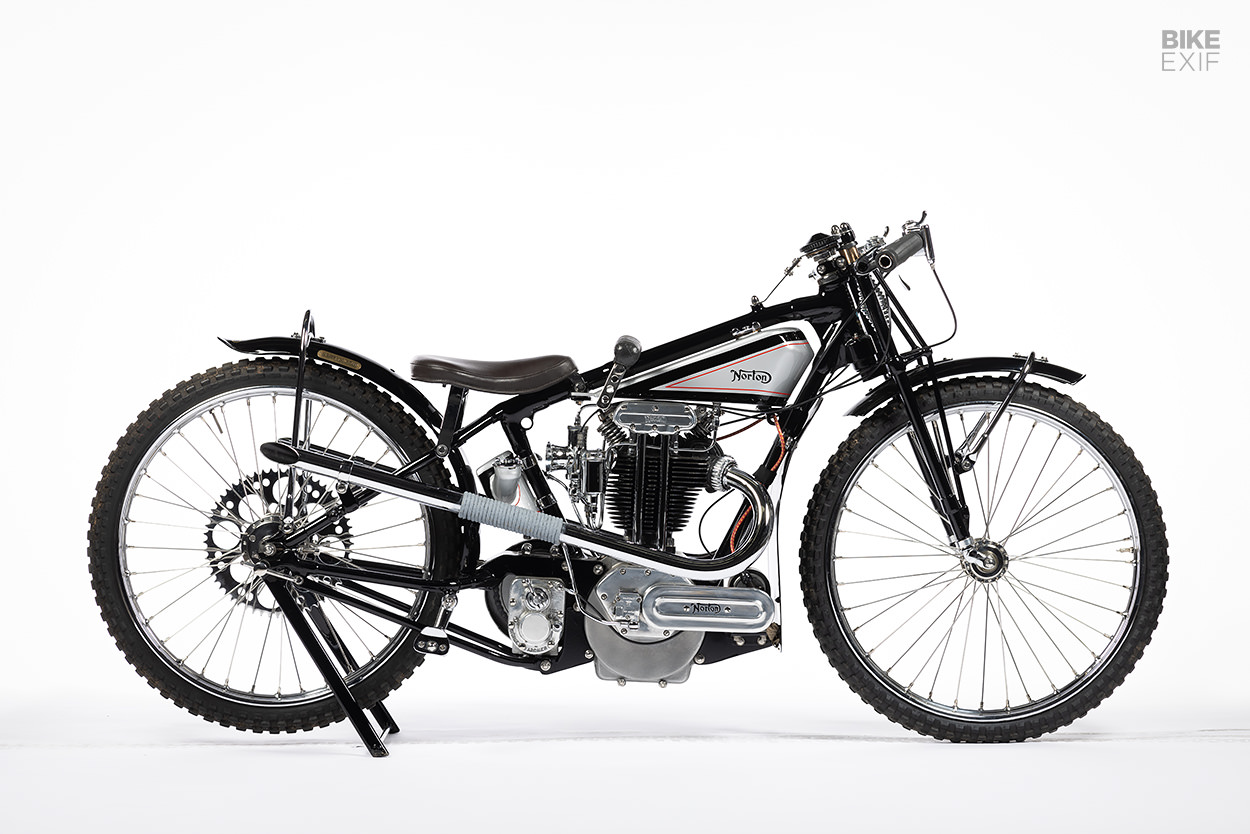 Norton’s heritage collection It’s only been two years since India’s third-largest motorcycle manufacturer, TVS Motor Company, purchased the storied British marque, Norton Motorcycles. But while the future of the brand slowly unfolds, one thing is abundantly clear: its new owners are big on its heritage. They still build Nortons in the UK, and, as if to drive the point home, they’ve just acquired a collection of 55 classic Norton motorcycles. 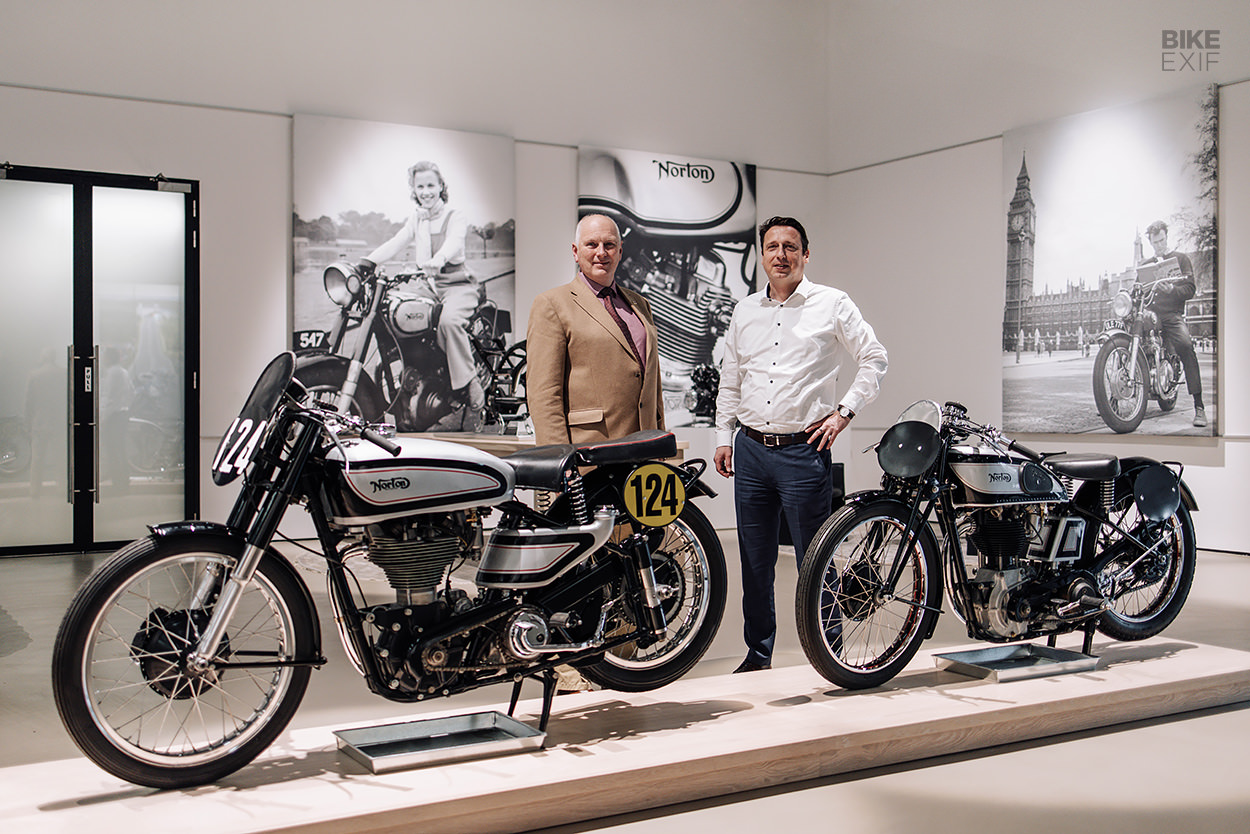 Spanning from 1916 to 1992, these bikes are the opening salvo in Norton’s heritage collection. Remarkably, they were all purchased from a single collector—his name is Ian Loram, and he’s been buying up classic Nortons since the 90s. A true enthusiast, he admits that he would never pass up on the opportunity to buy a rare Norton that’s gone on sale.

The collection is not only impressive in size, but it boasts some pretty special bikes too. There’s a 1921 Model 1 ‘Big Four’ in the set [below], which was said to be founder James Norton’s favorite bike. (He actually rode a sidecar-equipped Big Four 3,000 miles across Africa to visit his brother in South Africa in 1921.) 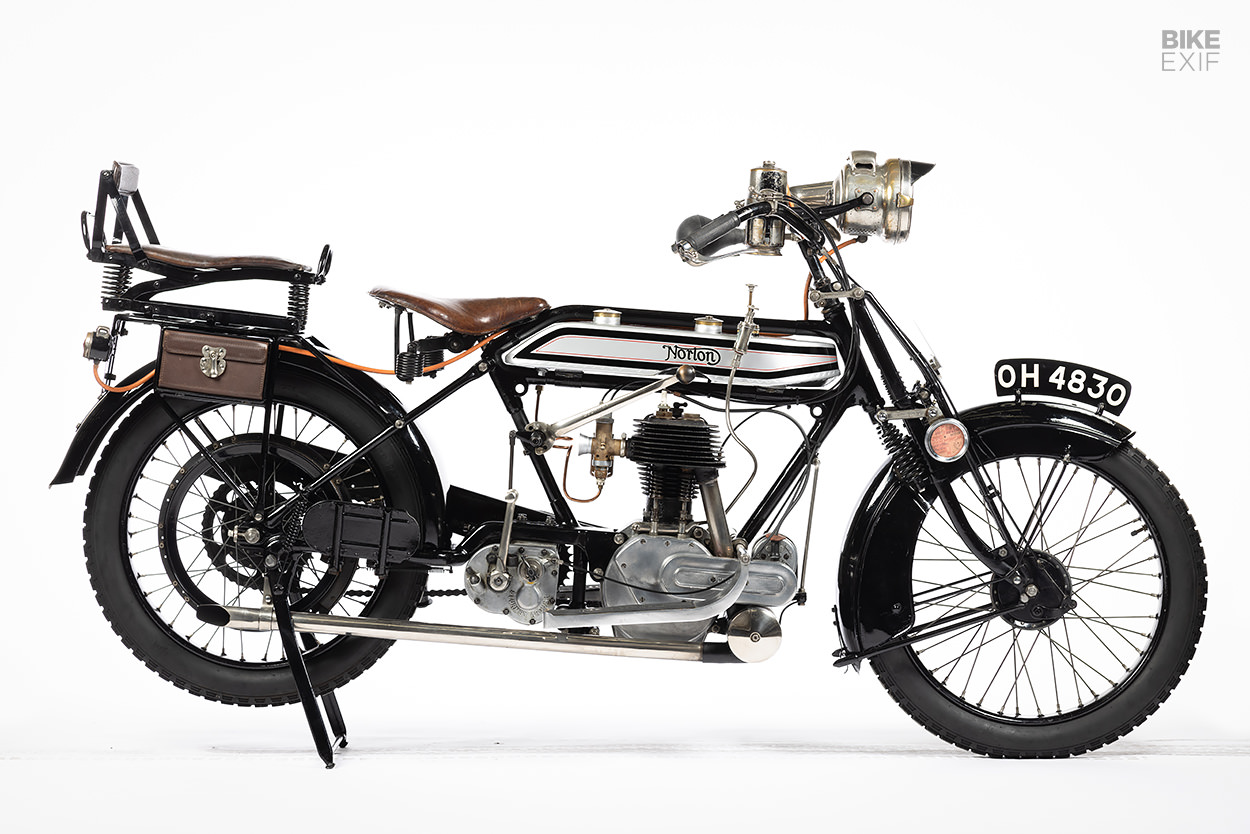 Then there’s the extremely rare 1930 DT speedway bike, equipped with a 500 cc twin port engine and a three quarter gallon fuel tank. Norton only ever built 53 of these, and loaned this particular one to Oliver Langton to race.

Other notable inclusions include a 1990 Norton F1 Rotary [below]which was the road-going version of the RCW588 race bike, and the 1929 CJ350, which was designed by Walter Moore. 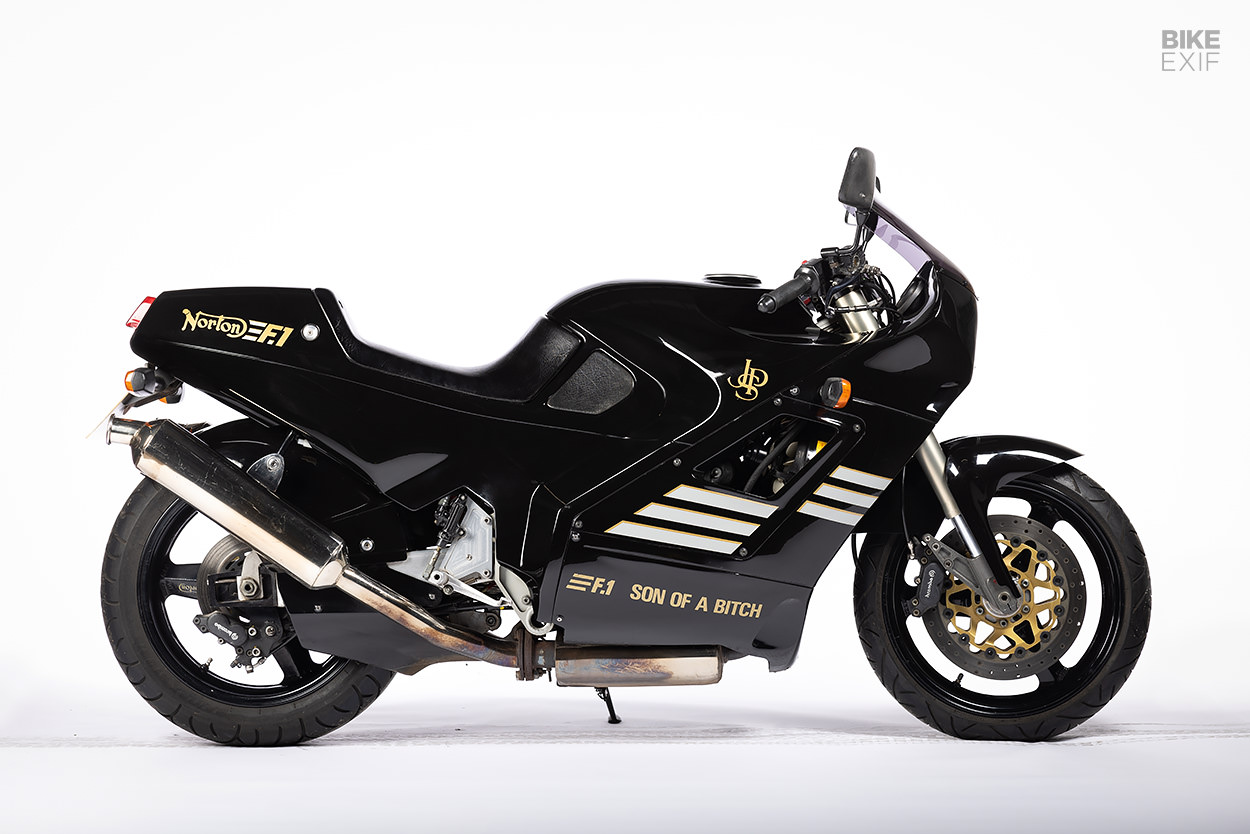 Plus there’s a fully restored 1938 Clubman International, a 1929 JE350 that’s one of only six remaining examples, and a race-specced 1950 Norton Manx.

Perhaps the most British of the lot is the 1968 Norton Atlas Police bike. Used for Royal Family escorts, it has ridden alongside the Queen, the Queen Mother and Prince Charles. Some of the bikes will be on show at Norton’s new HQ in Solihull, which will be open to the public in the future. 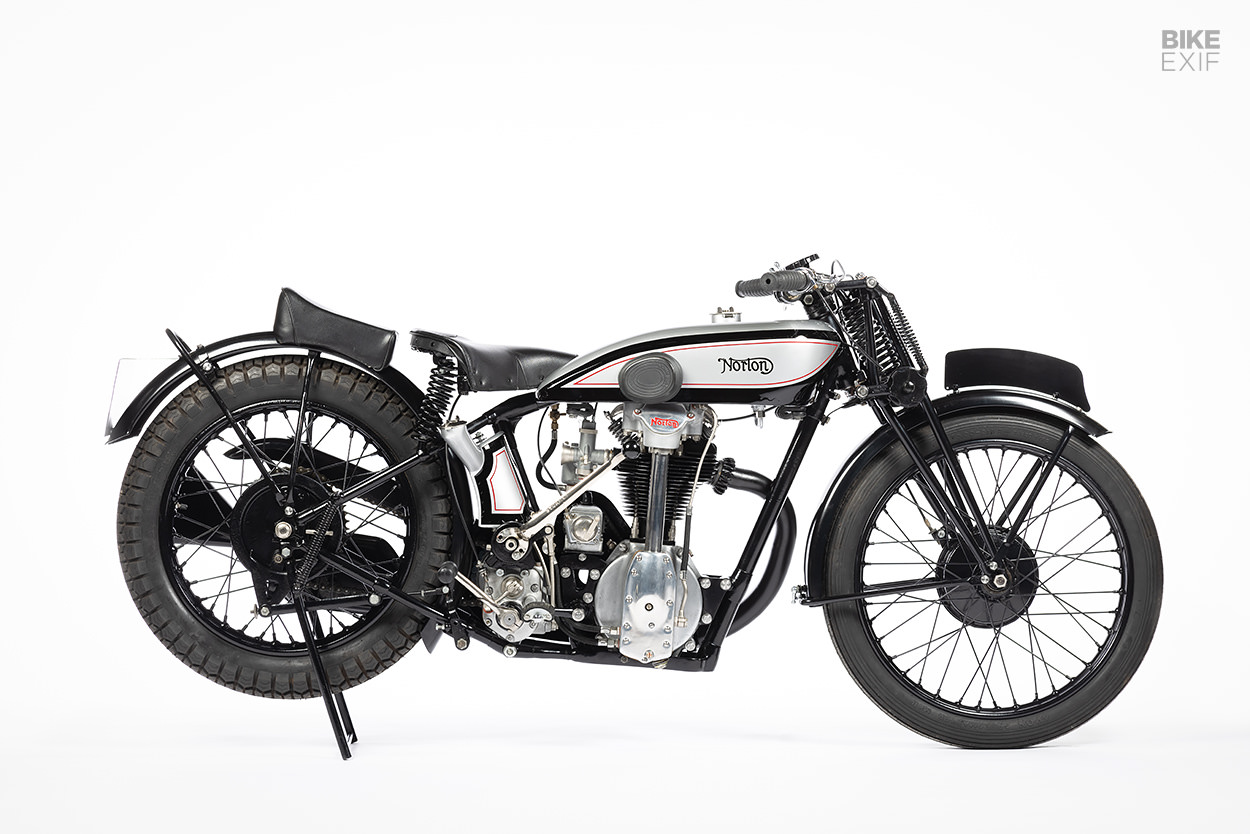 It’s a stunning collection that begs for its own museum, but it’s also an encouraging sign of where the brand’s headed. As their press release puts it: “it’s vital that we continue to celebrate the great products of our past, because they will impact and steer our future.” [Norton Motorcycles] 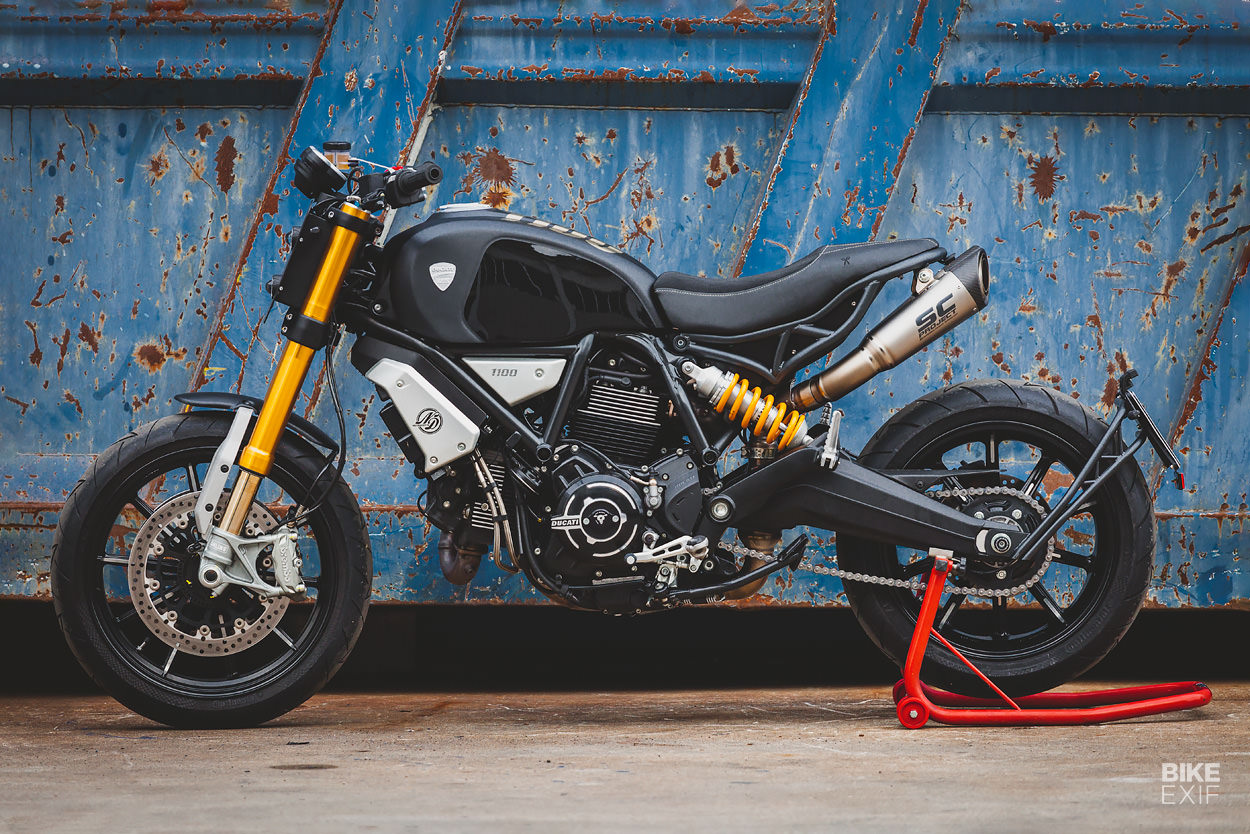 Ducati Scrambler 1100 by Nico Dragoni Motociclette I’m going to out on a limb here: the Ducati Scrambler 1100 is massively underrated. Ducati’s confusing nomenclature belies what it truly is—a chunky roadster that, while not as fast as some of its stablemates, is arguably more stylish. And it responds well to light fettling.

This one belongs to a gentleman named Paolo Ferri, who had a desire to make the bike just a bit more compact, and better suited to his riding style. So he roped him the Italian shop Nico Dragoni Motociclette to help him bring his vision to life. 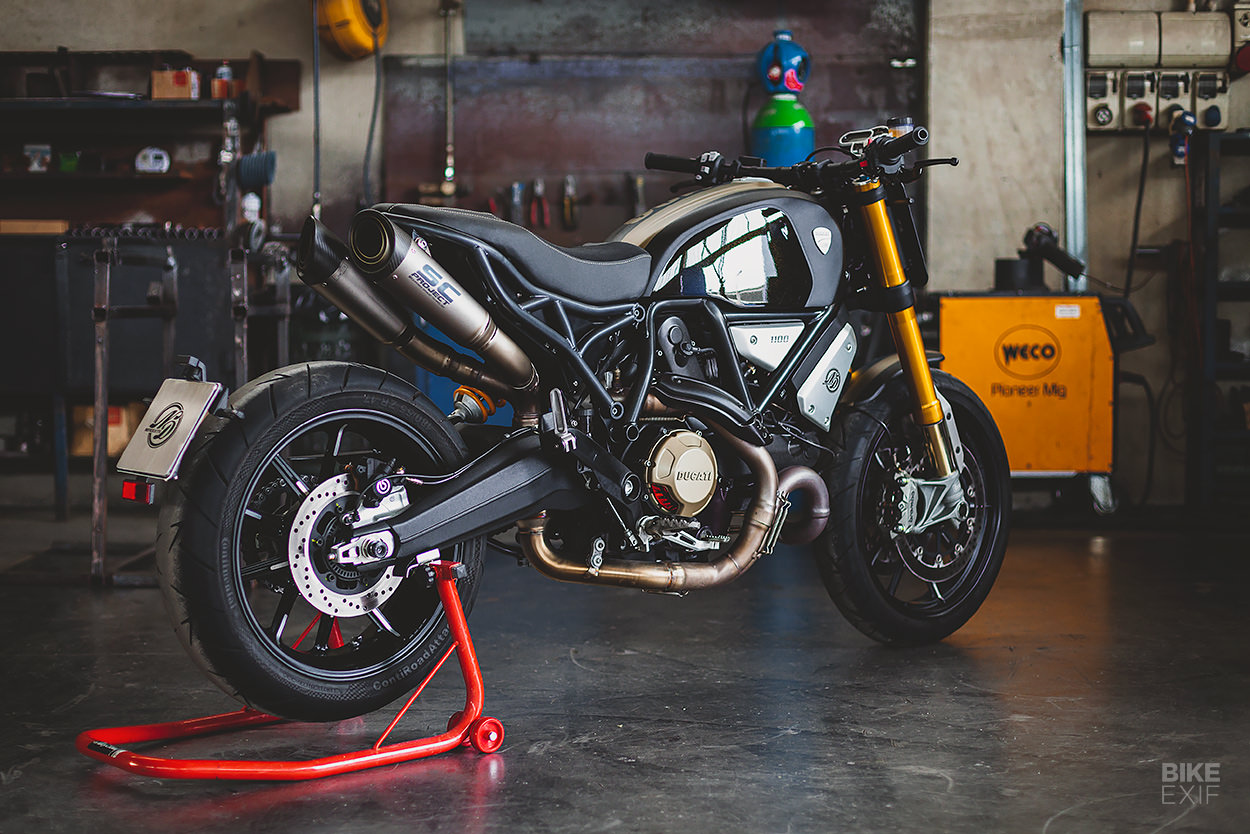 The first big job was to redesign the rear end. The Scrambler’s stock subframe was replaced with custom made trellis unit, bolted to the original’s attachment points. It’s actually a two part frame that bolts together, and was designed to work around the stock electronics box so that nothing had to be relocated.

A custom seat was made by first editing the stock seat pan, before shaping the foam and upholstering it. Next, the exhaust headers were modified to tuck a pair of SC Project mufflers in high and tight. Lower down, a hand-made license plate bracket mimics the subframe’s design. 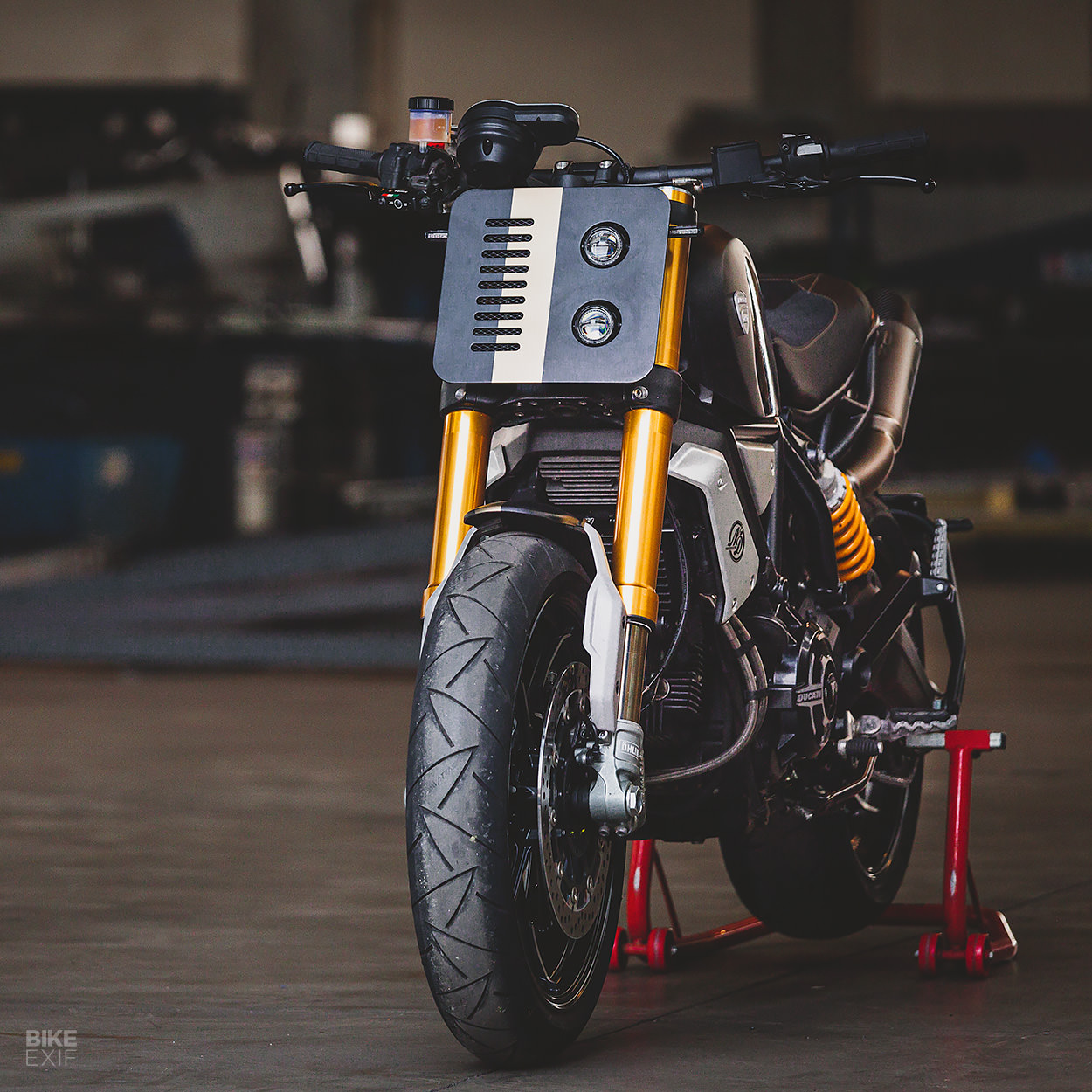 The fuel tank looks stock at a glance, but it’s actually been narrowed by over an inch on each side. It was more than just a quick cut-and-shut job though, since the team put the side sections through a bead roller to add some contours to them.

Up front is a flat track-style aluminum number board, with two Highsider LEDs to light the way. The front end also wears low drag bars, and the original front fender, trimmed. 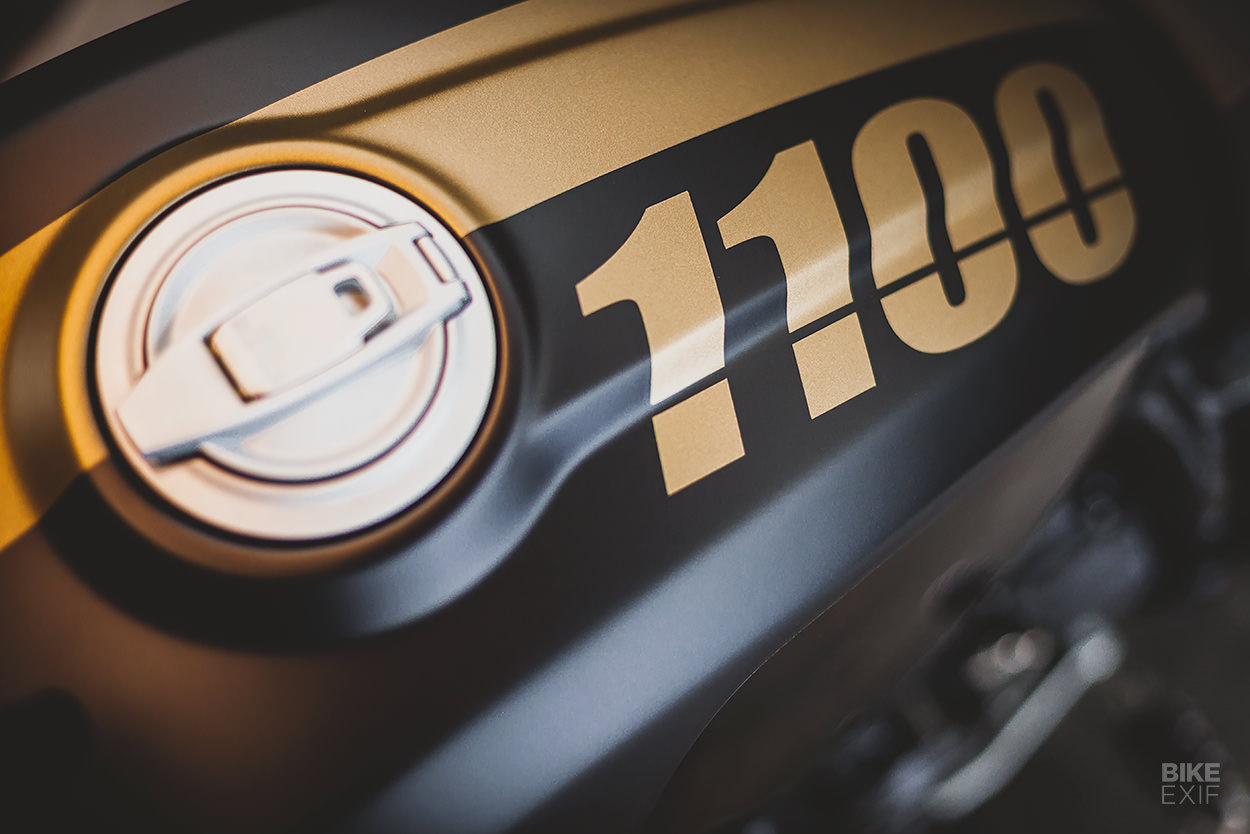 The Scrambler 1100 is quite a looker out of the box—but this one’s just the right amount more radical. Bravo! [Nico Dragoni Motociclette | Images by Manuel Croci] 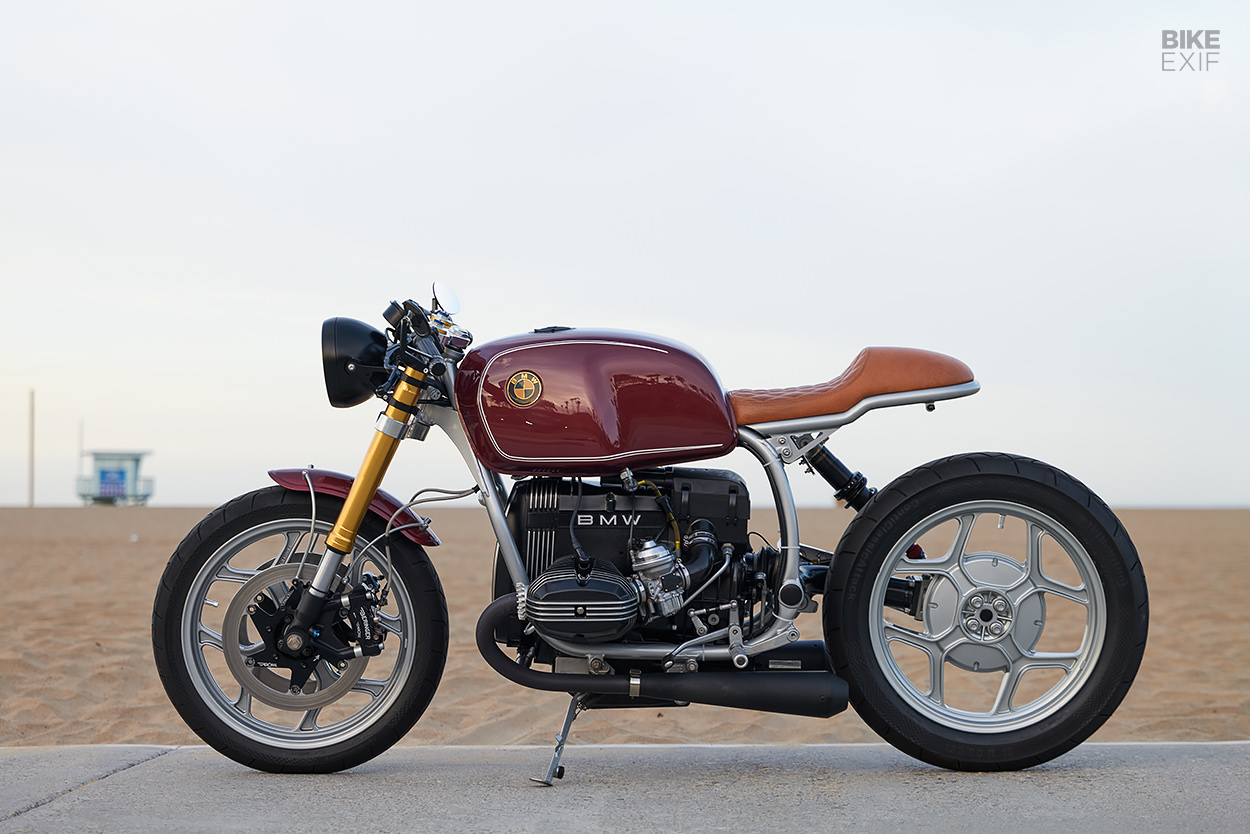 BMW R80 by Matt Watkinson Classic BMW boxers are a great choice for first-time custom bike builders, because they’re easy to take apart, and there’s no shortage of inspiration out there. Even so, it’s remarkable how many ‘bad’ BMW customs we see—you need a sharp eye and good judgment if you want yours to stand out from the rest. And California-based Matt Watkinson has both. 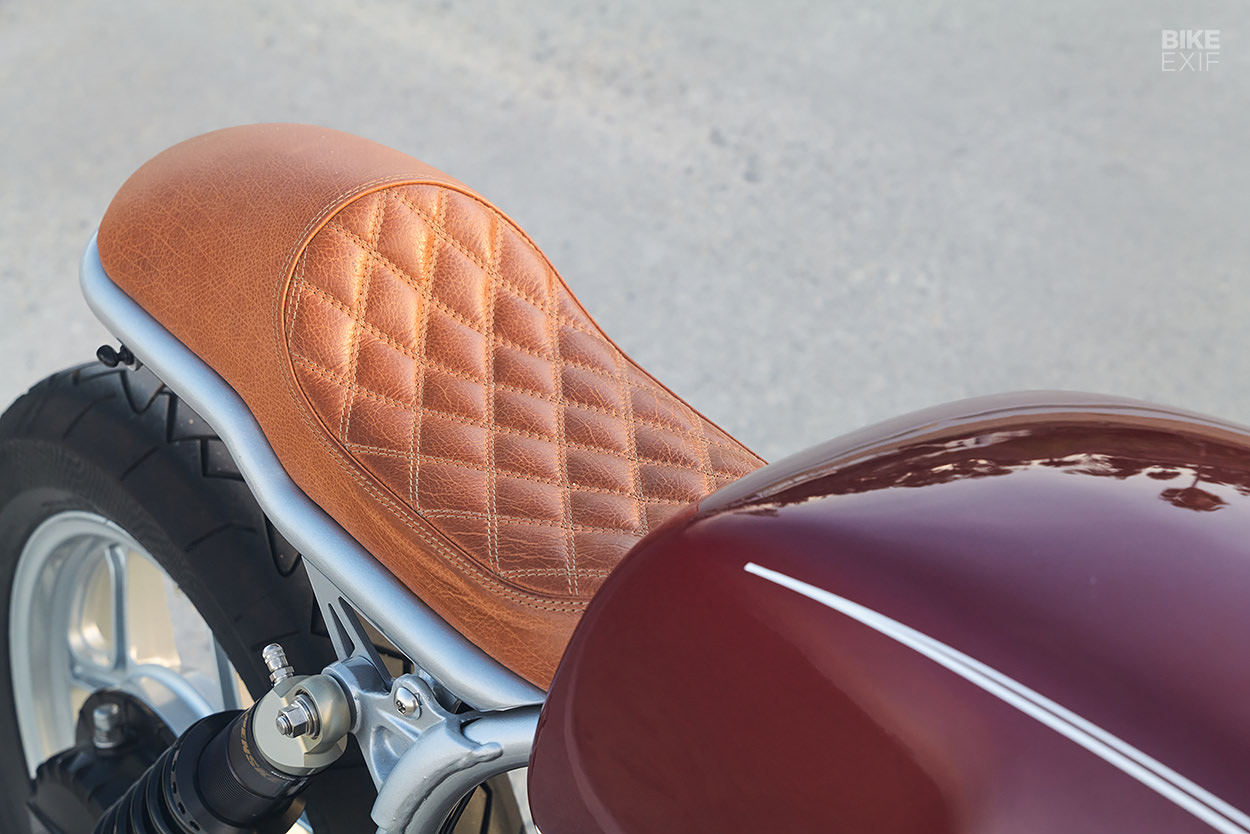 This ultra-sharp BMW R80 café racer is his first build, and it’s a total stunner. His goal was to “create something very clean and minimal that rides as well as it looks,” with quality parts and attention to detail high on the list. He’s done most of the work himself too, despite having nothing more than an Ikea toolkit when he started.

Part of Matt’s winning formula is the fact that he’s picked key bolt-on parts from the best in the business. The subframe and battery box are plug-and-play parts from WalzWerk in Germany, while the seat’s leatherwork was done by the ever-popular Silvermachine in the Netherlands. 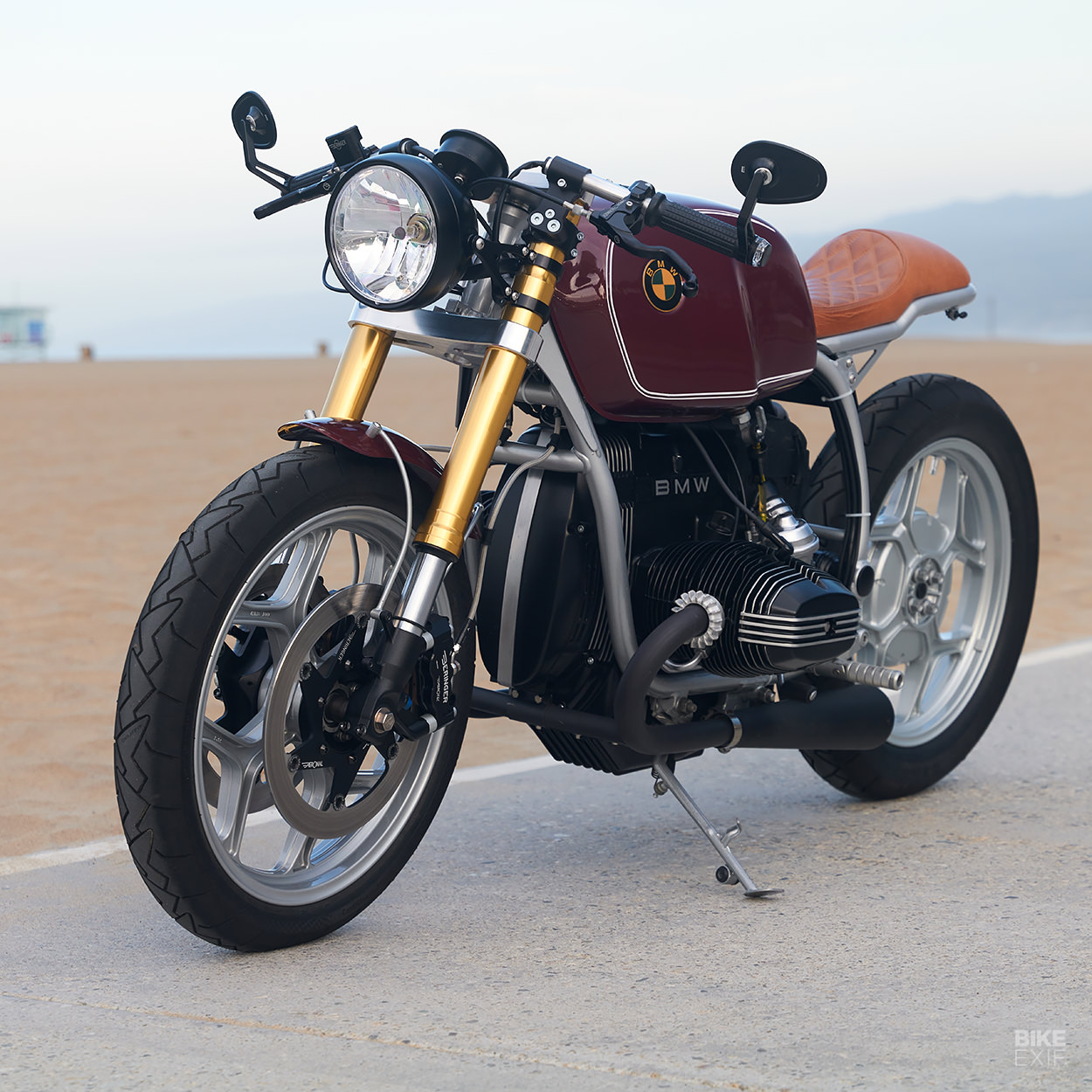 Cognito Moto supplied the yokes, front fender and foot pegs. The yokes hold a set of Suzuki GSX-R forks—re-valved and re-sprung by Ed Sorbo at Lindemann Engineering. There’s a custom-built Penske shock out back, and Matt’s installed a full Beringer brake set with Venhill lines.

The cockpit is sporting the sort of parts you’d usually on find on high-end pro builds. The list includes Woodcraft clip-ons, a Domino throttle, and Renard Speed ​​Shop switches that share space with the Beringer controls. 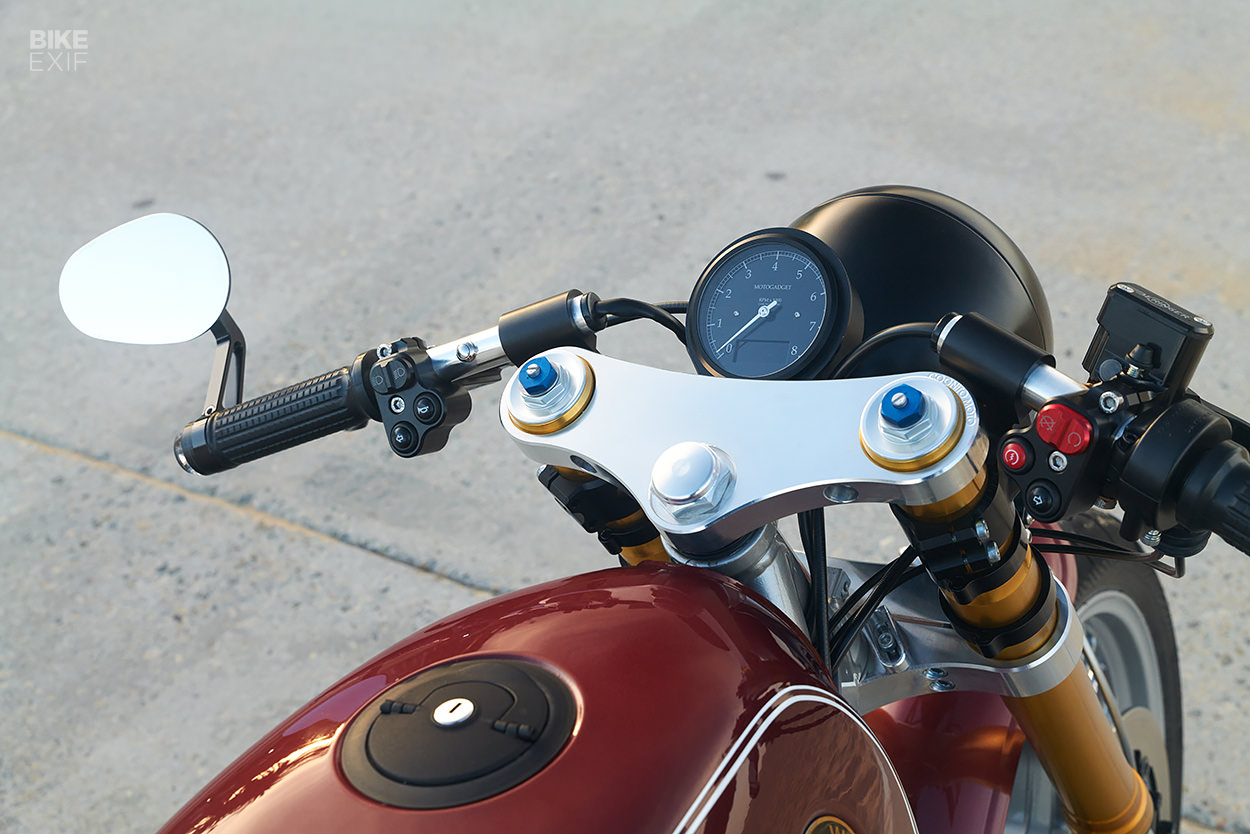 There’s a full complement of Motogadget parts too; The grips, speedo, turn signals, mirrors, keyless ignition and electronic control box all come from the German brand. 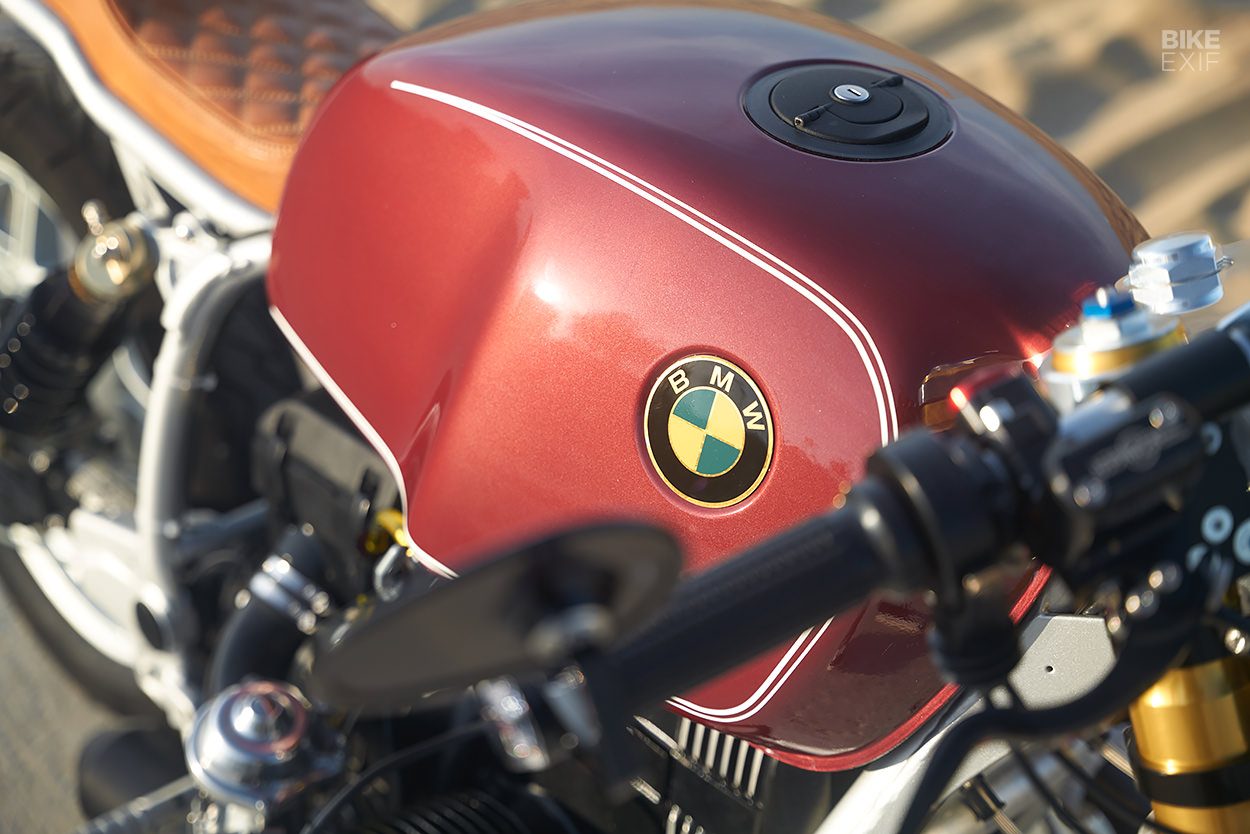 The engine, gearbox and carbs have all been rebuilt, the frame’s been powder coated, and the headers and off-the-shelf mufflers have been Cerakoted. But the tank is original—right down to its paint and the patina on the roundels. (The yellow fuel lines are a nod to how old BMW badges age.)

It’s a stellar build—and not just for a first timer. Matt clearly has the goods, and we’re looking forward to whatever he builds next. [Matt Watkinson] 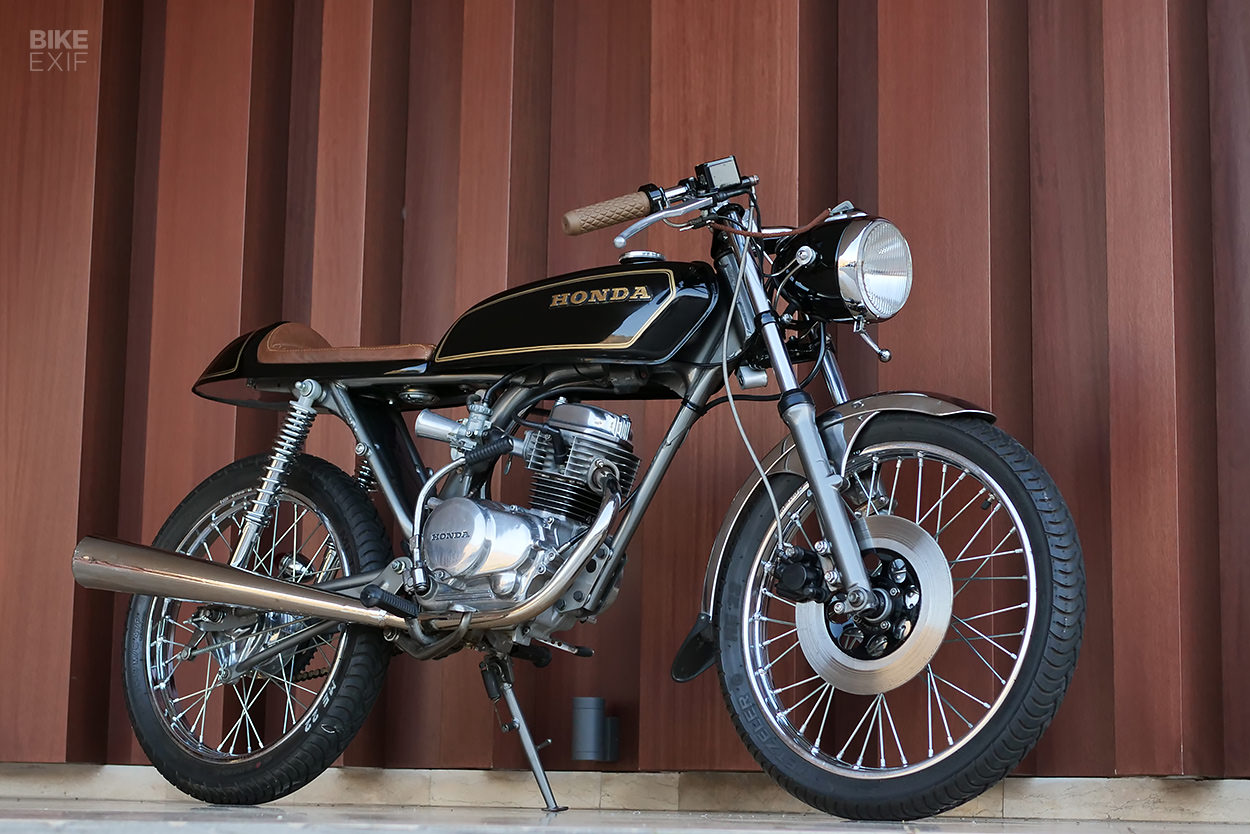 Honda CB50 by Pantelis Mannessis Small bikes appeal to different riders in different ways. But Pantelis Manesis in Kalamata, Greece loves them for myriad reasons. “Call it a money shortage, call it the sheer joy of traveling around at 25 mph, or the lack of a big racing track where I live,” he quips.

That’s why when he stumbled upon a beautiful, but rusted, Honda CB50 that used to be a rental bike, he couldn’t resist snapping it up. The café racer scene was taking off in Greece at the time—so a custom build was on the cards for sure. 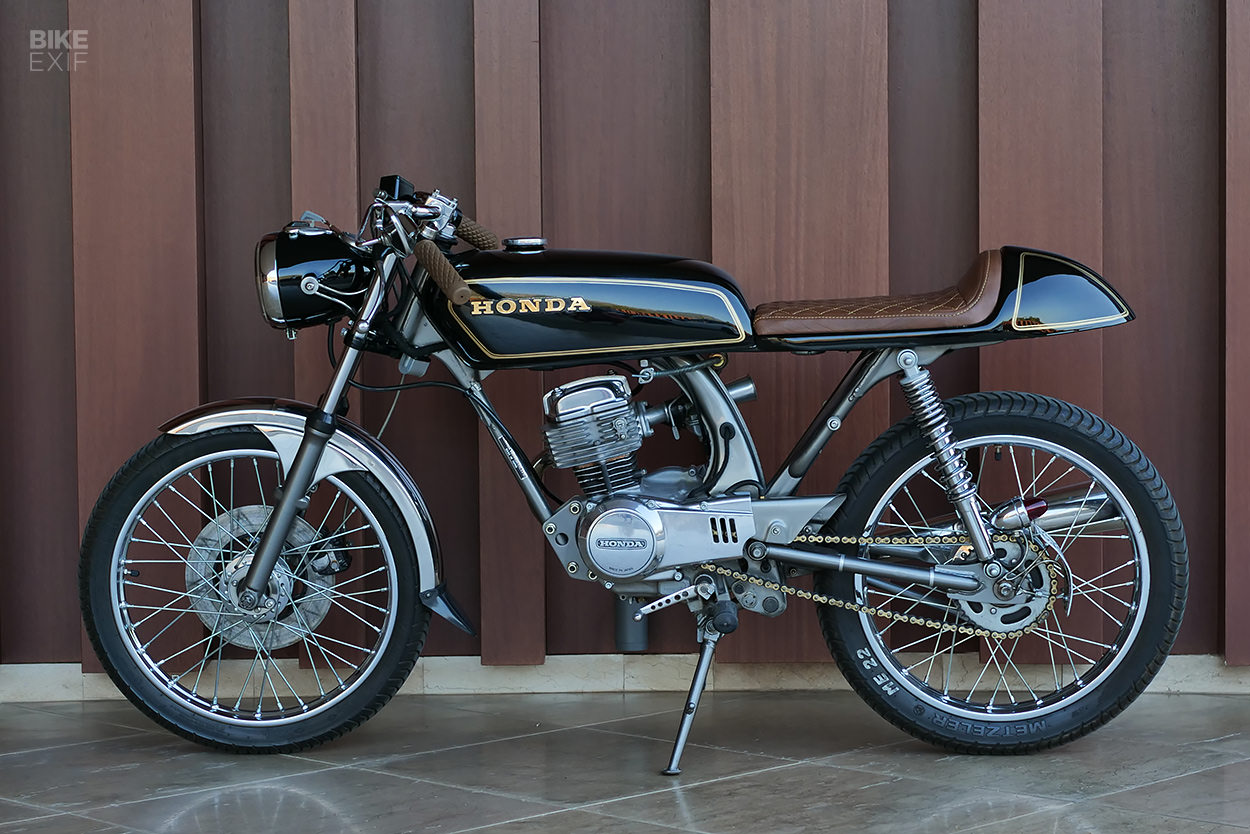 But Pantelis had one major challenge to overcome first: he had no money with which to fund the build. “I asked my boss at the coffee business I was working at as a technician if he would like a cafe racer,” he says. “The answer was ‘yes,’ and there was the money.”

The other challenge was finding some key components that had been rusted beyond redemption. But after calling everyone he could think of in Greece, he finally managed to source a good gas tank, a decent used OEM exhaust and a pair of slightly more modern disc brake-ready forks. 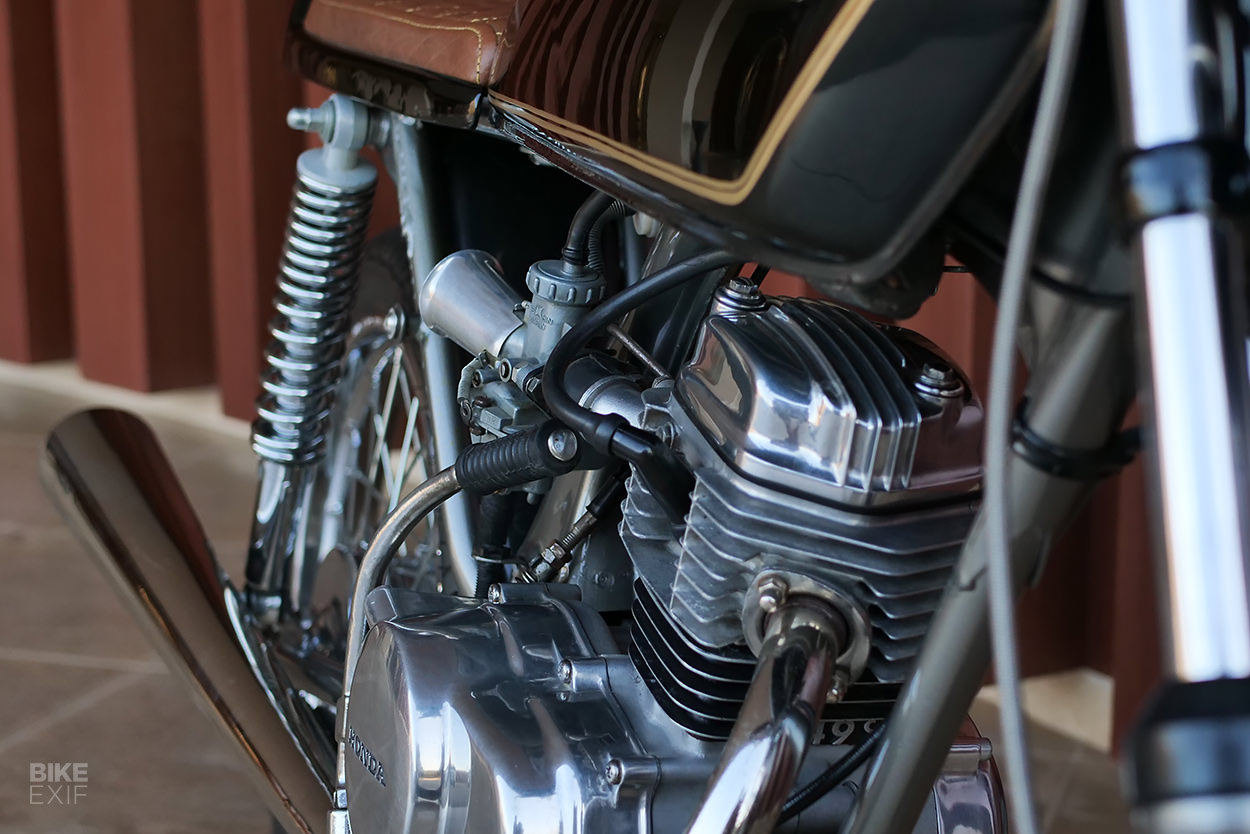 Things took off from there. Pantelis sandblasted everything, chopped a few bits off and sent the aluminum parts off for polishing. The engine got a top end rebuild with a bunch of new parts, but the bottom end just needed a new capacitor, a contact point and a cam chain. “Nothing else… because Honda,” he says.

Wheels from a Japanese-made moped were laced up with new spokes, and a modified C-Racer tail section was bolted on top of a handmade aluminum battery tray. The wiring was done from scratch, and features a Kreidler Florett headlight with the tacho embedded in it, and an aftermarket Jeep turn signal for a taillight. 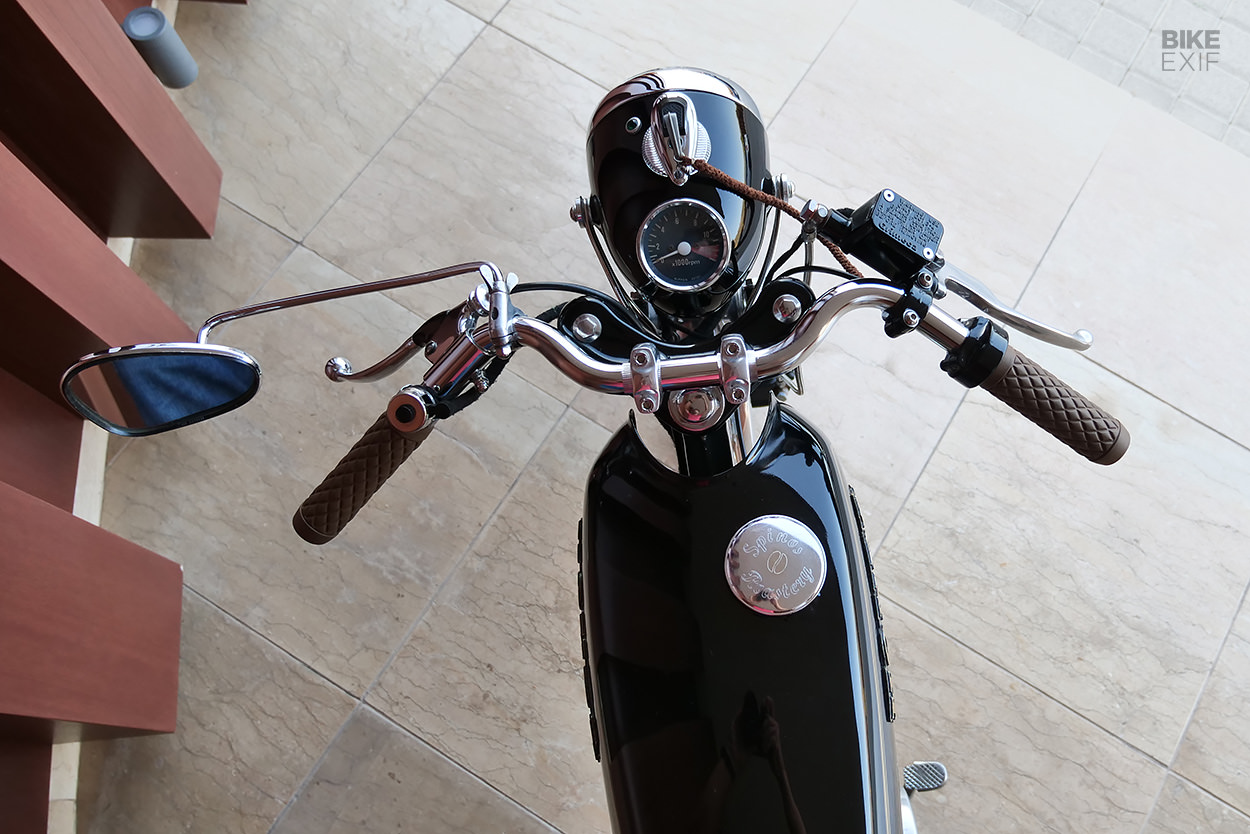 There are too many scalped parts to mention—from the Zundapp handlebars to smaller bits like the front fender, levers, brake master cylinder and light switch. A few parts, like the number plate bracket, were made by manipulating stainless steel with a vice and a blowtorch.

The shiniest bits are the Aston Martin inspired paint (done by a friend who’s a pro), the gold pin stripes by Tiki Tony, and the Biltwell Inc. grips that were gifted to Pantelis by Nicko at The Real Intellectuals. 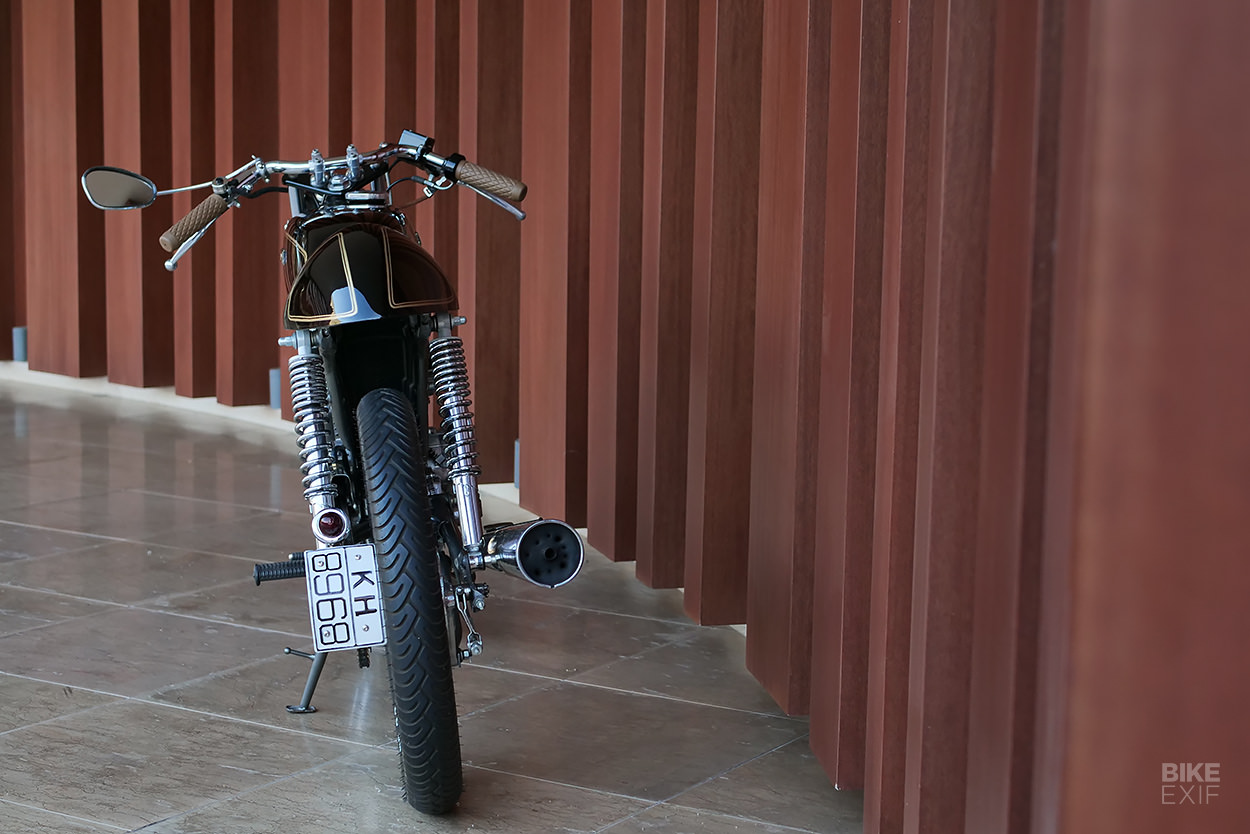 All done and dubbed ‘Stretto’ (because it’s small and strong), this cheeky little 50 cc racer revs into the high 13s and clocks 70 km/h [43.5 mph]. Oh, and did we mention that Pantelis built it in his spare bedroom? [Pantelis Manessis Instagram | Images by Mike Vryonis] 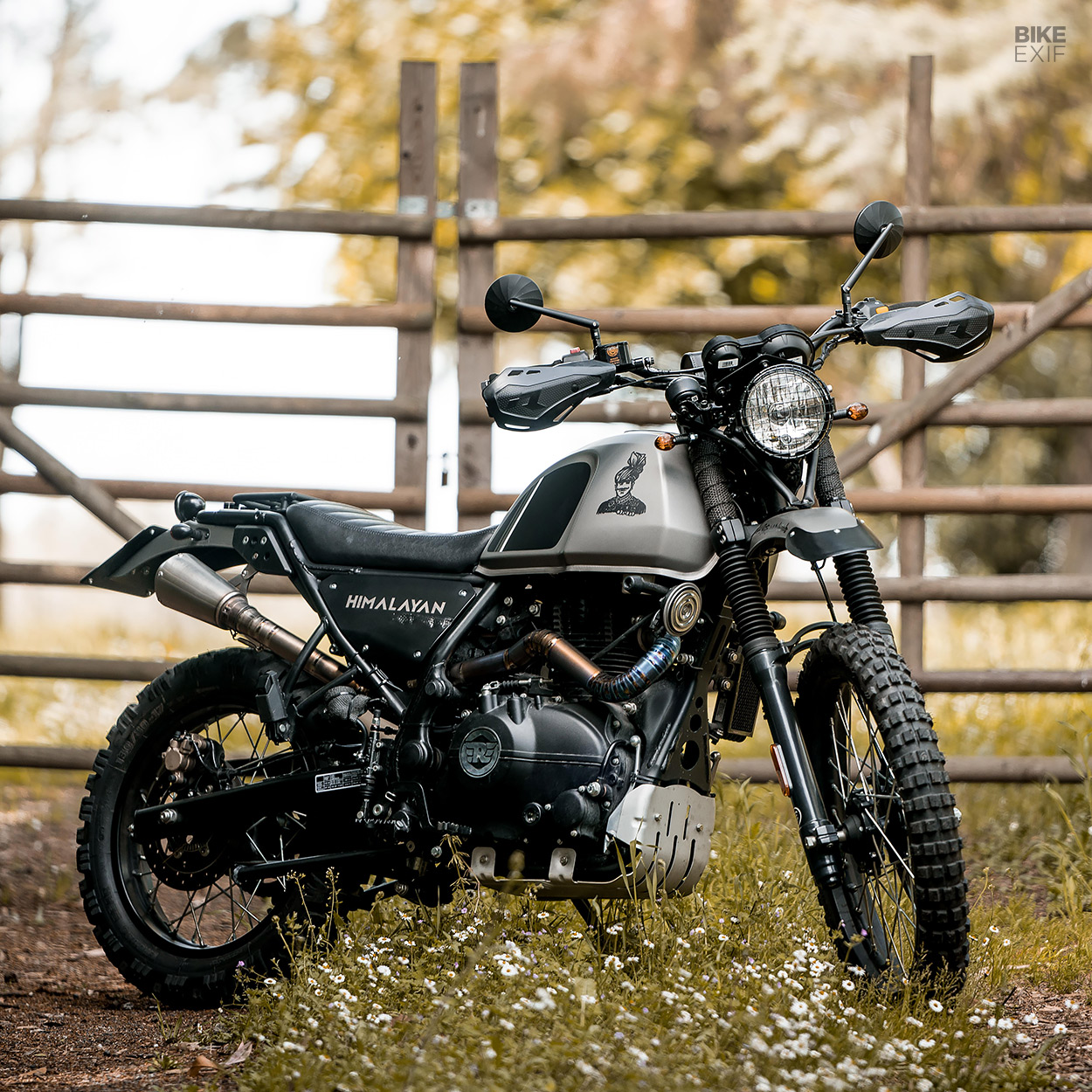 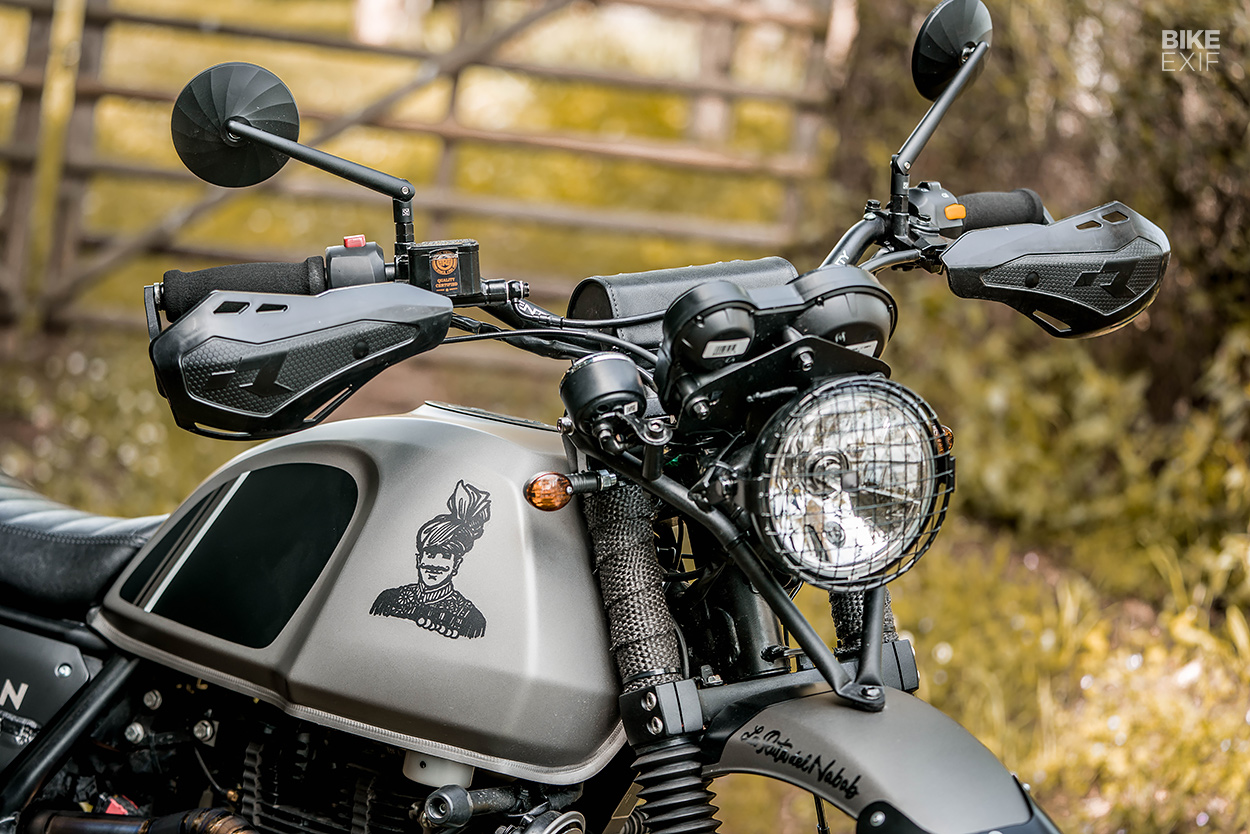 Tough and capable were higher on Giorgio’s list than pretty, so that’s where he focused his efforts.

The first step was to remove the Himalayan’s clunky front fairing and subframe, and replace it with new brackets to hold the OEM headlight and clocks, and a new front fender. Behind those are a new set of tapered handlebars, mounted on risers and fitted with handguards. 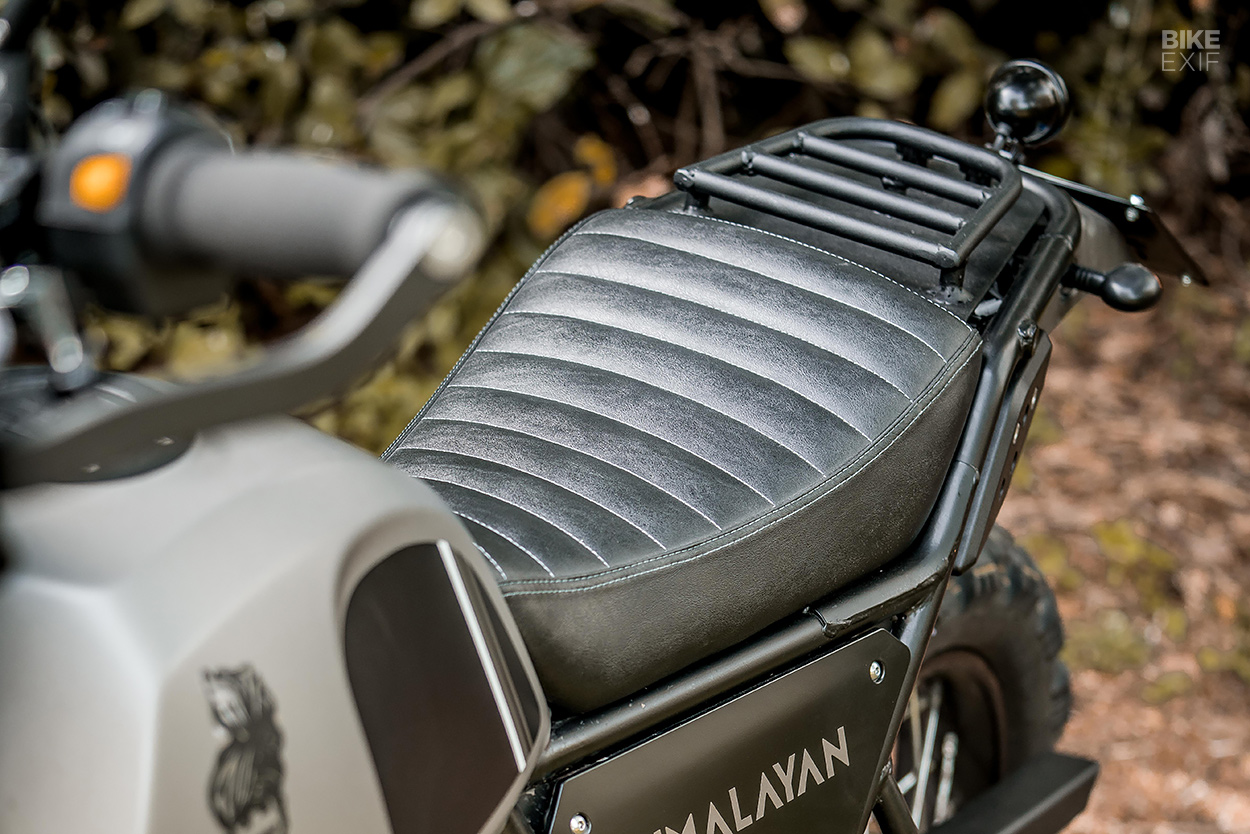 Further back is a custom-made luggage rack where the passenger seat used to be. The tail end’s been tidied up with a new license plate mount, and a vintage-style LED taillight.

Giorgio also installed a remapped ECU and a handcrafted titanium exhaust system, to put a little more pep in the Royal Enfield’s step. The ABS system has been deleted too, and the brake hoses upgraded to Frentubo parts.

Finished off with a simple titanium gray paint job, a burly sump guard and Mitas knobblies, this Himalayan looks like it’d be fun to rip through the desert on. Happy trails, Giorgio! [Giorgio de Angelis Instagram | Images by Victoria Dusko] 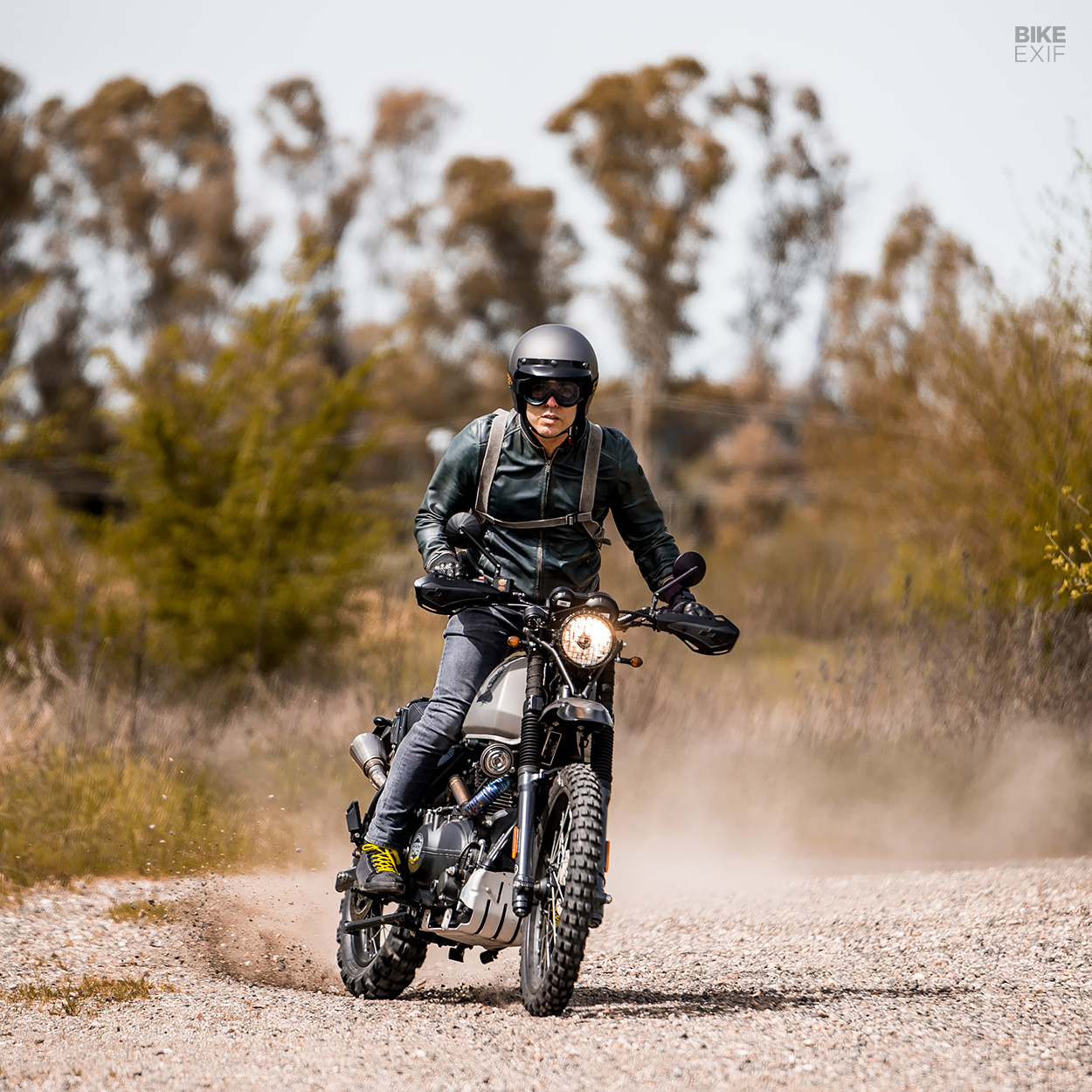