Small electric motorcycles face off against big-bore icons this week. In one corner, a custom electric commuter from Indonesia, and a golf-themed Super73 S2. In the other, a picture perfect Katana and a breathtaking Norvin. 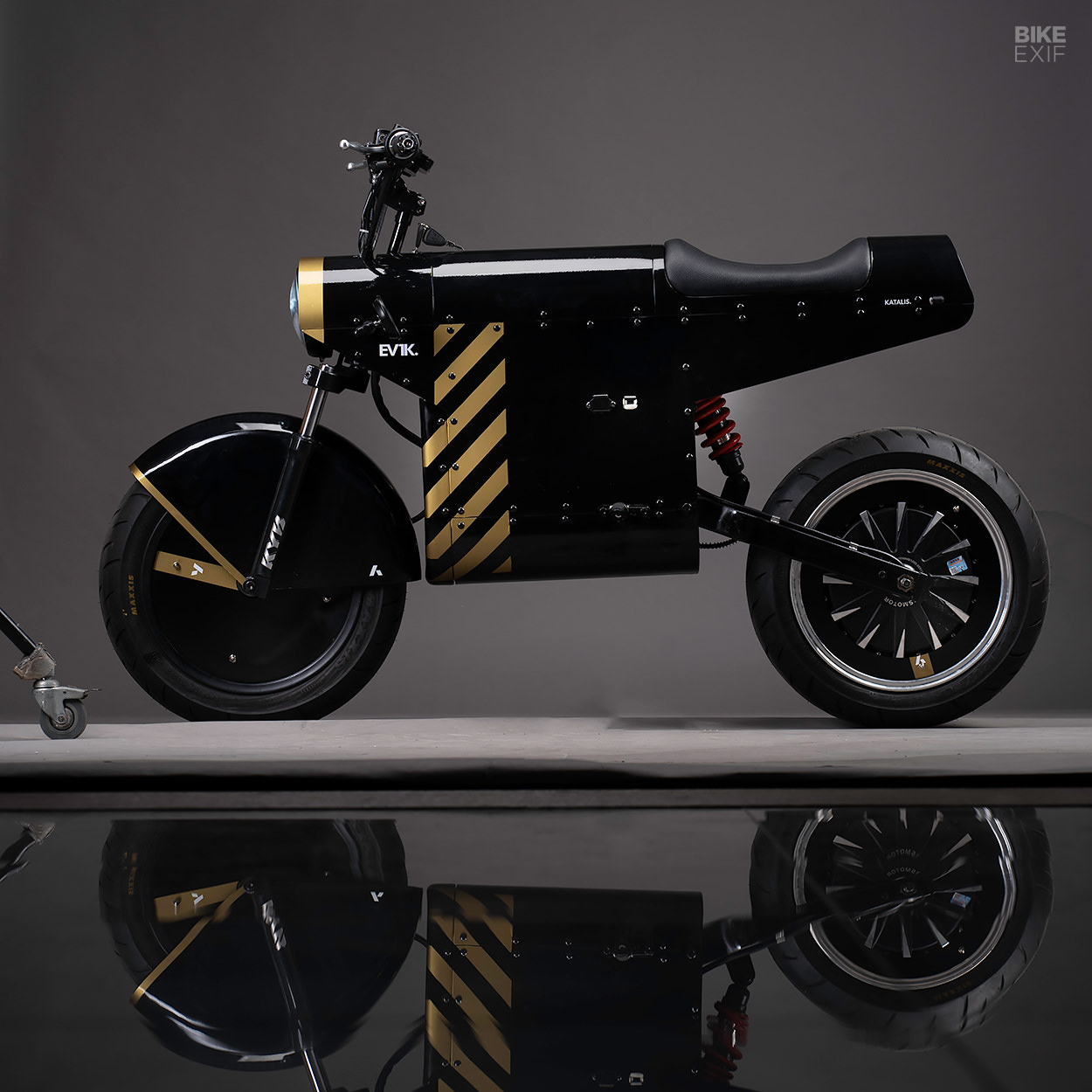 EV1K electric motorcycle by Katalis Company We’ve enjoyed watching Katalis’ foray into electric mobility unfold. They’re a multi-disciplinary design studio based just south of Jakarta, Indonesia, with a keen interest in motorcycles. Their first electric bike, the EV.500, was a hit—and now they’ve pushed the concept one step further with the EV1K. 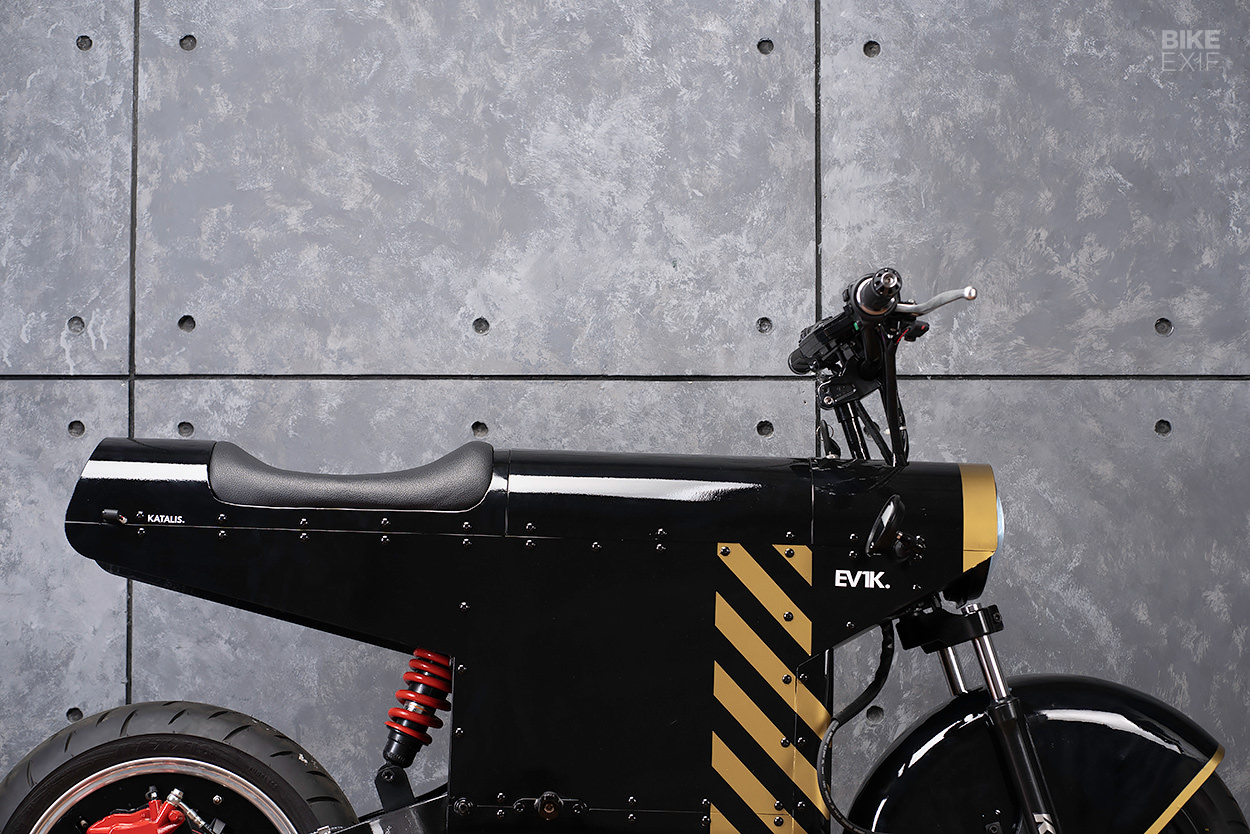 Like its predecessor, the EV1K is a compact electric bike, wrapped in aluminum bodywork that blends sci-fi elements with cues taken from wartime aircraft. It’s not a direct copy of the EV.500 though, and it’s clear that Katalis have refined the design in key places.

More importantly, the EV1K’s drivetrain’s been upgraded—from a 500W motor to a 1500W hub-mounted unit. It’s reportedly good for a 65 km/h [40 mph] top speed, which is respectable for a bike this size. Juice comes from a 48 volt Lithium battery, good for a range of 50 km [31 miles]. 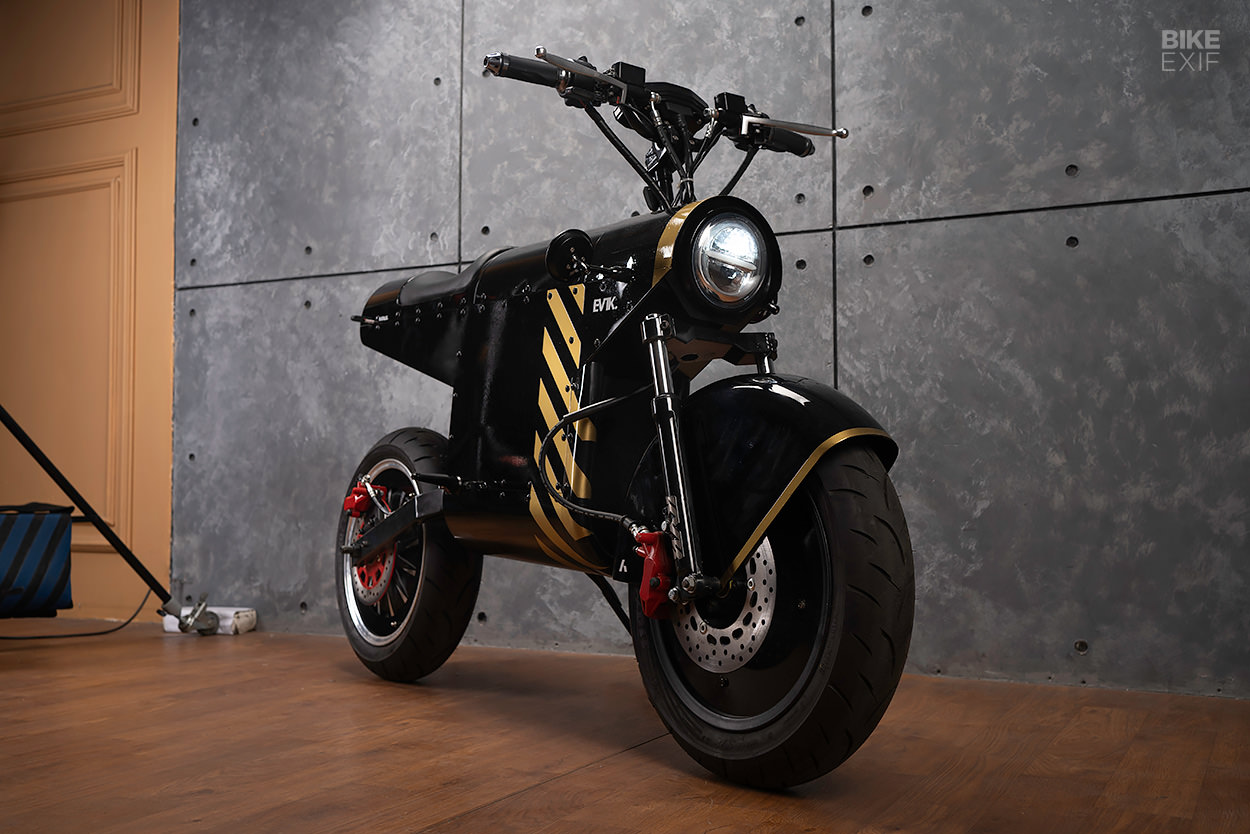 The EV1K is a city bike, through and through. It sports 14” wheels at both ends, with a tight wheelbase of 1120 mm. A set of conventional forks hold up the front end, with a redesigned mono-shock system at the back. The ground clearance is pretty decent too; 255 mm.

It’s a slick looking design too, wrapped in black and gold with an LED headlight poking out the front, and a taillight tucked into the rear cowl. Finishing parts include low-mounted mirrors, discreet LED turn signals and extended bar risers to put the handlebars in a sensible spot. 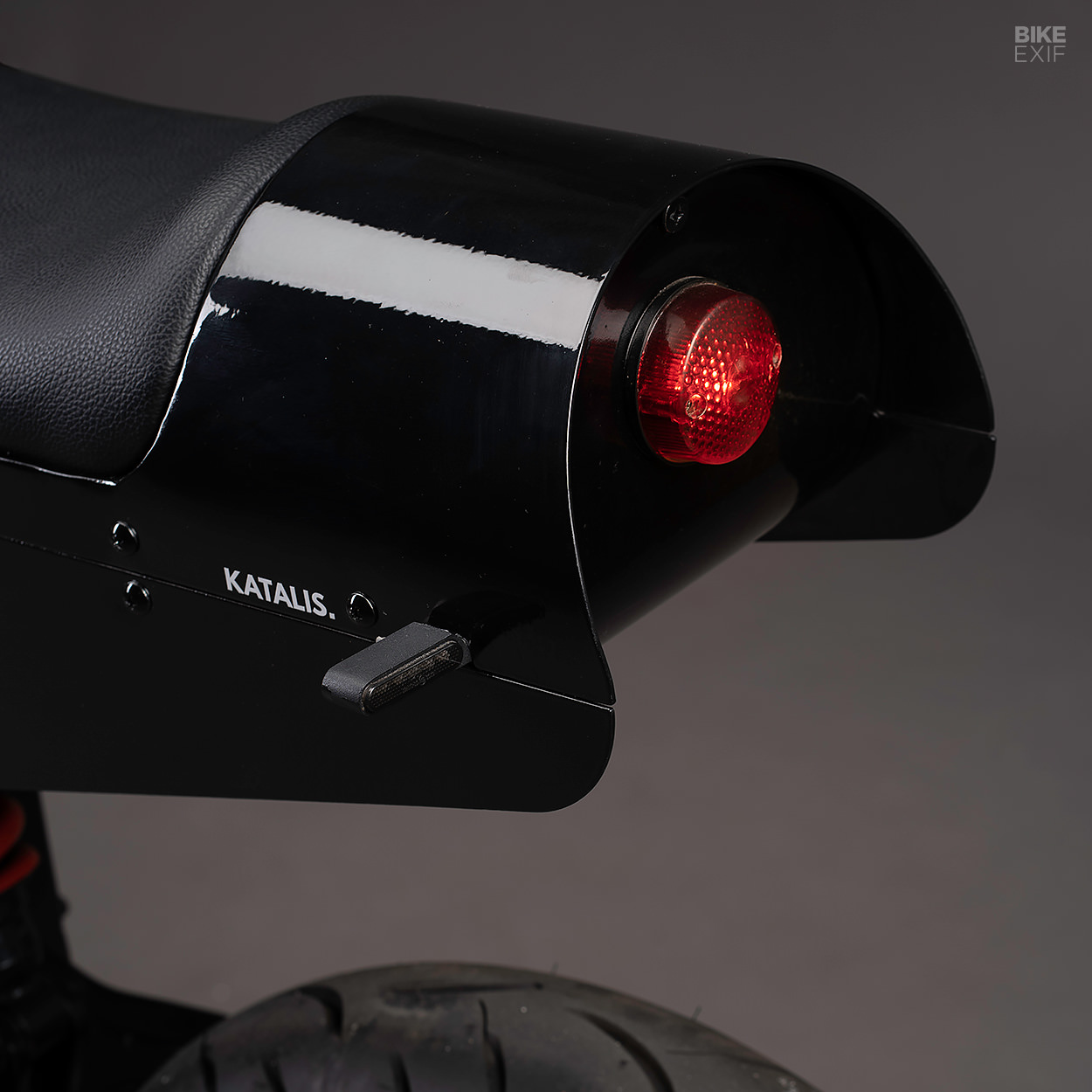 Katalis are also planning to do a limited production run of these. As a quirky runabout that’ll look anything else parked outside your local cafe, would you be tempted? [Katalis Co. Instagram] 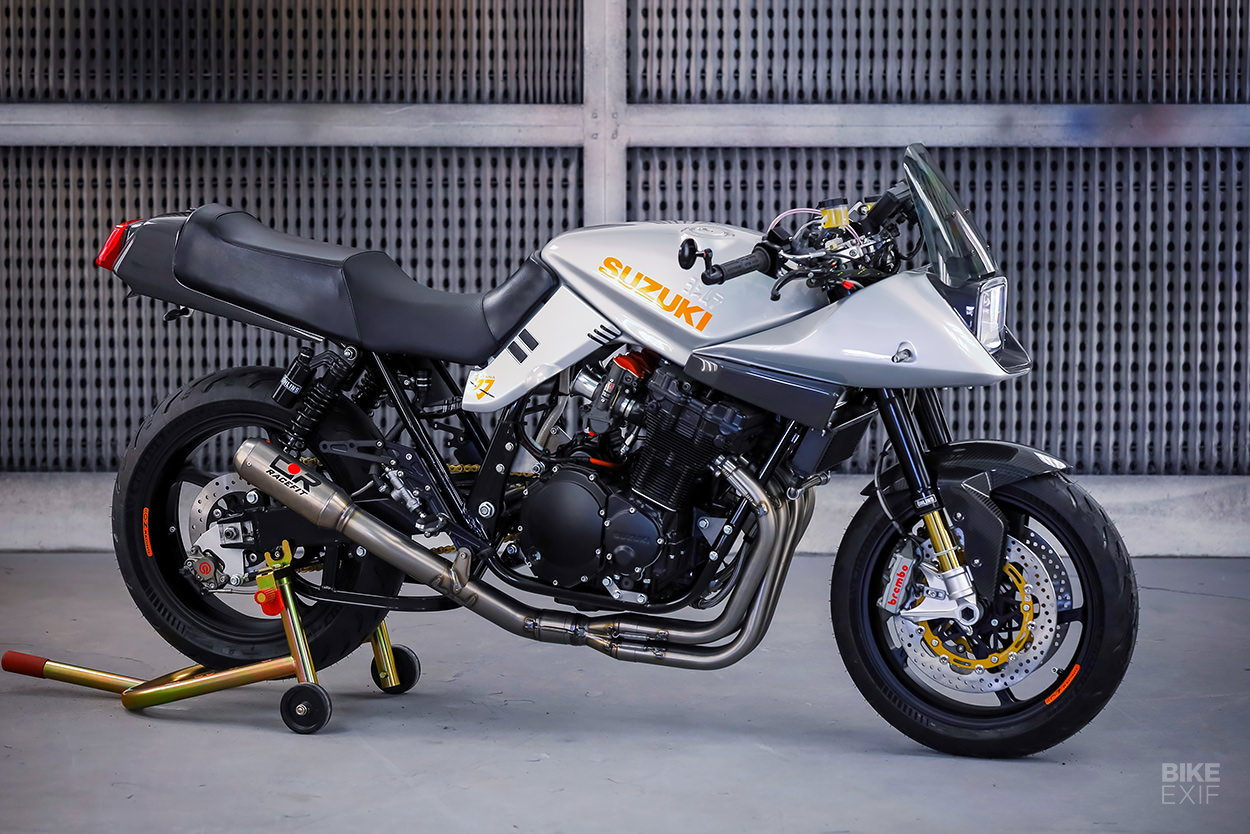 Suzuki Katana by dB Customs As far as restomods of iconic Japanese motorcycles go, Darren Begg’s creations sit high on the list. The Canadian builder not only loves them, but knows how to make them look amazing and go fast. And this gnarly Suzuki Katana is one of his best builds yet. 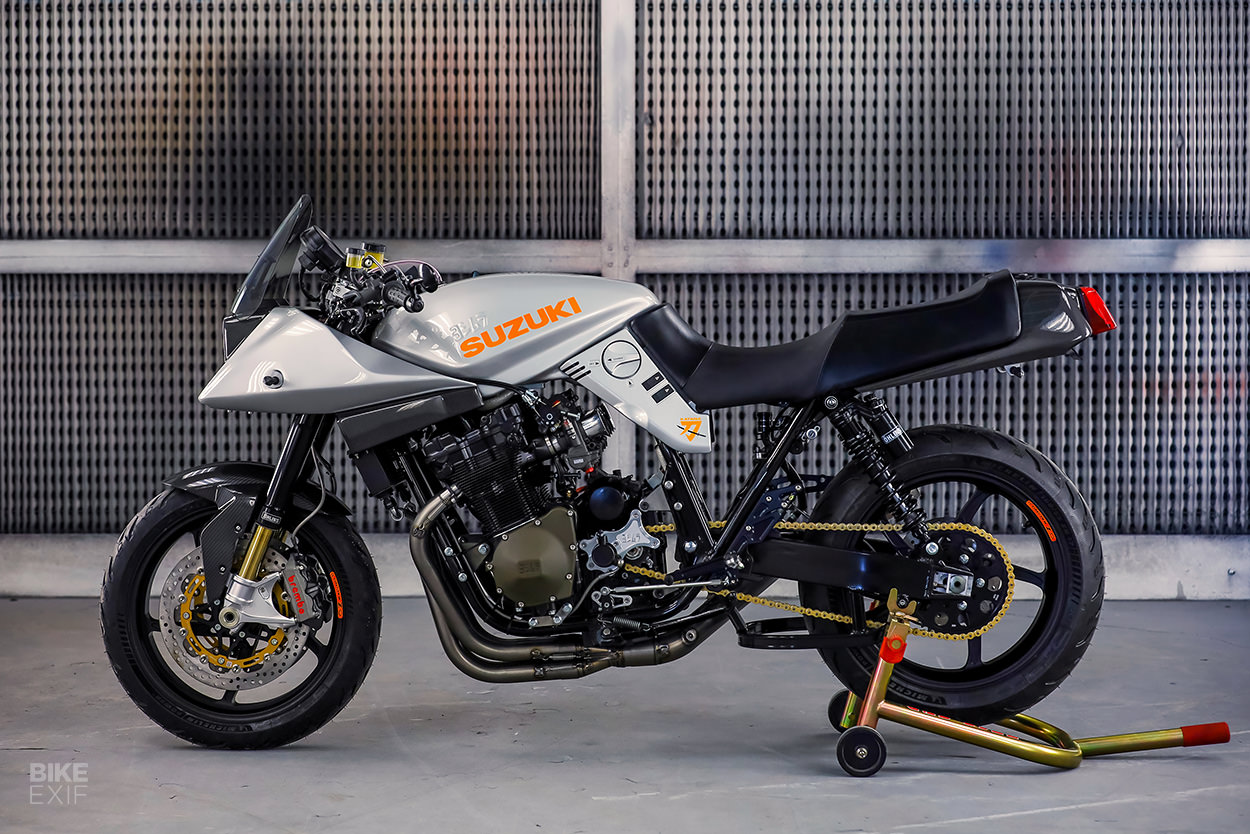 The Katana’s loaded with drool-worthy upgrades, and even features an engine swap—something we’ve come to expect from Darren. At its heart is a Suzuki GSX-R1127 power plant that’s been punched up to 1,216 cc, and features Megacycle cams, Wiseco pistons and a head that’s been reworked by Xtreme Motorsports. There’s also a Setrab oil cooler in the mix, plumbed with custom lines and fittings. 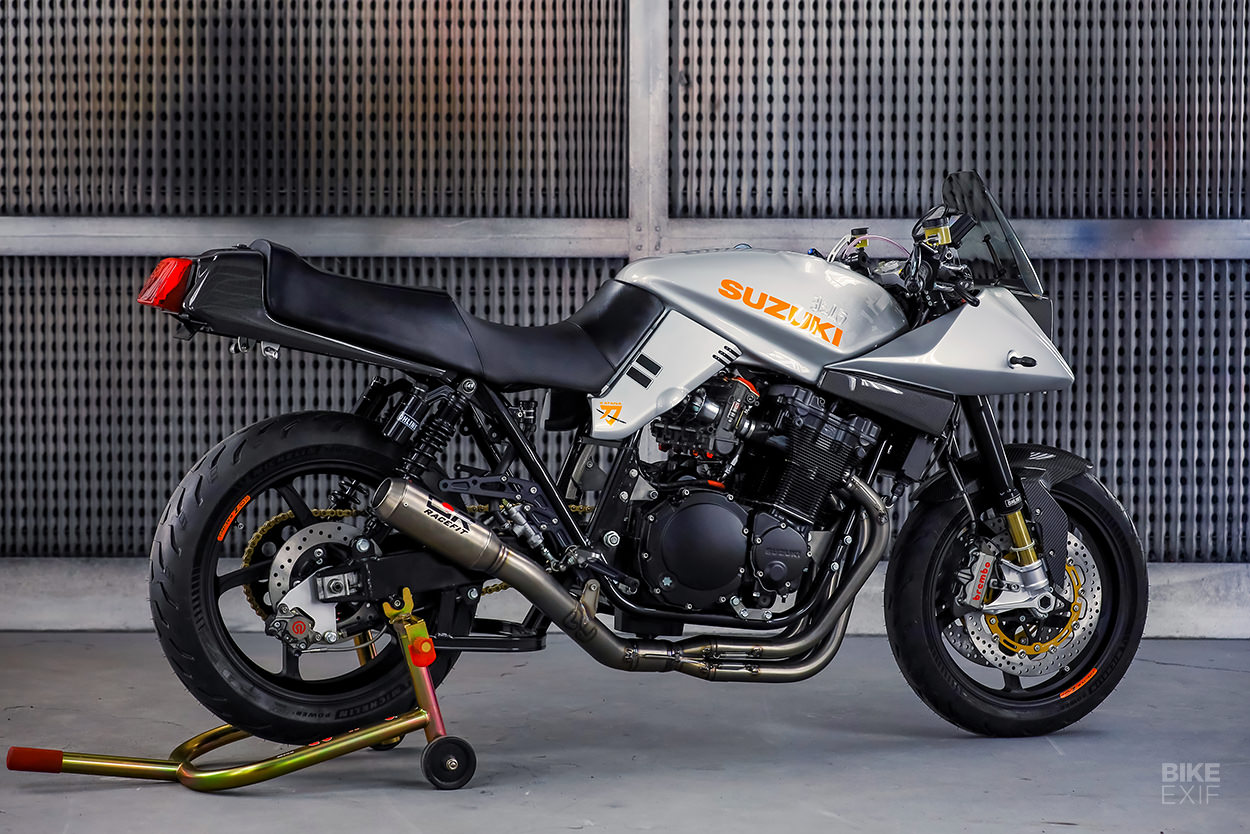 Feeding the engine is a row of Yoshimura carbs with velocity stacks. The four-into-one titanium exhaust system comes from Racefit, and absolutely looks the business.

The chassis hasn’t been neglected either. Darren fitted Öhlins suspension at both ends, and swapped the swingarm out for a Suzuki Bandit part. OZ Racing Piega R wheels, wrapped in Michelin Power 5 tires, are stopped by Brembo brakes with Spiegler lines. 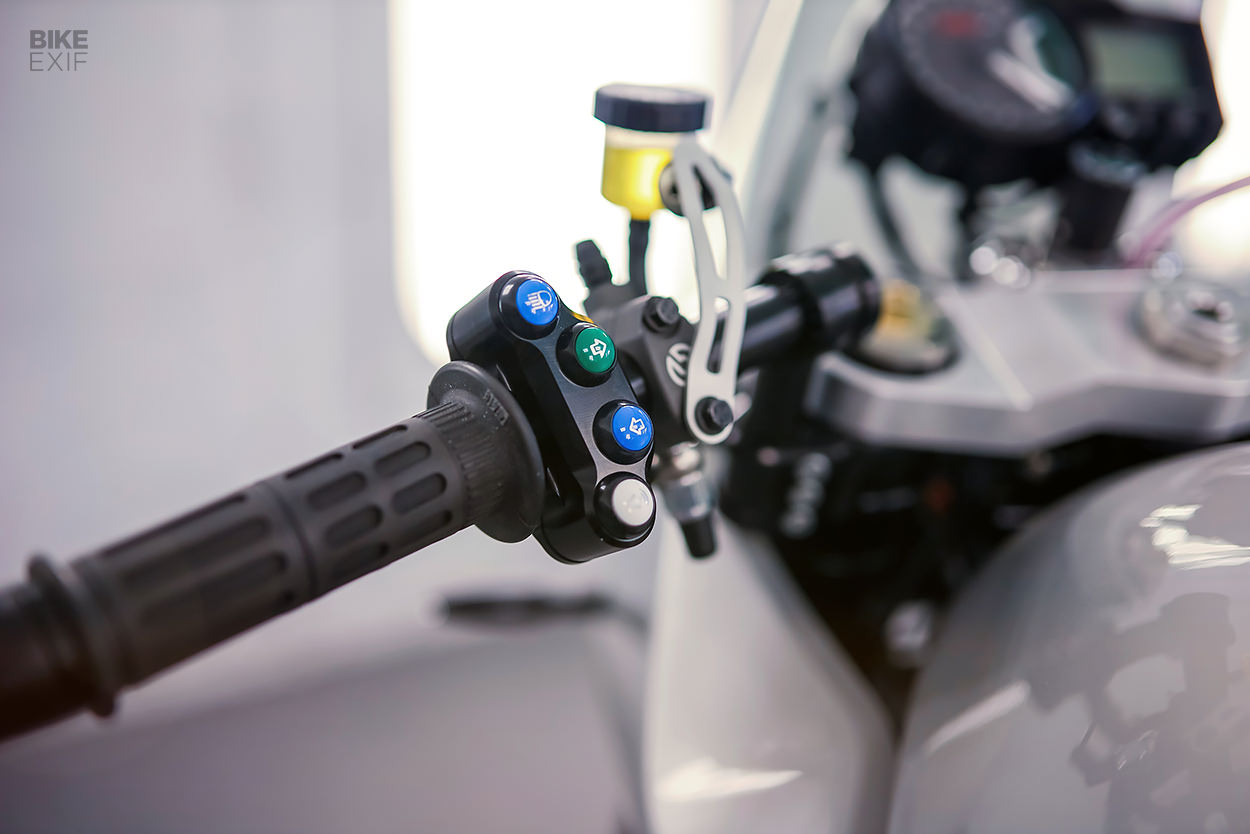 Up in the cockpit are custom yokes, new clip-ons, a Koso dash and MotoGP-inspired switchgear from Woodcraft Technologies. Smaller custom details abound; a smattering of carbon fiber here, a CNC-machined front sprocket cover there.

The livery is inspired too—a classic Katana silver, capped off with clear coated carbon fiber on the front fender and tail. The orange logos get their hue from the Lamborghini Huracan, and were painted on by Sketch’s Ink; no vinyl stickers here. 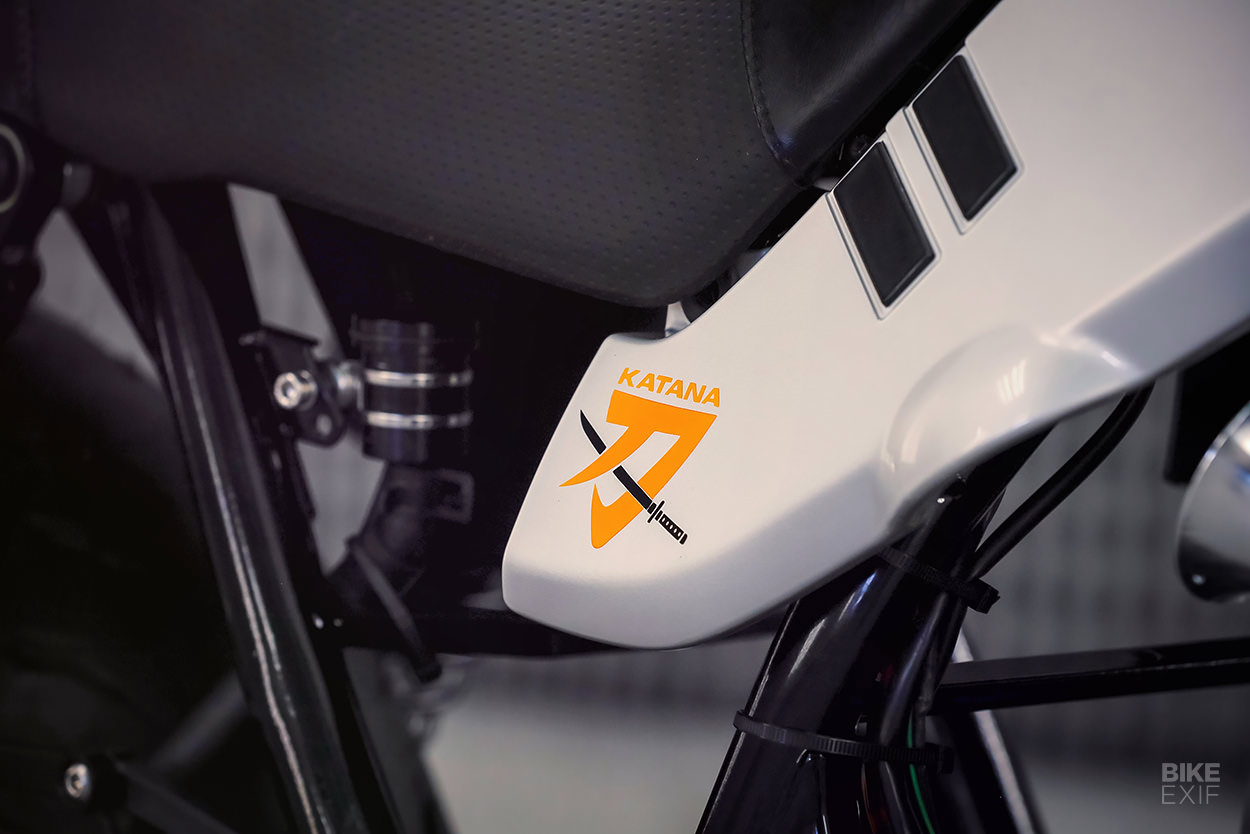 We’re suckers for Darren’s work and for restored Katanas, so this one’s a double whammy for us. Word has it that he’s working on another one, so our eyes are peeled. [dB Customs] 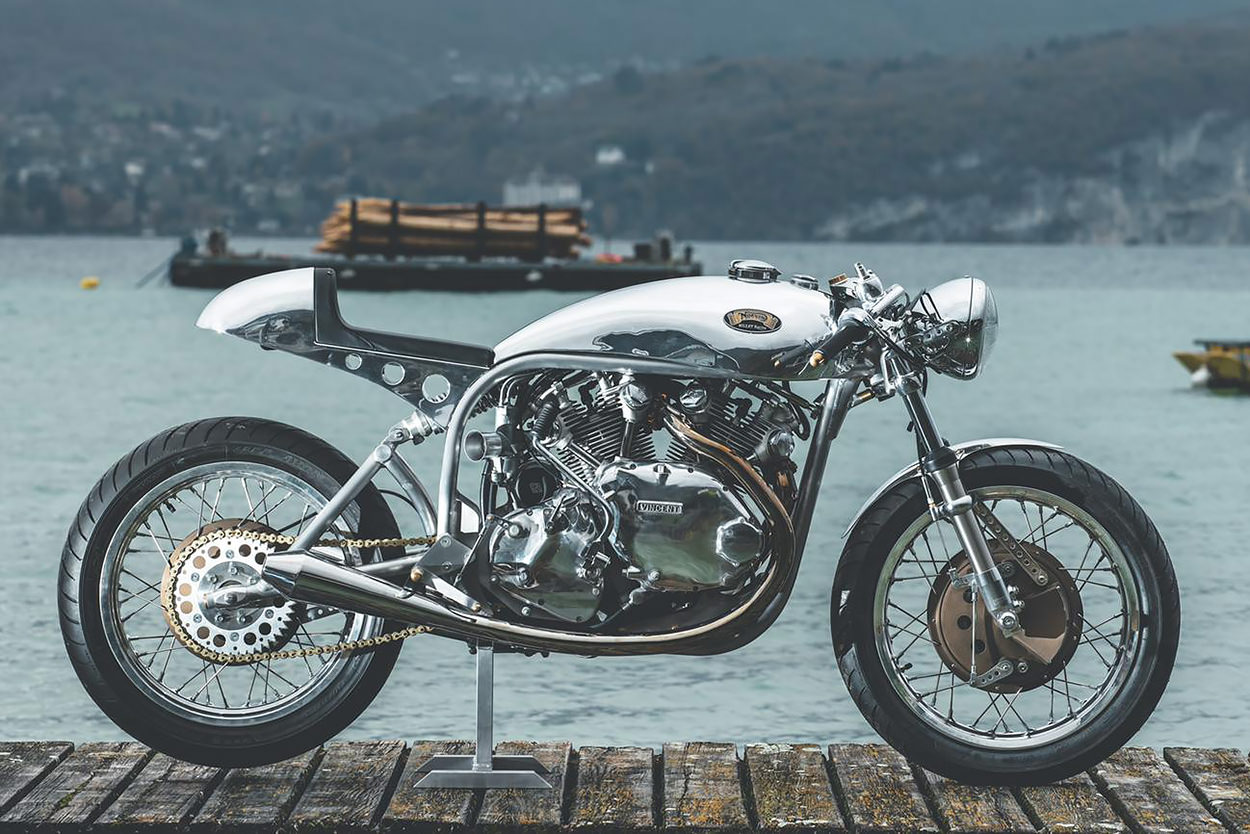 Norvin by Millet Racing Everyone knows what a Triton is, but have you ever laid eyes on a Norvin? It’s what you get when you cram a Vincent engine in a Norton frame—a concept pioneered by the legendary John Surtees back in 1954. And it’s been masterfully reinterpreted here, by brothers Sylvain and Franck Millet.

Their father, Jean-Louis Millet, was an accomplished sidecar racer, team manager, and the founder of the exhaust company, Millet Racing. He started this particular Norvin-inspired café racer project some time ago, but then sadly passed away. So his sons decided to complete it in his honor. 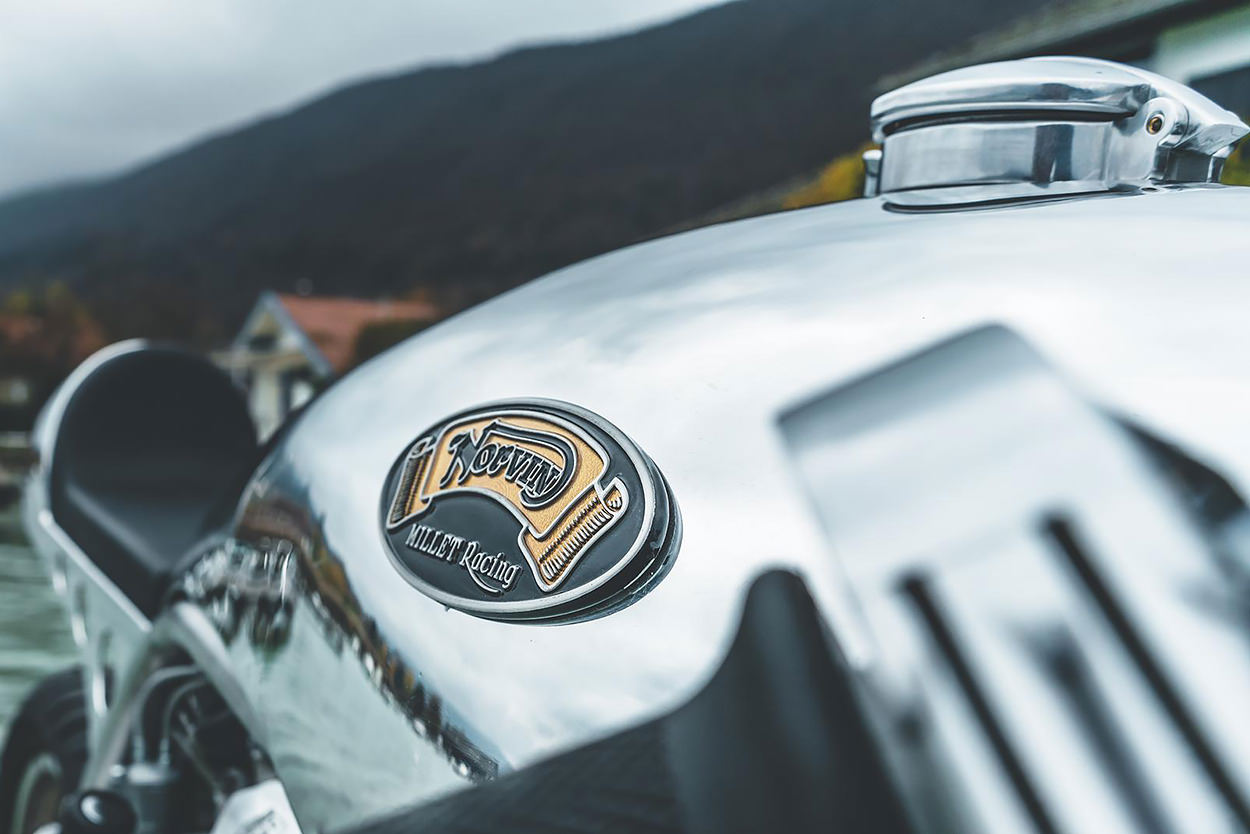 Unable to handle the project alone, they needed a team to work on the bike. So they appointed their father’s close friend, Bruno Silvestre, as team leader—then gathered together about 15 professionals to tackle various aspects of the project. It wasn’t hard, thanks to their father’s deep roots in the industry.

“The goal was to pay tribute to Jean-Louis Millet for all he was able to do for the motorcycling world,” says Sylvain. “We didn’t want to make just another Norvin, but a unique motorcycle.” 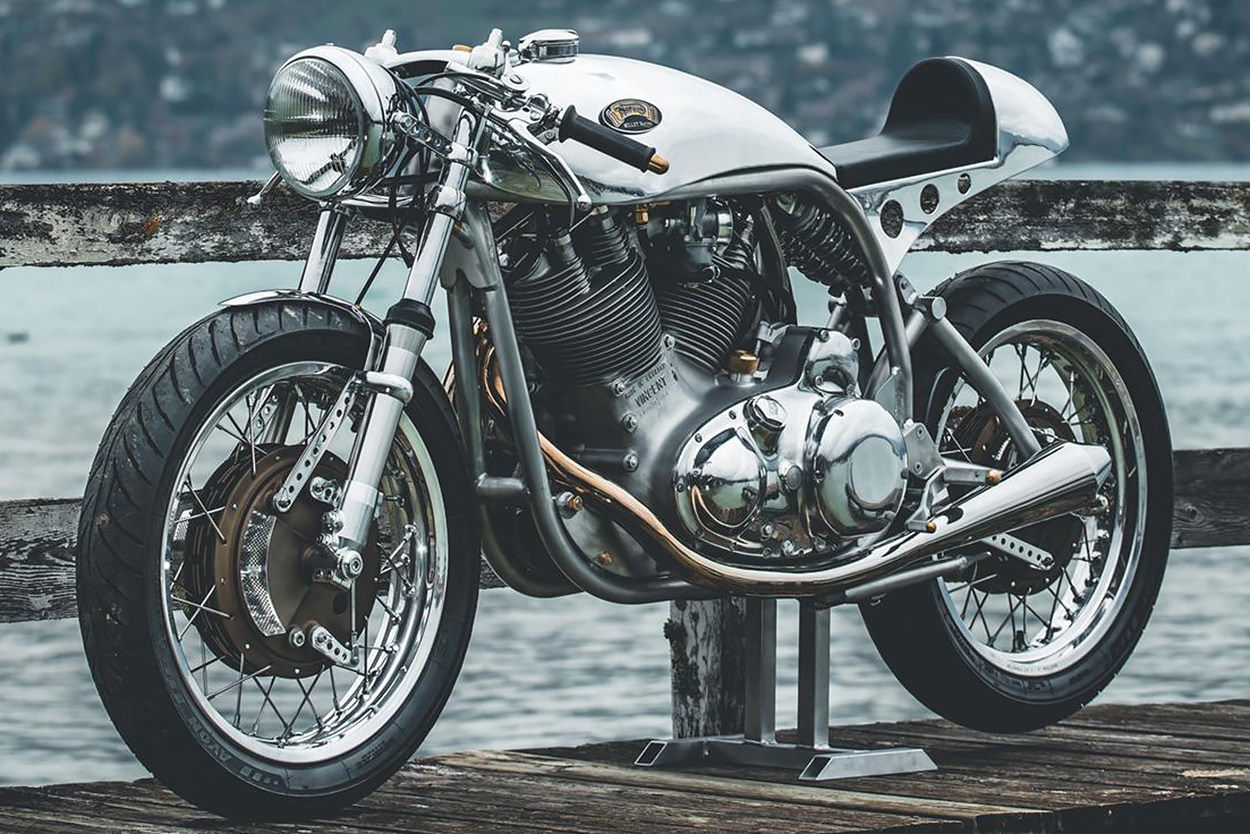 Built over three years, the bike features a 1,000 cc Vincent twin wedged into a custom aluminum frame that’s modeled on the iconic Norton Featherbed design. The team used 3D models to figure out how to cram the massive Vincent motor in there—and to work out the suspension geometry. There’s a custom swingarm out back too, hooked up via a bespoke suspension design that uses twin shocks tucked under the seat. 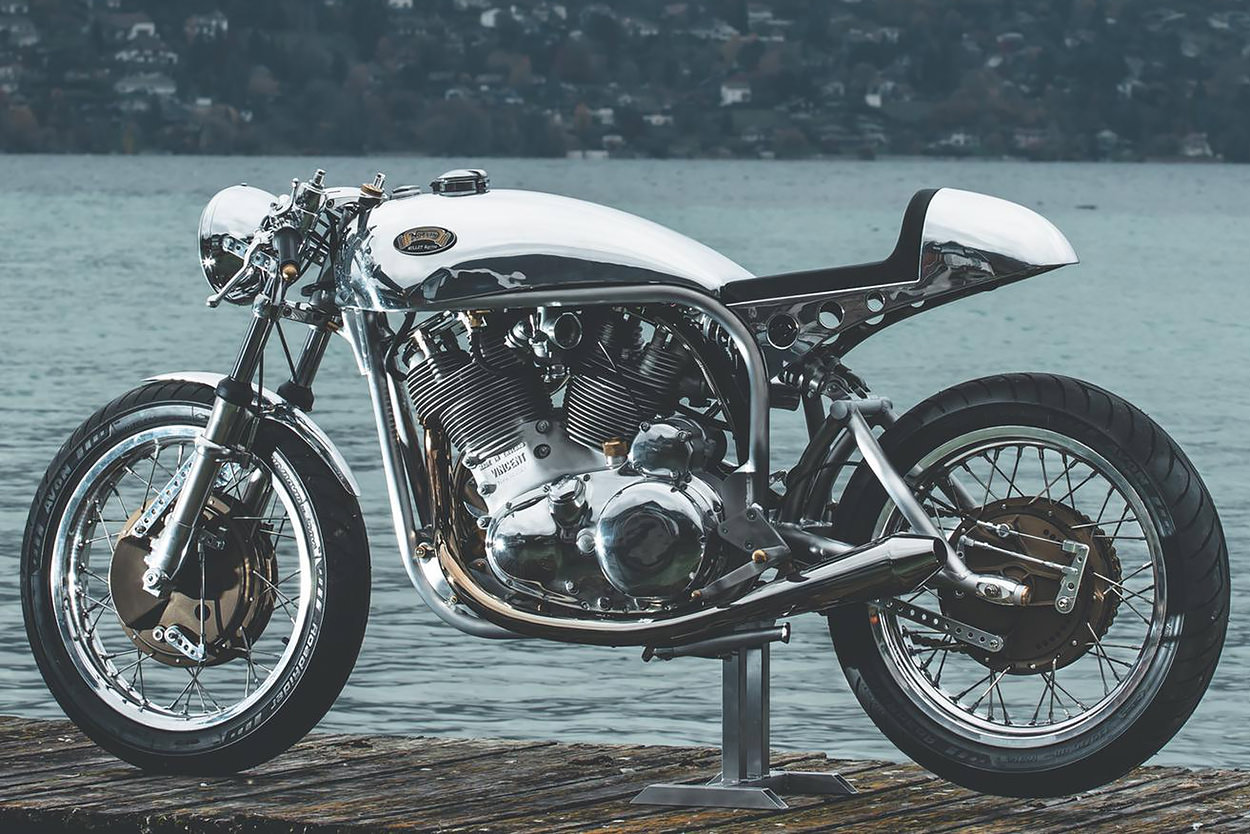 Most of the bike was built from scratch, with only a handful of off-the-shelf parts tying it together. It not only looks incredible, but weighs a paltry 330 pounds (dry) too.

As graceful as it is exotic, this Norvin is about as good as it gets. We’re sure Jean-Louis would be proud. [Via] 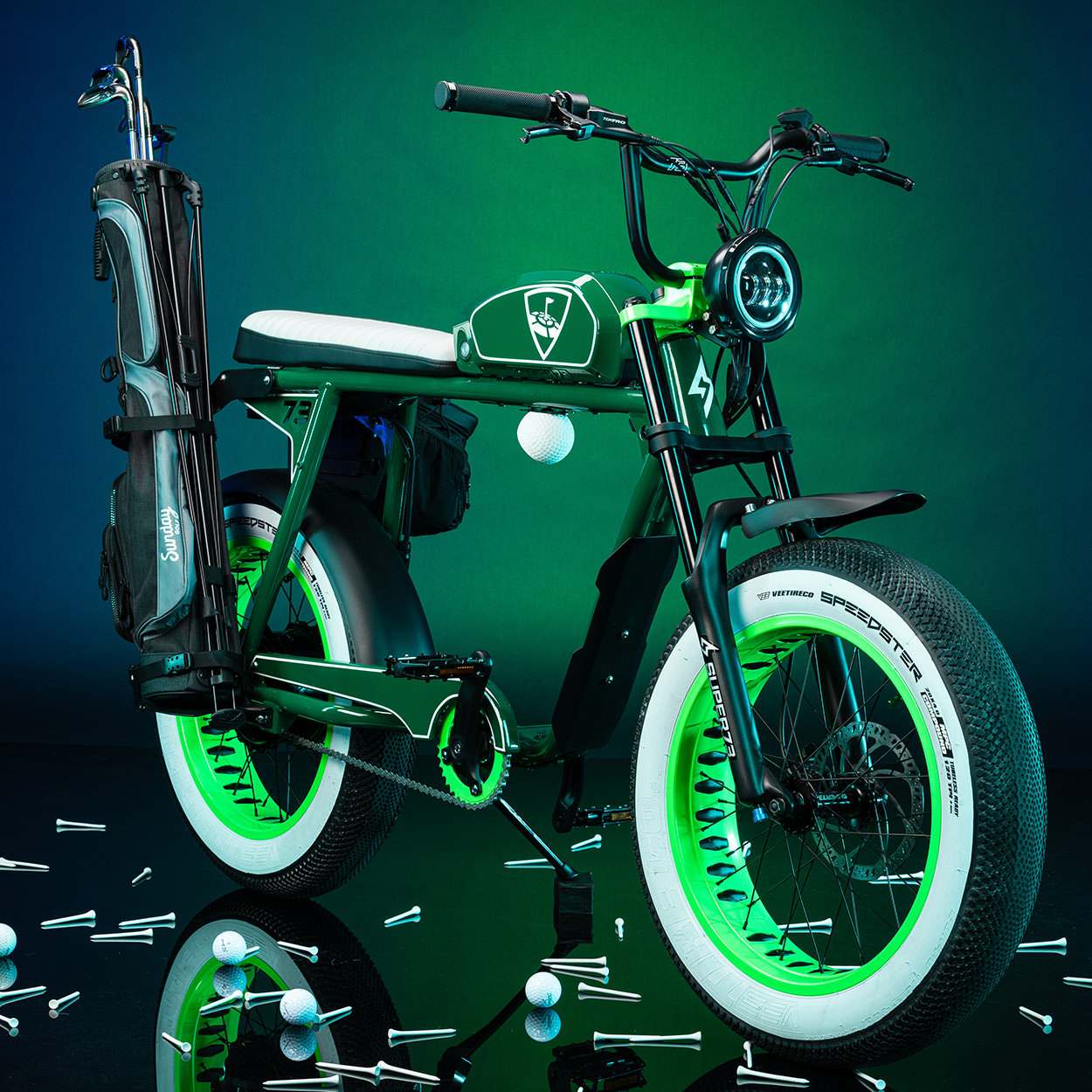 Topgolf Super73 S2 The idea of ​​an electric bike company collaborating with a golf company might sound whacky, but we’re finding it hard not to love Super73’s latest custom. The Californian outfit’s in-house special projects department recently teamed up with the sports entertainment brand Topgolf, to create a zesty golf-themed scoot. 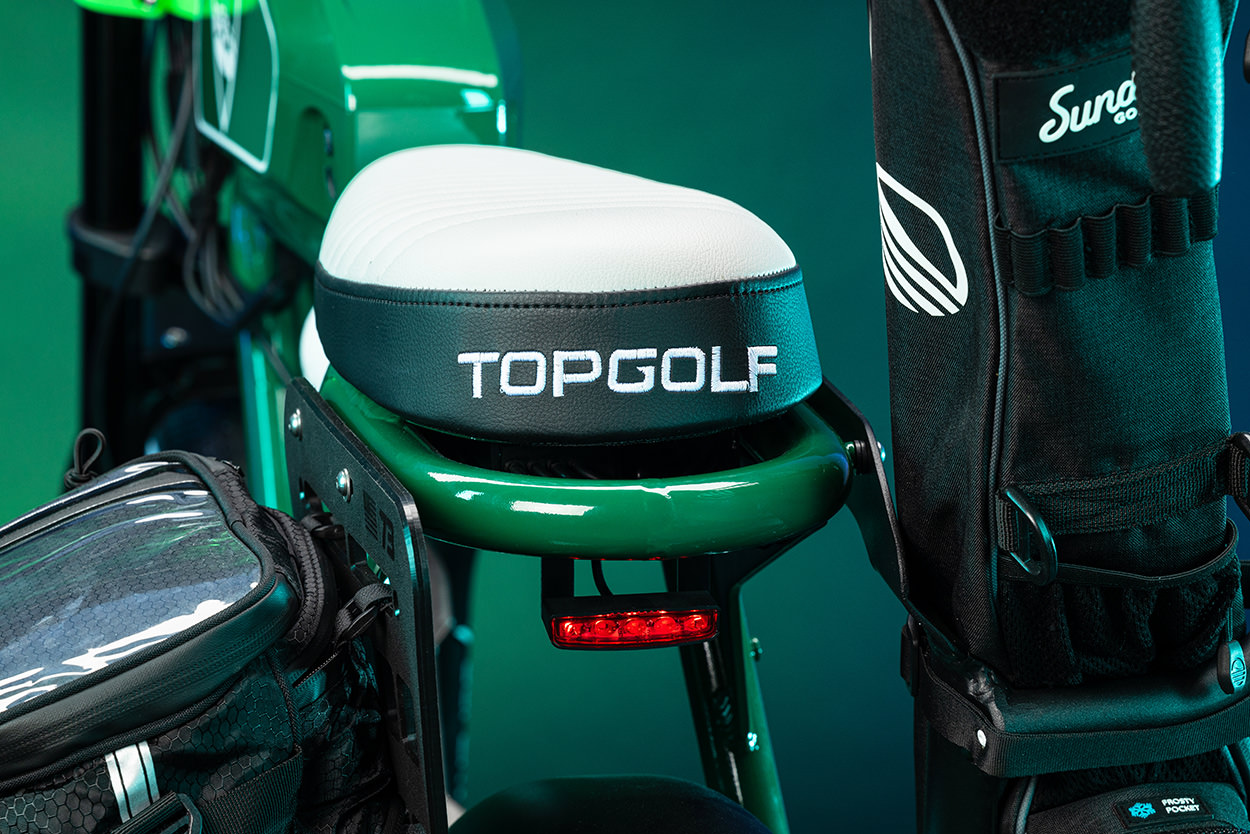 The team’s creative drive came from reimagining the venerable golf cart as a two-wheeled vehicle. Plus they wanted to create a golf ‘cart’ that could quickly and easily transform into a weekday commuter.

Super73 picked their S2 model as a base, then set about adding the necessary accoutrements. On the right side is a golf bag carrier that bolts to the frame, but can be removed in seconds. On the opposite end is a custom webbing panel, used to attach a cooler—which also helps balance out the weight of the golf bag when it’s full of ice cold drinks. 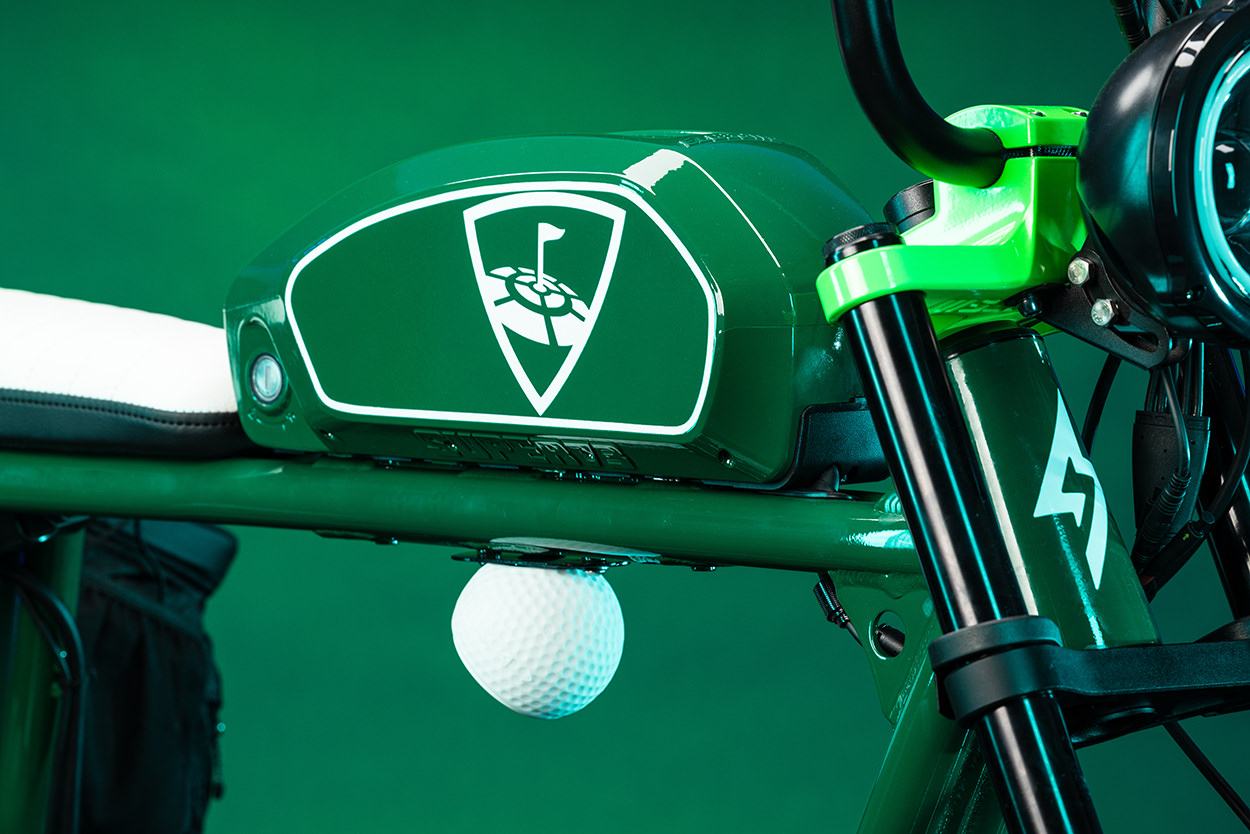 Other additions include a Saddlemen seat, Super73’s own ‘McFly’ handlebars, and a Speaqua Bluetooth speaker that’s shaped like a golf ball. With a set of chunky Vee Speedster whitewall tires, and a livery that mixes two different greens, it sure is eye-catching.

We don’t really go in for golf around here. But if we could putt around the course on this little number, we might just give it a shot. [Super73] 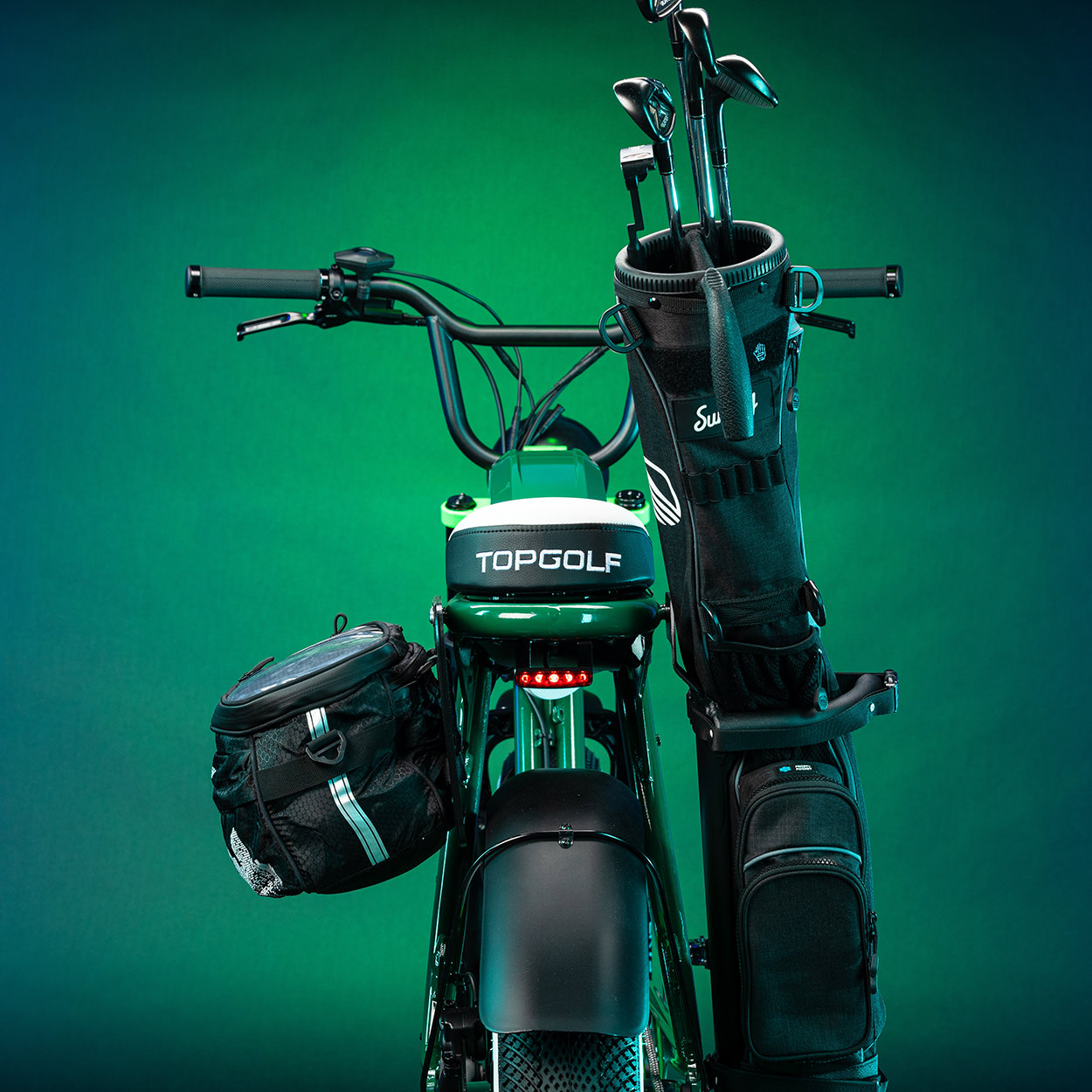