The Spanish masters Tamarit give us a peek at their 101st build, Norton reveal the revamped V4SV, and CCM throw the wraps off the Classic Tracker. Plus news of a most unusual 1924 Harley-Davidson that went under the hammer, and a heavily modified Moto Guzzi from Italy. 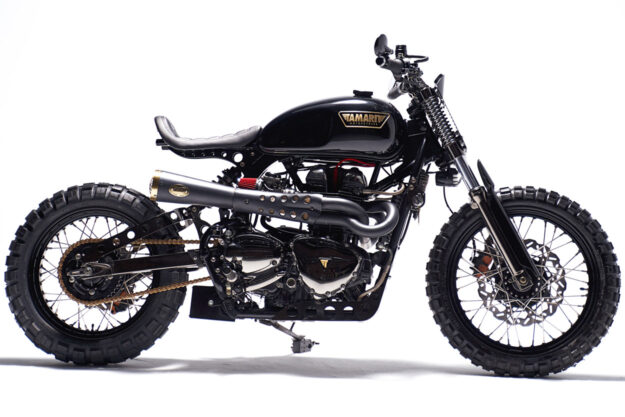 This is Veneno, their 101st build. Starting with an air-cooled Bonneville T100, the Alicante team sunk over 500 hours of work into the bike—including a monoshock conversion and a new swingarm, which is now a homologated part. 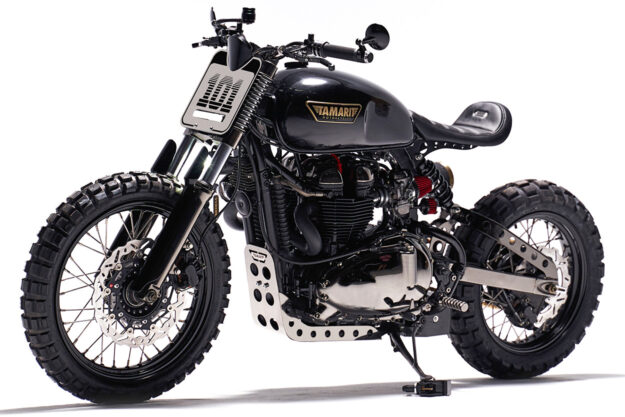 Dirt bike tires lay the foundation, leading us to a flat track inspired front end. The cockpit has been shrunk down to a minimum, using LED lighting and parts from the extensive Motogadget catalog. There is a spring design in between the top and bottom fork clamps—a detail I found very confusing until I noticed that this styling exercise is repeated on the vast majority of Tamarit bikes.

A gold Tamarit logo stands out proudly against the gloss black tank, perched above nickel-plated engine cases. A Zard 2-into-1 scrambler pipe, in black, runs along the right hand side of the bike and terminates right over the new monoshock swing arm. 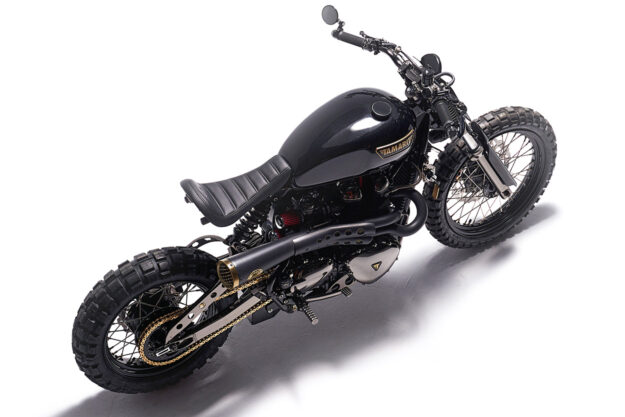 As the focal point of the bike, Tamarit claim this setup increases stability and comfort over the old twin shock setup. (I’ll just gloss over the fact there’s no front fender or fork brace up front.) A single bobber-style seat has been welded onto the frame, adorned with a beautiful leather saddle. Rear lighting is cleverly integrated into the seat base.

Part street tracker, part bobber, part scrambler—Veneno blends these styles to create something new. It doesn’t quite rev me up like other Tamarit builds, but I can’t deny that it is a striking machine. [Tamarit] 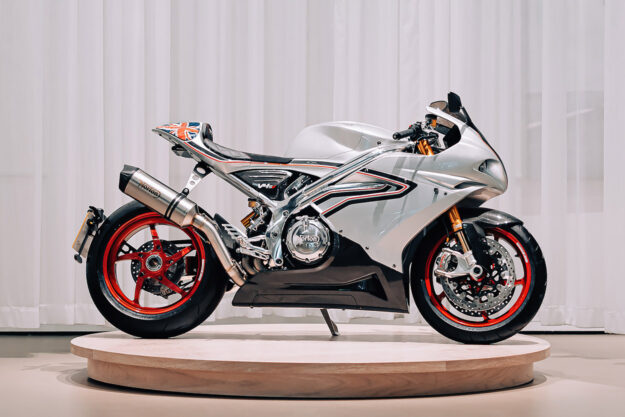 The ‘new’ Norton V4SV Norton hasn’t exactly been in the news of late for reasons, thanks to crimes committed by the jail-dodging Stuart Garner. But the new owners of the historic British brand, TVS Motor Company, are on a mission to change that.

Aiming to bring Norton back from the brink (again), this is the re-engineered V4SV. Originally released over two years ago, TVS took the old bike and have made a multitude of reliability, manufacturing and performance improvements. 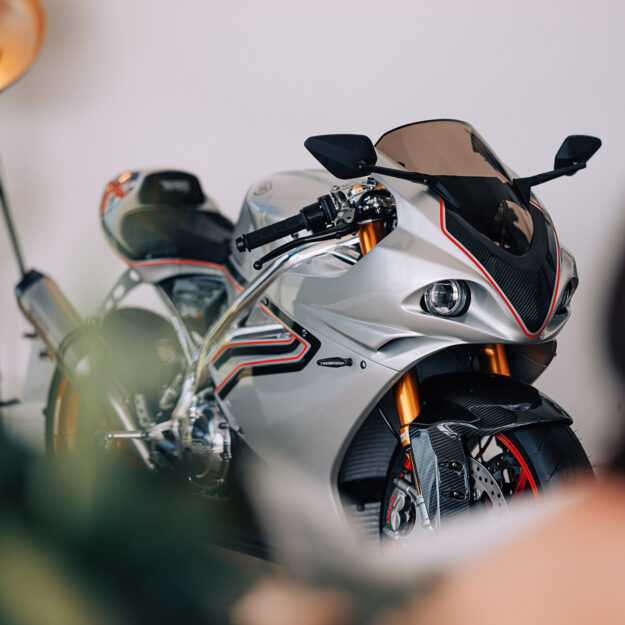 Based out of a brand-new facility in Solihull, the re-engineered V4SV sports a 1200cc, 72-degree V4 engine. Producing 185bhp and 125 Nm of torque, it’s down on power when compared to its 200+hp Italian counterparts but it’s still no slouch.

The chassis and bodywork, however, are top-notch. The aluminum tubular frame is welded and polished by hand and the glorious swingarm is milled from aluminum billet. The bodywork and under-seat fuel tank are carbon fibre, the latter being reinforced with Kevlar. 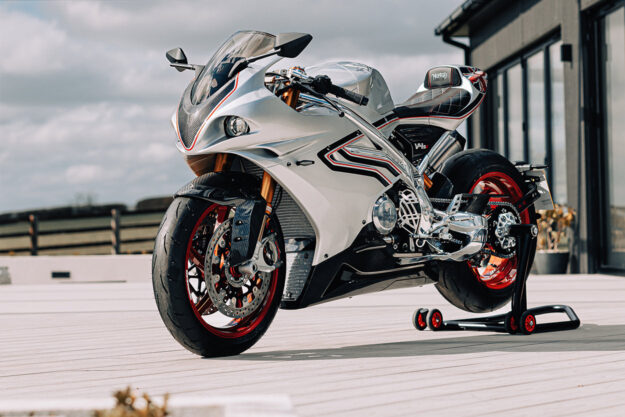 There’s a full suite of Öhlins suspension, and the wheels are either cast OZ Racing items or carbon fiber BST units, depending on your color choice. Speaking of colors, you can choose from Manx Silver or Carbon. I’d choose Manx Silver, one of my favorite Norton color schemes of yore.

TVS are prioritizing the deposits placed before they acquired the company in April 2020, and rightly so. At £44,000 this is an expensive piece of British engineering—almost double the price of a 2022 Ducati Panigale V4S here in Australia. 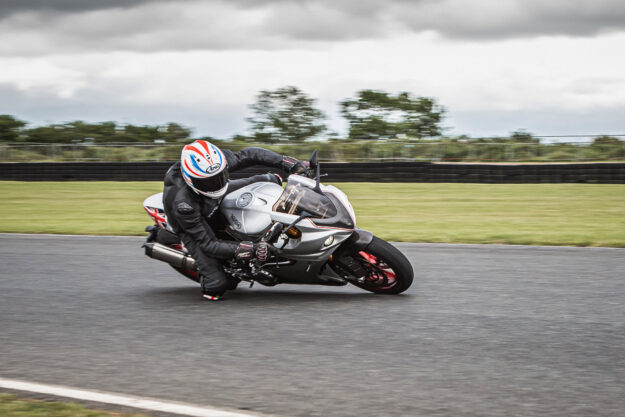 The ex-CEO is a lingering aftertaste that will be hard to get rid of, though. I hope the re-engineered V4SV is the palate cleanser Norton so desperately needs. [More] 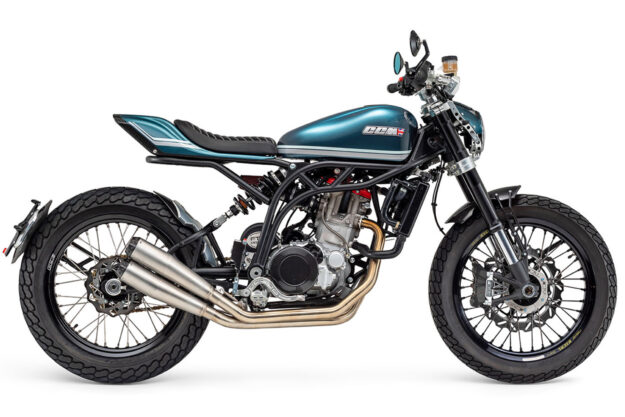 CCM Classic Tracker More than a few Bike EXIF ​​regulars will know CCM, but to the general public outside the UK, it’s one of the more obscure motorcycle marques. Founded in 1971 by Alan Clews, Clews Competition Motorcycles made quite a name for itself in off road racing. 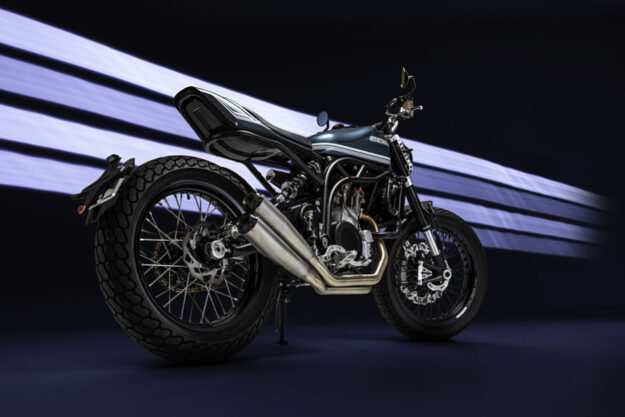 Fast forward to today and we get this: the Classic Tracker. Built around CCM’s success in flat track, it features a hand-welded steel tubular frame draped around the 600cc single-cylinder engine. Other than the frame, engine, wheels and bodywork, there’s not a whole lot to the Classic Tracker and I guess that’s the whole point.

CCM still builds bikes by hand and it shows. From the frame to the machined billet parts, the details on this bike are exquisite. The new twin exhaust with carbon fiber end caps is exclusive to the Classic Tracker line. 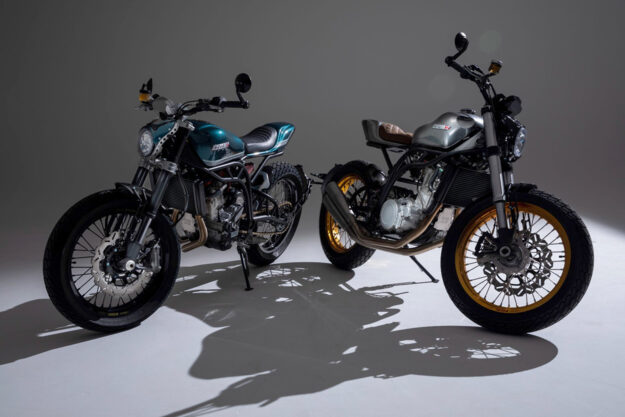 The Classic Tracker is specc’d with Petrol Blue bodywork, black wheels, forks and seat. The upgraded Heritage Chrome’ package comes with Liquid Mercury bodywork, silver forks, a brown leather seat, a Monza fuel cap and gorgeous gold wheels. Petrol Blue does it for me, but I’m also a huge sucker for gold wheels and can’t help but think they would go well together.

Prices start at £10,695 and if you haven’t used the bike configurator on the CCM website yet, I suggest giving it a go. Take off the lights, slap a number plate on the front forks and you’re left with a bona fide flat track machine. [CCM] 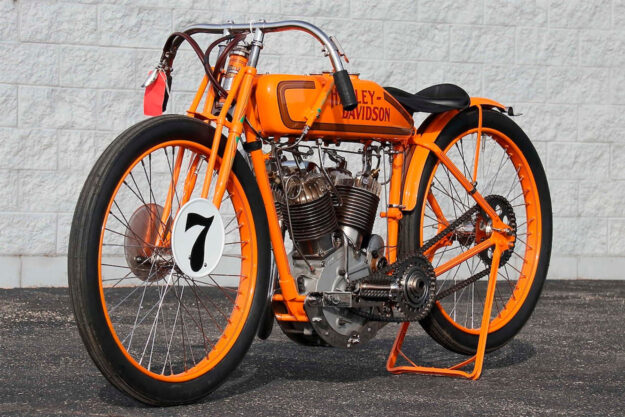 Harley-Davidson JDCA/B For most of its 119-year history, Harley-Davidson has stuck to tried and true methods of motorcycling. But when the MoCo was in its infancy, it was a slightly different story. Starting in 190 for about a decade HD was focused on selling reliable machines to the general population.

Come 1914, when the company was pimply-faced and full of big ambitions, it did what all pre-teens do: started experimenting. 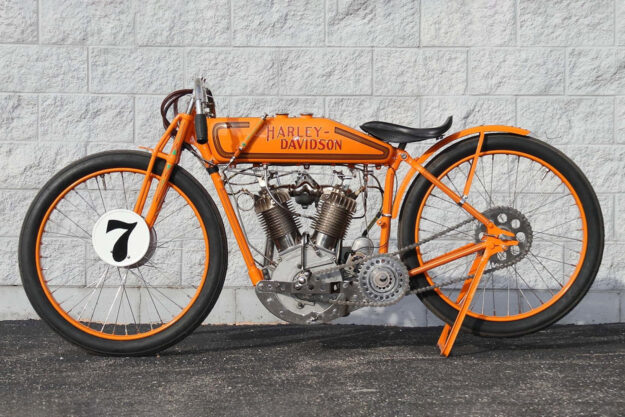 No, I’m not talking about mind-altering chemicals and free love. That would have to wait until the AMF years. I’m talking about racing, and this very orange 1924 JDCA/B is one of those early experiments.

Possibly a one-of-one factory creation, the JDCA/B had a particularly interesting engine design for the time: the spark plug is right next to the exhaust valve, over the combustion chamber. This configuration of the Harley “F-head” engine never went into production, due to reliability concerns, but he did have some success on the track. 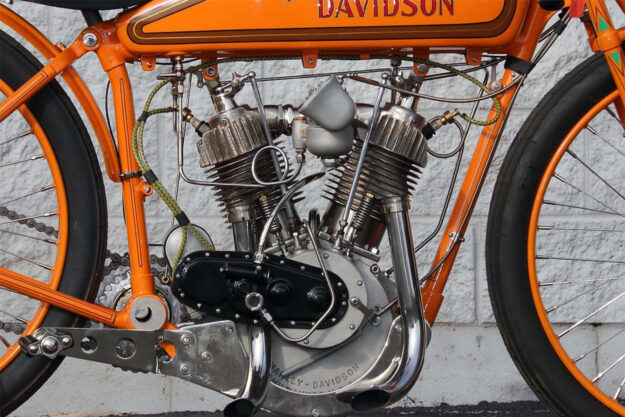 In 1915 at the Maywood Motordrome in Chicago, factory HD racer Otto Walker set an average speed of 89.1 mph for over 100 miles, a new world record. He led for most of the 300-mile race and this is where Harley got the ‘Chicago’ engine name from.

This Chicago-powered JDCA/B has been lovingly restored to its former glory and was recently offered for sale at Mecum Auctions. It’s essentially a bicycle with an engine slung down low, as a stressed member. 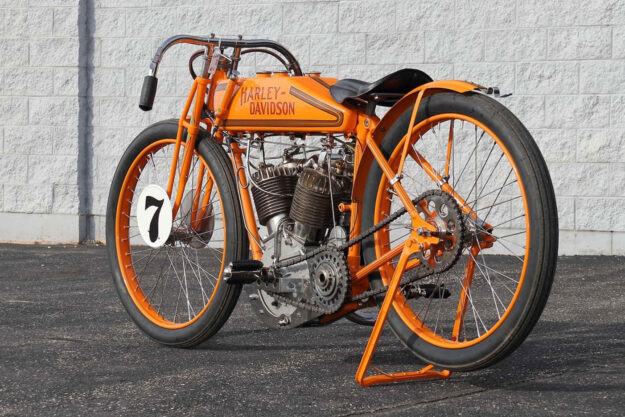 As was common in the day, the bike is also sporting Flying Merkel forks and handlebars and there are no brakes. Yep—you read that correctly. To slow down, the rider had to hit the kill switch and cross their fingers that the engine compression would slow them down from speeds in excess of 100 mph. Give me a long, straight, preferably uphill stretch of road and I’d love to give this thing a go. [Via] 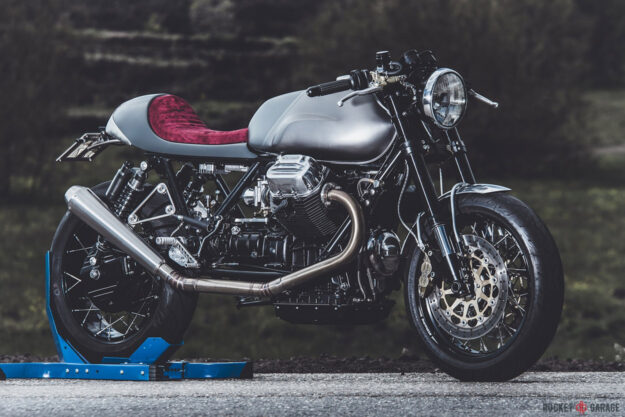 Moto Guzzi cafe racer by Rusty V Dario Di Mauro of Rusty V Motors has a passion for vintage Italian style. And looking at these photos, you can certainly tell. This Moto Guzzi started its life as a California II and as you can see, it’s come a long way from its cruise beginnings.

As far as I can tell, the only thing remaining from the original bike is the frame. Everything else is new. There’s a Marzocchi upside down front end with a 17-inch front wheel and Brembo Gold Series brakes (that may have been donated from a Ducati). 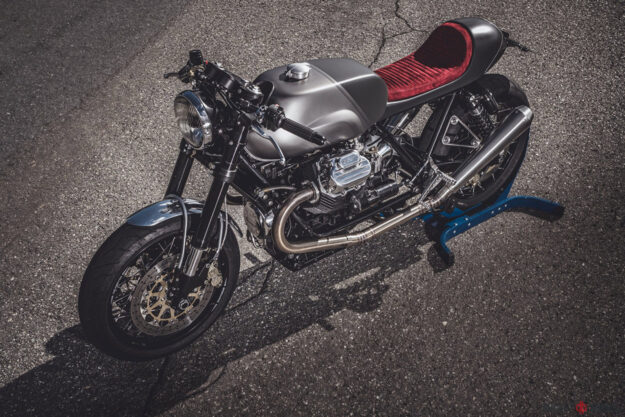 The tank looks like an early Moto Guzzi V7 unit and the seat is also new. Respectively, they have been painted and upholstered beautifully. Actually, everything looks like it’s been treated to a fresh coat of paint, and I’ll bet the electronics have been updated as well.

The engine and gearbox are from a 2003 Moto Guzzi V11 Scura with the internals upgraded and the flywheel lightened. For a hint of vintage flair, Dario is rocking (ha!) early round-barrel rocker covers. 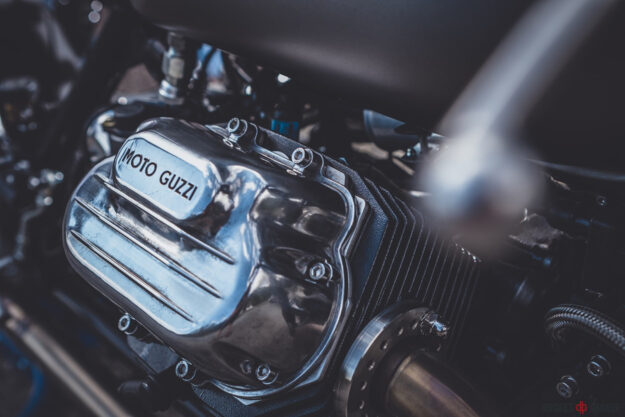 A 160-section rear tire was squeezed onto the back wheel and the stock hub is laced to a new 17-inch cross-spoked rim. The soundtrack is supplied by Mistral, who fabricated a complete exhaust system for the bike.

Dario set out to create a true cafe racer and with the lightened bodywork and performance upgrades, he’s managed it in style. As a Guzzisti myself I am biased, but Dario’s creation gets a solid 11/10 from me. [Via | Images by Andrea Paternò Studio] 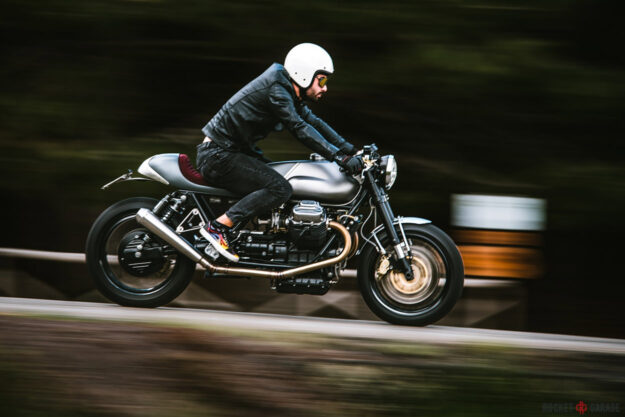