In the wake of so much talk following Francesco Bagnaia’s (Ducati Lenovo Team) crash in Le Mans, the Italian’s stylish return to the top step on home turf no doubt felt pretty sweet as Mugello treated us to another Bagnaia vs Fabio Quartararo (Monster Energy Yamaha MotoGP) showdown.

Starting with Ducati, Barcelona hasn’t seen a Borgo Panigale win since 2018 and the number 63 seems a good candidate to change that looking at his form at similar venues.

Team-mate Jack Miller (Ducati Lenovo Team), meanwhile, will just want more from the weekend in whatever form, with only a single point to his name from Mugello.

Rookie Marco Bezzecchi (Mooney VR46 Racing Team), team-mate Luca Marini and Mugello polesitter Fabio Di Giannantonio (Gresini Racing MotoGP), however, probably want more of the same. ‘Diggia’ impressed for pole and then took a good chunk of points just outside the top ten, and Marini put in one of his best races with some choice moves to take a top six. But Bezzecchi stole a few headlines as the rookie led the race, went toe-to-toe with winners and champions, and still only just faded from the podium. He’s now really leading Rookie of the Year.

At Yamaha, the two sides of the coin continue to trouble the Iwata marque. For his part, Quartararo remains championship leader, keeps taking podiums, and wrung absolutely everything out of his machinery at Mugello to get stuck into a Ducati and Aprilia party in the top six and come out only six tenths off the win. He won in Barcelona in 2020, he had his leathers drama in 2021 but retained some scything speed at the front, and Yamaha are the most successful factory at the track. Can ‘El Diablo’ get back on the top step? And can a venue where the bike has a proven track record help the likes of Franco Morbidelli (Monster Energy Yamaha MotoGP) make a step forward?

Speaking of steps forward also speaks to Aprilia, after another podium at Mugello extended their best ever run with Aleix Espargaro’s fourth podium finish on the trot.

It’s home turf for the Spaniard at the Circuit de Barcelona-Catalunya too – as in, walking distance to where he grew up – and with the form he’s in, it’s hard to imagine Espargaro aiming for anything other than victory. On the other side of the box meanwhile, Maverick Viñales continues to make progress with some searing lap-times near the end of the race in Mugello, with those early laps now the next focus…

For KTM, Catalunya is turf they’ve already conquered, with Miguel Oliveira (Red Bull KTM Factory Racing) on ​​the top step last season. But comparing Mugello 2021 and a podium to a top ten for the Portuguese rider a year on, there remains some margin between the Austrian factory and the podium, and there remains plenty of work going on to cut that down. Brad Binder (Red Bull KTM Factory Racing), however, continues to give it full gas on every given Sunday as the South African put in another race day charge up to seventh after a toughing qualification for both riders. What can KTM do in Barcelona? 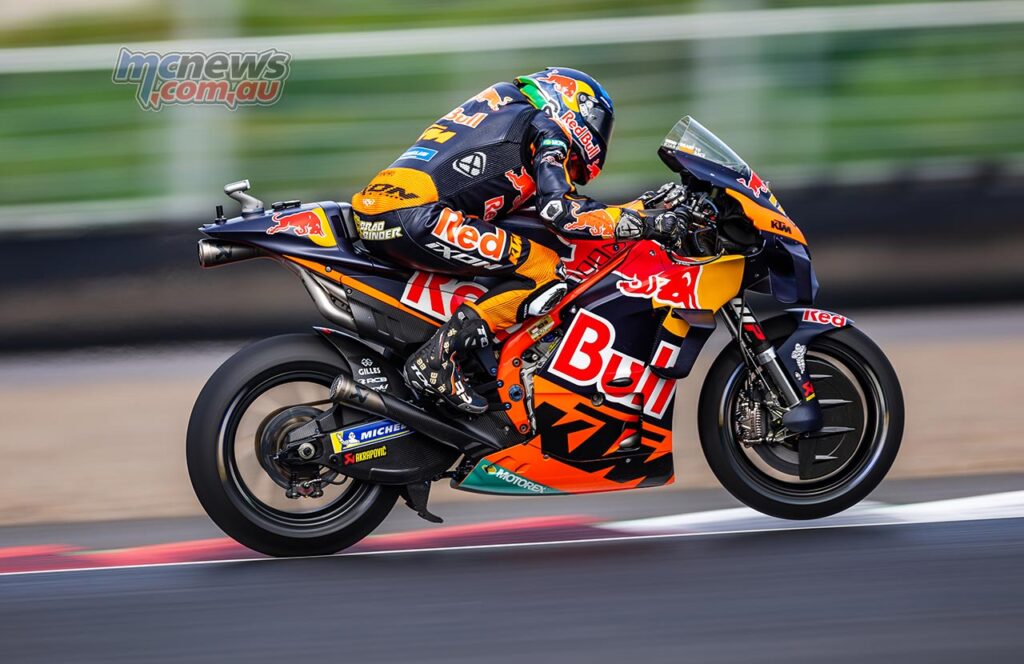 The tougher times also continue for Suzuki. In the last two races neither rider has scored, but Barcelona offers a good track record and another chance to reset for 2020 Champion Joan Mir and team-mate Alex Rins. It also offers a layout that may suit the Hamamatsu factory more, so can put the recent turmoil behind them and come out swinging again? It’s also home turf for both, with plenty of support at the stands.

Finally, at Honda it’s Stefan Bradl back in for Marc Marquez as the number 93 heads for surgery, and the test rider will likely have plenty to use the track time for as the factory continue to feed the RC213V. Pol Espargaro (Repsol Honda Team) looks for some better form too, and on very home turf, and the same can be said for Alex Marquez (LCR Honda Castrol). Takaaki Nakagami (LCR Honda Idemitsu), meanwhile, continues in his step forward… can he keep it rolling and step up in the absence of Marc Marquez…?

In Le Mans, it looked like a done deal. Pedro Acosta (Red Bull KTM Ajo) was off and away in the lead looking like he’d become the youngest ever intermediate class winner, and then came that mistake as the Spaniard hit the floor. But that seemed to have little effect once the paddock arrived in Mugello, with Acosta picking straight up where he left off and bolting away for victory to beat Marquez’ record with more than enough time left on take two. So are the flood gates open?

If they are, there are plenty of fast faces lining up to try and mute the Jaws music. Ai Ogura (Idemitsu Honda Team Asia) is now equal on points with Championship leader Celestino Vietti (Mooney VR46 Racing Team) after a podium for the former and a late technical heartbreak for the latter, Aron Canet (Flexbox HP 40) was on Acosta’s tail before he crashed out, Joe Roberts (Italtrans Racing Team) was back in the mix and the rostrum – and says his recent test in Barcelona was a key factor.

Augusto Fernandez (Red Bull KTM Ajo) had a tough Saturday and then a tough opening to the race before slicing back through from outside the points to a top five, and Tony Arbolino (Elf Marc VDS Racing Team) was quick but overcooked a move on teammate Sam Lowes, earning himself a Long Lap. With a little less drama in Barcelona, ​​what have they got in the locker?

On the back of another GASGAS Aspar 1-2, it’s time for Moto3 to take on Barcelona… and if it ain’t Mugello winner Sergio García who won at the Circuit de Barcelona-Catalunya last year. It’s also home turf for both he and team-mate Izan Guevara (GASGAS Aspar team), they’re now 1-2 in the Championship too. Can they keep it rolling?

Two riders who couldn’t at Mugello were Dennis Foggia (Leopard Racing), who crashed out the lead, and Jaume Masia (Red Bull KTM Ajo), who had an off track excursion and when back on, was relegated to 17th and didn’t t score. Therefore the two remain locked in a dead heat on points just behind the GASGAS duo, so they’ll be looking to bounce back – and so will Deniz Öncü (Red Bull KTM Tech3), who started from pole and then got a tap from Tatsuki Suzuki (Leopard Racing). The Turk fought back to score a point though.

Suzuki then faced a Long Lap and did his own fight back, with the Japanese rider returning to the rostrum for the first time since 2020. Will that kick his campaign into gear? Already a Grand Prix winner but having had a tougher run of late, the signs looked good to expect the number 24 back at the front.

Aussie youngster Joel Kelso has had another week to recover from the injuries he sustained when he was taken out during morning warm-up at Jerez, and will be keen to add to his points tally.