Wayne Maxwell lined up alongside lead championship rival Mike Jones on the grid in Darwin looking to further reduce the YRT man’s championship lead from 22-points. Third placed man on the grid Bryan Staring was also third in the championship chase heading into this first 16-lap encounter of the Hidden Valley weekend. Staring was quick out of the blocks on Friday and looked to have the speed to also be a serious contender for the win.

Josh Waters had only missed the front by a thousandth of a second despite some problems yesterday that saw him lose almost a complete session. The Mildura man by far the most successful rider around the 2.8-kilometre Hidden Valley circuit. Cru Halliday and Troy Herfoss had also showed good pace but those riders on the second row had not shown as much consistent speed as the riders on the front row.

The traditionally fast starting Arthur Sissis headed the third row ahead of Daniel Falzon and Lachlan Epis while Glenn Allerton was on the fourth row alongside Mark Chiodo and Anthony West.

The track temperature was heading towards 55-degrees on the grid.

Josh Waters got a great run off the second row but Bryan Staring got the best launch of the front row to lead the field through turn one for the first time. Maxwell was into second but was passed by Jones early on the opening lap. It looked as though Glenn Allerton almost ran up the rear of Maxwell around the back of the circuit and was running in close company with his team-mate.

As they started lap three it was still Staring, Jones, Maxwell, Waters and Allerton but it was Josh Waters setting the pace, a 65.499 to the Maxima Oils BMW man.

Troy Herfoss was getting quicker as the progressed and was the fastest rider on lap four race before then moving past Arthur Sissis on the next lap to move up to sixth place, 1.8 seconds behind the leaders.

Mike Jones then slipped past Bryan Staring for the race lead after putting in a 65.578 on lap six. Wayne Maxwell passed Bryan Staring into turn one the next time around but Staring cut back under him to push Maxwell back to third again.

The leading trio were almost side by side at the end of the main straight but Jones braked much later and also carried extra speed into turn one and from there he started to break away from his pursuers.

Troy Herfoss passed both Glenn Allerton and Josh Waters around the middle of the race to move up to fourth place. Wayne Maxwell then made a mistake which allowed Herfoss to move up to third place and Maxwell was now being hounded by the two Maxima Oils BMW riders. It looked as though the Boost Mobile Ducati rider must have been experiencing some problems.

Mike Jones had continued to pull away at the front and with five laps to run had two-seconds on Staring. While the rest of the field were now running 66s Troy Herfoss was the only man still in the 65s and was closing in on Staring.

Jones then backed off somewhat which allowed Staring to narrow the gap back down to 1.2-seconds but still had Herfoss chasing him hard. The gap only two-tenths behind Staring and Herfoss with two laps to run…

With two laps to run Jones’ lead had been trimmed to just under a second and Herfoss was within striking distance of second place Staring. Herfoss made his move under Staring late on that penultimate lap to move up to second place and then held it together onto the main straight but a small slide getting back on the gas allowed Staring to get back past him down the straight.

Herfoss back through on Staring at turn six on the final lap and then repeated the same move he did on the previous lap to take second place a few turns from the end, Staring tried to go back under Herfoss at the final turn but brushed Herfoss and had to pull out of the move to save both himself and Herfoss. 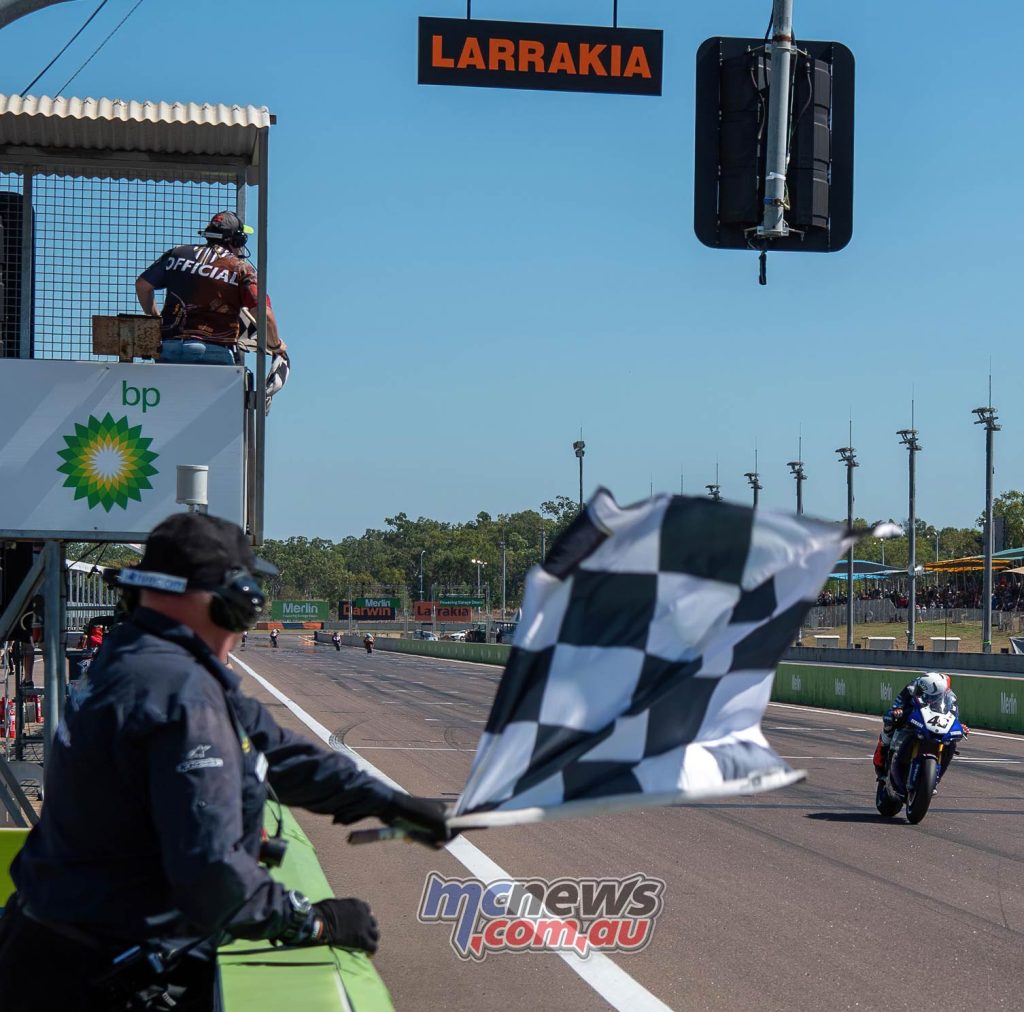 Mike Jones the winner and while the timing showed the gap as 3.2-seconds, it was only that large due to the clash between Staring and Herfoss at the final turn that slowed them both up, they had closed to within a second of Jones thus the win was not quite as clear as the results sheet suggests. That said, Jones had controlled the pace from the front and also might have had more speed up his sleeve to call upon if he needed it.

Wayne Maxwell took fourth place holding to limit the damage but clearly had some sort of issue him back on the Boost Mobile Ducati. Maxwell holds on to second place in the championship but Jones has extended his buffer out to 30-points with that victory. Maxwell was not eager to elaborate on what his problems were and told us, ‘No excuses, just wasn’t good enough‘.

Glenn Allerton will be both encouraged but also somewhat disappointed with fifth place but his Maxima Oils BMW team-mate Josh Waters will be more dejected. Waters looked to perhaps have race winning speed early on and recorded the fastest lap of the race but eventually drifted back to finish eighth, however there are some huge positives for both himself and the team as they look towards tomorrows two 16-lap races. Both their problems stemmed from the hot temperatures. When in the heat of battle around other riders the standard radiators (kit radiators not permitted in ASBK), struggled to keep their engines cool and the ECU reduced their power and with that their potential.

Cru Halliday took sixth place by a couple of bike lengths over Arthur Sissis and to underline how close the field actually was in that contest that pair were only six-seconds behind the race winner, and four-seconds away from the podium after that 16- distance.

Daniel Falzon was ninth and did manage a high 65 in the race but ultimately finished 15-seconds behind the leaders thus will be looking for much more tomorrow.

Lachlan Epis rounded out the top ten ahead of Anthony West and Max Stauffer.

In 2022, Fox Sports Australia will broadcast live nearly every on-track session plus all races.

As has occured in previous years, Channel 7 will broadcast races one and three live-to-air alongside the regular Supercars TV coverage.

Post event, ASBK TV will work with TV production partners AVE to create a special edition replay of ASBK Round 4 – Darwin. This special edition will be broadcast on SBS – Sunday 3rd July 1300 – 1500 AEST.