ASBK 2022 Round Three – Wakefield Park
Alpinestars Friday Round Up #3

Superbike riders wasted absolutely no time getting down to business this afternoon here at Wakefield Park when FP3 got underway just before 1600.

Mike Jones and Bryan Staring putting 57.4s on their first flying lap before seconds later Wayne Maxwell said ‘hold my beer’, and dropped in a 56.776. Wayne then went quicker again with three-minutes remaining in the session, a 56.694 on his 18th and final lap of the session the new benchmark and set just before a red flag put a premature end to the session and saw it declared. He had also put in a 57.026 on his 11th lap to make it three laps in that session faster than any other riders best.

There had also been a lot of improvement amongst most other riders. Herfoss improving to 57.300 on his 14th lap of the session and looking a lot more like we are accustomed to seeing him ride. There was also a couple of 57.5s and 57.6s put in by Herfoss during FP3.

Josh Waters found a few tenths and remained the leading BMW with a 57.595 on his final lap besting team-mate Allerton by a tiny two-thousandths of a second. 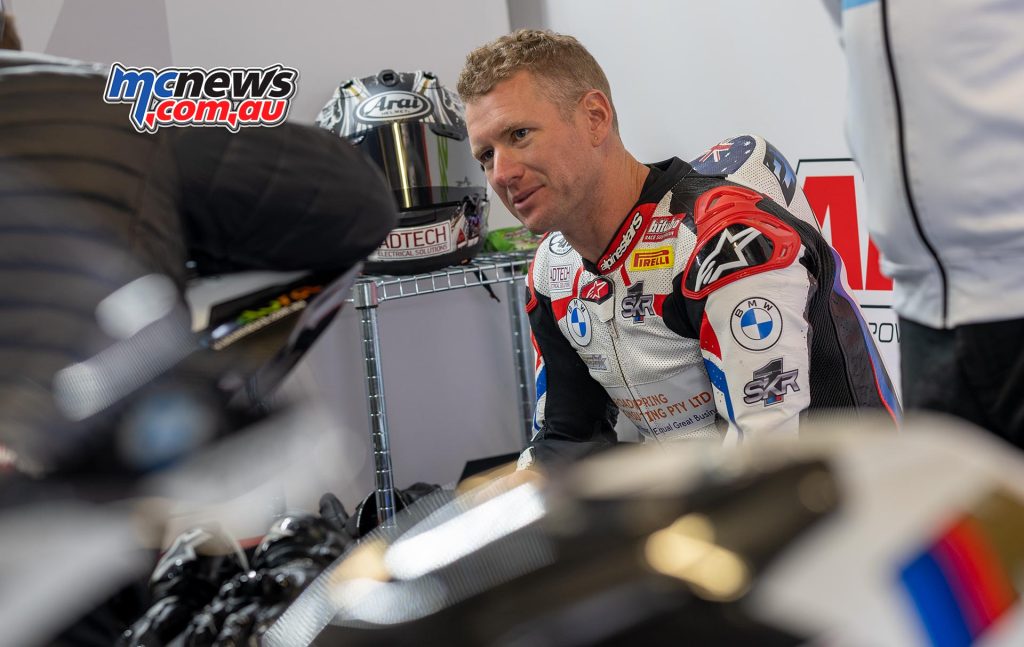 Arthur Sissis almost matched his FP2 time but did not go quicker and it was a similar situation for Lachlan Epis.

Riders further back that really did need to find a lot of speed had done exactly that. The likes of Chiodo, Pearson and Mitcher all dropping around half-a-second. However, Max Stauffer failed to improve on the 58.7 he had set in FP2 and crashed late in the session, the cause of the red flag. Anthony West also failed to improve.

Falzon’s loss of FP2 after he crashed in pit-lane on dropped oil has been costly, with the South Australian way off where he should be by this point of the weekend and in need of making some significant progress here tomorrow to try and secure a decent grid position.

This has been the busiest Friday at an ASBK I can remember. Every Superbike riders seems desperate to put in as many laps as possible at every opportunity. There is the slight possibility of a shower here tomorrow, but it is unlikely. Sunday looks set to be sunny but still cool with temperatures not expected to get above 20-degrees. It could even be as cool as 15-degrees or lower for race one before it gets a bit warmer in the afternoon.

Obviously on today’s form Maxwell looks as though he will be in a race of his own come Sunday. But there are a few riders that are capable of finding the time needed to try and challenge him, if they can get away with him when the lights go out come Sunday… Tomorrow is another day….

Sean Condon celebrated his return to racing after many years away from the sport by topping the time-sheets on Friday aboaerd the Bikebiz Yamaha ahead of John Lytras, Ty Lynch and Tom Bramich. Olly Simpson had a crash today but recovered to P5 ahead of Tom Drane, Dallas Skeer and Scott Nicholson.