So just how much fun can you have on a scooter – off-road? That was the question in my mind at the start of the day on the DT X360 media launch. I mean the reality is that most buyers won’t be going far off the sealed stuff (much the same as most buyers of Landrovers and Jeeps don’t..), but can they actually work on gravel and dirt? The spec’ sheet would suggest otherwise, but specs don’t always tell the whole story.

And when I say spec’ sheet, I’m specifically looking at the fact that its running a 14-inch front rim and 13 inch up the back, 110 mm of front and 108 mm of travel on the back, and finally that it punts out just under 30 horsepower via a CVT box. It’s not exactly a conventional recipe for dirt shenanigans for those of us who spend some time throwing roost around.

And so with that firmly in mind, we set off conveniently from my neck of the woods, Anglesea in Victoria. The weather gods were playing games early on, and so it was a damp Great Ocean Road that greeted us in the morning. ‘Great’. Oh well, gotta sample them in all kinds of weather. Thoroughness and all. Crack on.

Having sampled a decent handful of scooters in the past year and a bit – this one was holding its own and wasn’t showing any surprises or obvious shortcomings to be honest. Decent road manners, nimble feet forward handling, reasonable weather protection including barkbusters that were helping to keep the mits dry in the rain. Everything worked well enough, the 320cc engine was eager without ripping your shoulders off and made for easy twist and go progress.

That long seat does have decent pillion accomodation and has some built in flex at the back that I’d like to think is deliberate for a little extra bump absorption for your pills. And the hand rails for the pillion seem well positioned and solid. So they’re well catered for.

The dash itself is fairly simple and clear – with what can only be described as the world’s largest read-out speed. There is a USB port located in the middle of the bars – I’m not entirely sure how you’d use it in that location as the shape of the bars and plastics might make it interesting to do any type of quad-lock mounting of devices. But I’m sure there’d be a way.

Of course, it should be said that it’s that same twist and go convenience, with no clutch or gears, combined with the ability to swallow two helmets worth why of luggage under the seat explains these scooter jiggers have taken on in other places around the world . Australia’s adoption of scooters has lagged behind Europe by a fair way, but I think we’re starting to catch up. And certainly in terms of the above convenience factors – this ticks those boxes, even if the under seat helmet storage was a little snug for some of the testers’ helmets…

Ride position is suitably upright as you’d expect and the running boards have acres of space for even the biggest of boots. I actually found my preferred riding position had my heels resting on the flat lower footrest and my toes and ball of my foot up on the angled foot-rest. Kinda of a half way in between the two positions. You might be able to see that in some of the pics. Either way it was easy to find a position that suited me and I could have stretched the pins right out if I wanted to.

The throttle has a suuuuper slow twist, so you end up pretty much just smashing it open, but it showed itself to be quite nicely fuelled. Even on wet, slippery roads we were making decent progress. Traction control and ABS were providing to be dialed in nicely too. And while the front brake felt a little underdone for hard stops on the tar, it showed no signs of fading under repeated hard work – and came into its own later in the day.

The engine itself proved to be strong enough, especially so around town and the whole package was fairly swift to around the 80 kmh mark having no gear changes to dull progress. But even at highway speeds it proved itself capable. It’s not sporty. It’s not a rocket ship. But it’s not pretending to be. 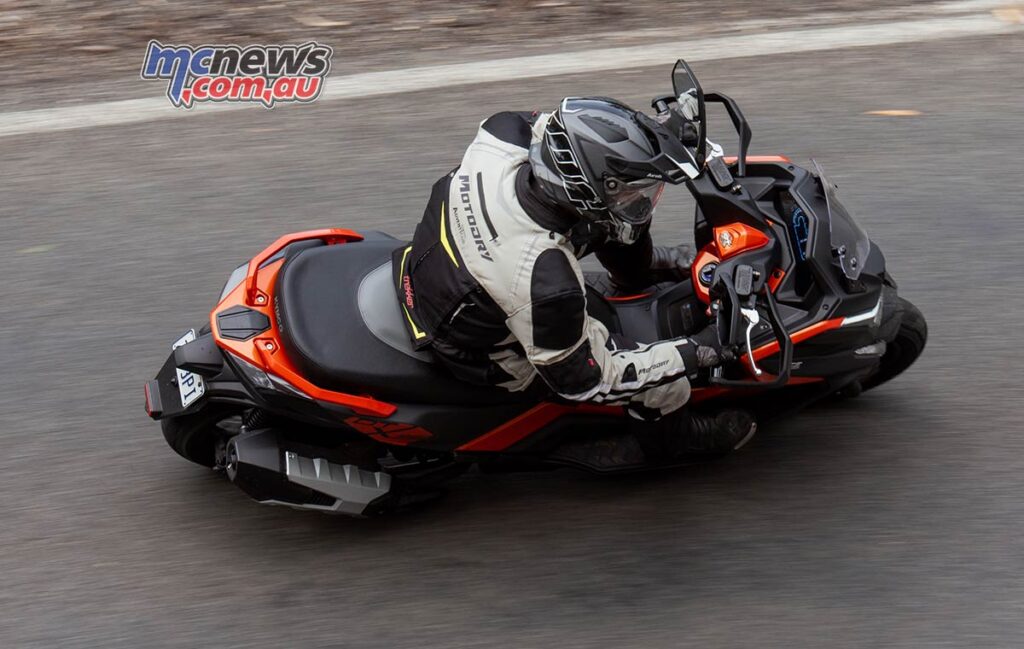 In the wet when the traction was a bit unknown, I found myself riding it more like a dirt bike in the ‘tip the bike over but keep your body upright’ style which seemed to be working pretty well. And then as the roads started to dry out we were able to explore how much grip it had a little further. While the chassis didn’t give a whole lot of feedback, it was predictable and hadn’t shown any signs of letting go at either end despite throwing a fair bit at it. So as the morning wore on, I started to grow in confidence and explore the limits.

It was slightly before lunch that we took a detour down our first wet, slippery, bumpy gravel trail chasing an adventure bike. And that’s where I had my first ‘how is this possible?’ moment. Because it had more grip than those tiny little CST dual purpose tires should have been able to muster and somehow seemed to track pretty damn well – even while sliding it around under full throttle. On top of that, the ABS worked amazingly well even on fairly slippery surfaces. It was frankly mind boggling and hilarious at the same time. So we did that section again. And again.. Just to be sure. Then we stopped and chatted and laughed. And then did it again because, well… skids are ace. 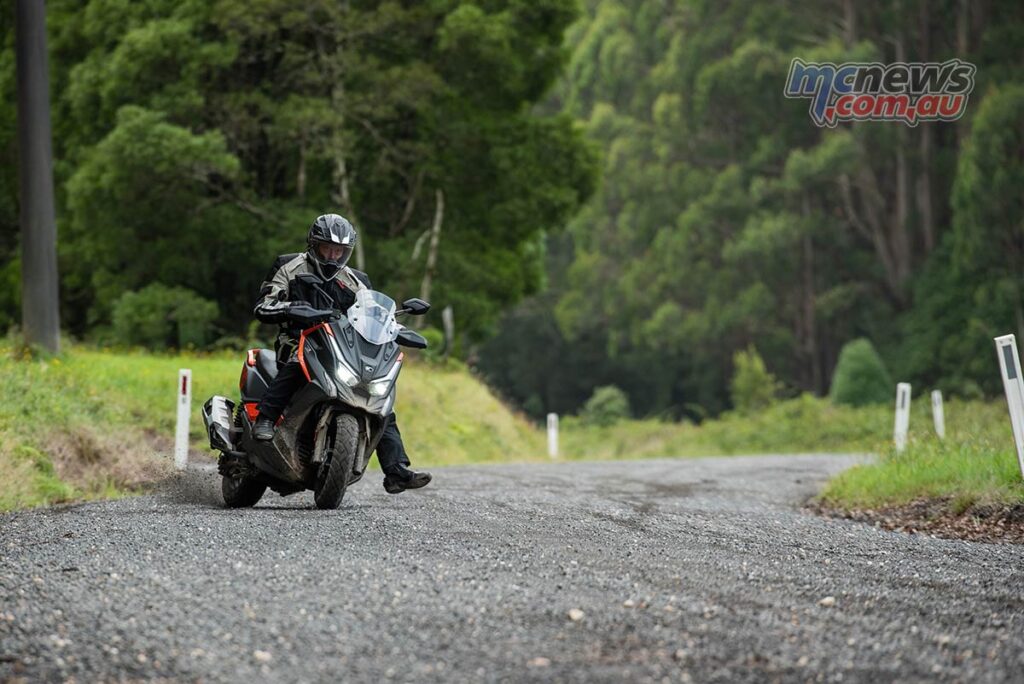 So by the time lunch came around we were pretty much all seeing the orange machine in a new light. Obviously it carries its weight down low which helps. The area under the seat is empty for storage so there’s no weight there at all. Apparently it tips the scales at almost 200 kilos, which at first I simply didn’t believe. I don’t really know where that weight would be. Because it doesn’t feel anything like that heavy when you’re pushing it around. Not even remotely. Feels like maybe 140 kilos?

After lunch had settled, we took off inland from Lorne. Chasing more grins and photo ops. We found them on some nice flowing tarmac heading up into the hills where there may have been some impromptu slipstreaming shenanigans happening and at least one left hander that is a bit tighter than it looks at first… cue scraping of the center stand as we pitched it in at a decent rate. Not a wobble or weave from the tires though. Absolutely planted. Solid as a rock.

Then we found some more gravel tracks and the skids commenced again. And more shaking of heads in bewilderment. The pics and footage should tell you enough. It just shouldn’t be able to do that sport of stuff – but somehow.. does. I found going full send seemed to work best… make of that what you will but when it was kept pinned it did hilarious things. Pressing and holding the traction control while at a standstill turns the TC on the dash green. Which, while counter intuitive for showing that TC was turned off, I took it as meaning ‘green light for skids’. And so that’s what we did. Near lock to lock slides. Splashing through rutts and washouts and puddles. In terms of soft roading, there wasn’t much it couldn’t do. 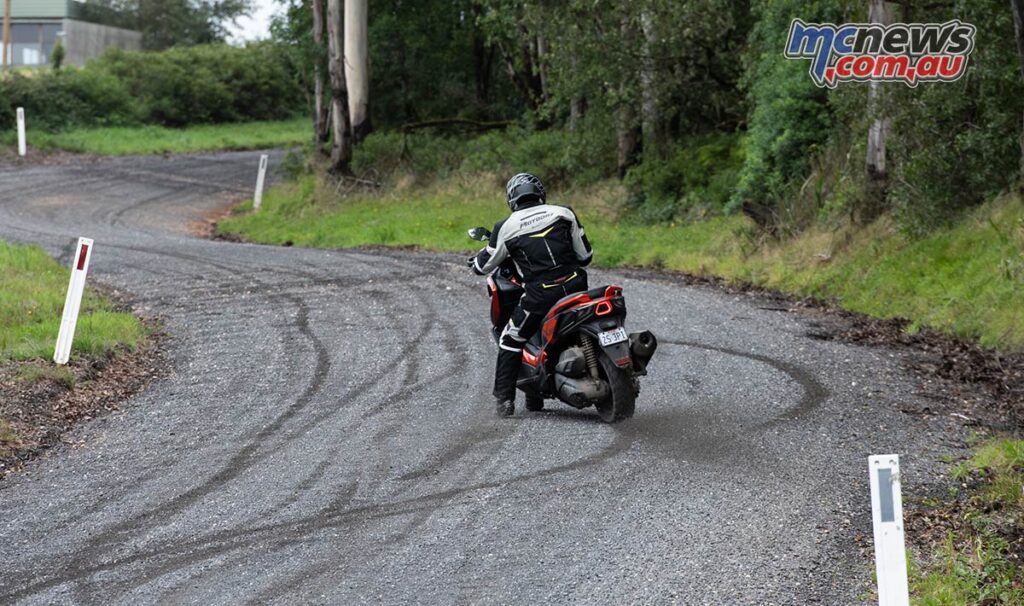 Which I’m still struggling to comprehend, because while the rear suspension has 108 mm of travel on paper, the reality is that it has about 30 mm of movement there when we bounced it up and down. Which is, well, it’s not very much. Yet, it doesn’t bottom harshly. And neither does the front. I honestly don’t know how it handles it, but it sorta does.

Now clearly it’s not a pukka adventure bike. It’s pretty much a regular scooter with dual purpose tires… There isn’t a great deal of ground clearance, so you’re not going to be wanting to tackle rocks or little logs or any of the sort. And we didn’t do any deep sand or mud, which would not be fun with those little wheels. At all. And yet, normal gravel roads proved more fun than I’d have ever imagined. Even on those tires. It really is a surprise packet.

Styling and functionality-wise, it’s actually pretty nicely executed. It comes with a key fob that you can keep in your pocket which I quite like these days. The start up procedure had some quirks with the lower central dial control being used for power on and off, as well as being the lock and unlock for the fuel filler door and seat storage access. But nothing that we didn’t get used to pretty quickly.

Those mirrors aren’t the best though and really mostly show your shoulders – they probably should be located a little further out each side.

Speaking of the fuel filler, there’s a 12.5 litre tank hidden away which given our ‘enthusiastic’ throttle use returned a rate of just over 4 litres per 100 kms, would have to be good for 300 kms of normal riding. Which seems like a lot for a scooter! It’s primed for an adventure!

All in all. A fun little jigger. Waaaaay more fun than I thought it would be.