Peter Hickman has dominated Saturday’s RST Superbike TT on the Isle of Man. The Lincolnshire man finished 39-seconds ahead of Dean Harison with Michael Dunlop the podium 18.2 seconds further back. Hickman devastated the opposition on his Gas Monkey FHO BMW in such a fashion that you couldn’t help but wonder if the others ever really stood a chance. He established a new race record of 1hr 43m 58.564s.

“What a race! The bike was absolutely awesome today and it never missed a beat so a big thanks to the team for all their hard work during the week. For a change, I was quick on the first lap and got into the lead straightaway – not like previous years when I’ve been down the leaderboard a little bit – so once there, I just got my head down. I was able to open up a gap to second and control the lead, short shifting and rolling off the throttle where I could so as to put less stress on the engine. There’s no need to push harder or quicker than you need to so I just settled into a nice rhythm. The bike looks the part, it goes the part and I’m happy to start the week with a win.”

It was also a victory taken on treaded Dunlop rubber with second-placed Dean Harrison also on Dunlops. Concerningly though the delamination issue that struck their slicks at the NW200 did rear its head again during the Superbike TT, with the treaded rear of Davey Todd delaminating.

Todd’s team-mate, Conor Cummins also retired on the mountain when challenging for a podium but whether or not Cummins problem was also tire related has not been confirmed. The SBK TT saw many fancied runners drop out, with Lee Johnston, Gary Johnson and many others failing to complete the six laps.

The race played out in glorious conditions with fans perched at every available vantage point. The island is absolutely packed to capacity. On the eve of the race there were still punters frantically searching for the last minute accommodation on social media platforms. Today, the increased attendance was more than noticeable as droves of spectators flooded into position in the lead up to the race. Trackside, it was electric.

John McGuinness carried the number 1 plate for his 100th TT start and was first away. However, there was almost a calamity seconds later when a soccer ball bounced onto the road right at the top of the frighteningly steep Bray Hill. Fan’s spectating in the adjacent walled gardens excitedly waved and whistled in the hope of alerting someone who could stop McPint before he reached the scene.

However, being so close to the start (about half a KM) they had no chance. Thankfully Honda racing’s main man missed the ball on the way through; it’s unclear at this stage if he knew anything about it. The ball continued to bobble about the track until third man away, Michael Rutter came through. It was then plucked from the road and thankfully put somewhere safe. Heart in mouth stuff right from the offset.

In the early stages before his tire woes, Davey Todd showed great promise and looked like he was going to the challenge for the win. At the first split he was neck and neck with Harrison, just 6s down on Hickman. But Todd would retire on the 2nd lap at Sulby with tire issues. 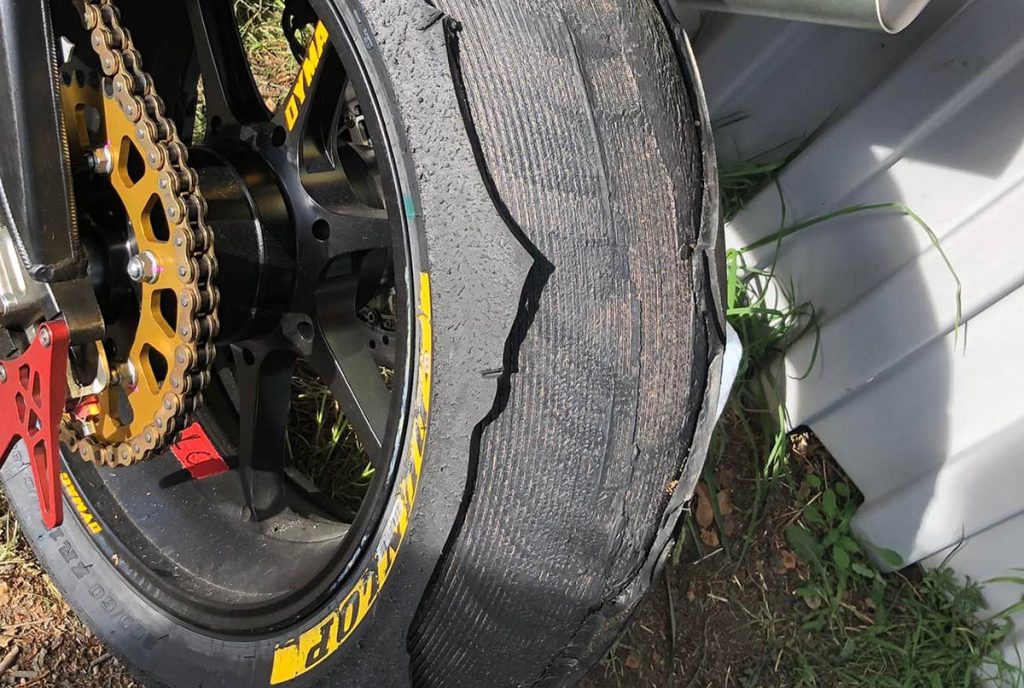 Team boss Clive Padgett phoned the Sulby Glen Hotel (where the live feed had shown Todd now was) to make enquiries about his rider’s well being before lamenting the tire issues on air.

A familiar story then developed when Englishmen; Hickman and Harrison, began disputing the lead. However, Hickman seemed to have all the answers each time Harrison asked him a difficult question. He set the fastest lap of the race (133.461 mph) on lap 2 and after the first pit stop the gap grew to 16.8s. Hickman would indicate post-race that establishing that buffer was key to sealing the win. ‘It starts to feel a little bit easier’ (once you have that gap) he said. From then on, he seemed to have it his own way.

As Hickman moved out of reach, the interest turned to the race for second. Todd and Cummins were out and Hickman (no.10) had caught Dunlop (no.6) on the road. Dunlop was able to latch onto the race leader and match his pace. This dragged the Hawk Suzuki rider closer to Harrison who was going it alone as the leader on the road (he had started no. 2 and had caught McGuinness early on). Dunlop was able to take advantage of Hickman’s superior speed until the 2nd round of pit stops when the pair were separated. At that point Michael stopped making in-roads on the runner-up spot and at that stage it seemed that the top 3 were locked in.

During the post-race Monster energy stage interviews, Harrison complained that he was having serious brake issues and that he had to continuously pump them as he raced or they would not be there when he needed them.

Michael Dunlop conceded that he was simply struggling to find that last little bit needed to match the faster men.

While the final couple of laps were all about bringing it home for the podium men, an interesting fight was brewing behind them. Ian Hutchinson and John McGuinness were fiercely disputing 4th in a struggle that went to the wire. Hutchinson eventually got it by nine-seconds but it was a solid showing from both men, and each will surely be satisfied with their day’s work.

“I’m so happy with the result today. To be back here on the Fireblade and with this team has been like coming home, I’m so grateful to Harv (Havier Beltran – team manager) for bringing me back into the team. And at the end of the day it’s my 100th start, it’s been a wonderful day celebrating that with my family, the team and the fans. I’ve never seen so many on the course, and they’re all waving. It’s been special.

“It’s also been serious. I’m on a Superbike and there’s no getting away from it, they’re hard to ride, seriously powerful things. Before the start we figured to bring it home in the top six would be a realistic result, so it’s good to do that, although I can’t deny I feel I let the team down a bit. There again I know my limits, you have to bring it home. Also, I have to doff my cap to my teammate, Glenn. That was an incredible result, and to lap at nearly 130mph in your first race, he’s a special talent!”

Jamie Coward was a surprising 6th ahead of a fairly disappointing James Hillier in 7th.

“The changes we made both before and after the qualifying session on Friday evening were a definite step in the right direction and although I had a slight issue with the bike when the fuel load lightened, I soon sussed it out and was able to press on . Conditions were perfect and after a steady first lap, I built my way into the race and the more I relaxed, the more the lap times came. It was quite a lonely race, I think I only saw Lee Johnston and Michael Rutter over the entire six laps and it’s a shame I missed out on fifth by such a small margin but I’m more than happy with sixth in the Superbike race. A huge thanks to the team as they’ve worked their socks off all week and late into the night so the hard work paid off and it’s nice to get race week off to a good start.”

There was great excitement surrounding Glenn Irwin’s 8th place finish. Irwin outstandingly lapped at 129.85, becoming the fastest ever newcomer in the process (a title Hickman has held since 2014). Irwin has been doing some serious homework over the past few years and it’s been said more than once that his preparation has been meticulous. Weather permitting, Irwin should surely break into the 130 club by the end of the week. His talent is undeniable and if his progress continues on this trajectory then Hickman et al will have another serious rival to contend with in the not-too-distant future.

“That was an amazing day. Before the start I felt a lot of nerves, I was quite emotional! I’ve never felt like that before. But once I got going I felt really good. I think I probably respected the bike too much when it was on new tires and full fuel load on laps one, three and five – but I think it’s important to do that.

“After the second pit stop I could see that the gap to James Hillier had grown too much so I concentrated on hitting my marks, although I was also watching the crowds, there were so many on the course, waving – I really wanted to wave back!

“I’m thrilled to get that newcomers’ lap record. In my head it was always a possibility, but I didn’t expect to achieve it so soon. I didn’t expect the laps to fly by so quick, too. I remember starting lap two, thinking no way was I here already. It was all really enjoyable, and hats off to Hicky, Dean and Michael. The guys here are on another level.

“I’m really proud of my teammate as well. We had a good chat before the race and another afterwards. Not only was that his 100th TT but he proved he’s still so fast, and consistent. That was an impressive result. I also want to thank the team, they’ve been brilliant. And special thanks to Harv, he’s brought Honda Racing UK back to this level. I know there’s been a lot of effort, a lot of pressure on him in achieving what we have in BSB and now here, so he gets a huge pat on the back from me for what we as a team together have achieved.”

The party atmosphere induced by the fantastic SBK action was short lived. The following Sidecar race was redflagged soon after it commenced. Only a handful of outfits got a chance to start the race before the stop. It was later confirmed that experienced 35-year-old French competitor Olivier Lavorel, 35, had died in an accident that occurred at Ago’s Leap, just under 1 mile into the Course, on the opening lap of the race.