I thought the bike was going to be finished up after the paint work. I did back in October. Got that all done and installed on the bike, emailed my friend who has expressed interest in buying it only to start it and discover a short circuit causing the main fuse to blow.At this point I just put it down and did other stuff.My friend told me more than once he was in no great hurry so on the back burner it went. 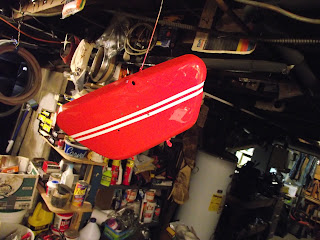 Now here we are at the end of winter. The world is falling apart with insane war and other garbage that get me all depressed.I decided I’d get into a project rather than sit in front of this computer all day long reading the propaganda about the bogus war Russia had started with it’s neighbor Ukraine . It’s depressing so out to the garage I went yesterday determined to find the electrical short and fix it.Armed with my new vintage analog volt ohm meter I went at it. . 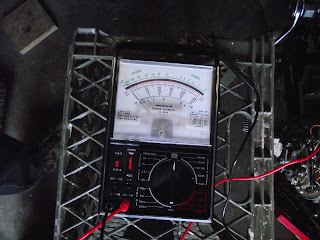 I thought it was in the charging system because the bike did start but as soon as I reved the engine off idle the main fuse would blow so I began with the voltage regulator.Took it off the bike and tested it for shorts. It seemed good so I dug out a couple more from my parts inventory and checked them.They all came up with the same readings so back in it went. 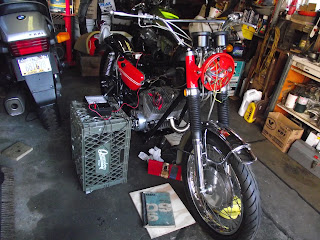 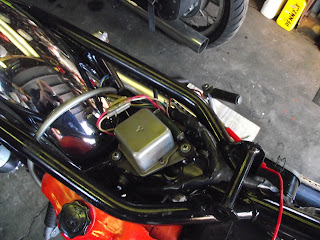 The next thing I checked out was the ignition Yoke.It is the generator and also the location of the ignition points and condensers .Lots of connections are also here and it’s a likely cause of my troubles I am thinking at this point. So , off it came and after testing it for ground faults I dug out a few more I have to compare. Again like with the regulator it came up good so back on the motor it went. 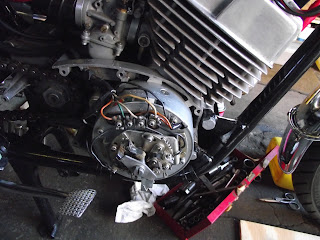 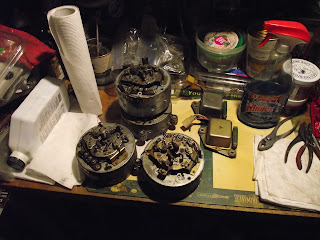 So now I went into the headlight bucket .This is the place where all the wires connect , you know, sort of like the brain of the machine. Got out my old service manual and looked over the wiring diagram . Grounded the meter and started poking around into all the connections. 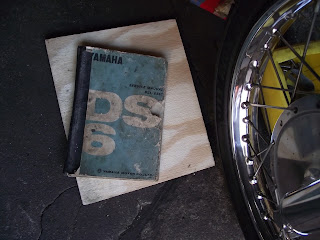 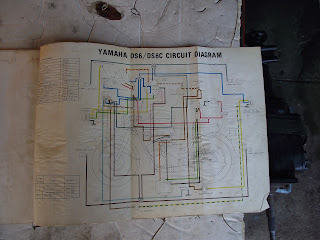 Tried it with the ignition switch off first and everything looked good put the switch in the on position and I found a wire coming from the handle bar switch that was grounding to the frame while not plugged in to the rest of the harness. Found it ! So I took the switch off the bike and repaired the broken wire.A soldered connection had failed and when the engine ran the vibrations it made caused the wire to move around and short to the metal switch housing. It was a pain in the ass job to fix.Had to take the whole switch apart .In the old days when one could go to a dealer and buy a new switch this would have been so simple but this is working on vintage bikes and I kind of love the challenge . So, today I put the bike back together and the next nice day that we get I’ll road test her like I had planned to do way back in October. I built this bike way back in the mid 1990’s after I restored my original DS6C .My original one was orange but when I did the restoration I was only able to get green parts that were new genuine Yamaha (NOS).I wanted all excellent used or new (NOS) parts so the bike would be in factory original condition rather than re painted and re chromed . My original DS6C had a long life with me and still serves me well. I built this orange one just because I wanted both colors that they were sold in .With age comes change and I no longer need what I had to have 30 years ago so it gets sold off to a friend who will surely enjoy it and take care of it.Here is the story of my original (Green) DS6C. I bought this bike in 1972 from my brother in law’s brother who bought it new.It had around a thousand miles on it and cost me 300 bucks.Looking at the old service manual that came with it brought all these memories back. It’s hard to wrap my mind around the fact that I’ve been riding this bike for 50 years! 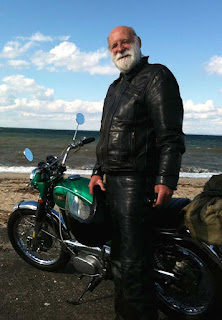 Back in the early 90’s my DS6C was looking more like a ds6.It
had red body work and low pipes.The only thing DS6C was the
frame.It wasn’t always this way,and I wanted to bring it back to
the bike it used to be. 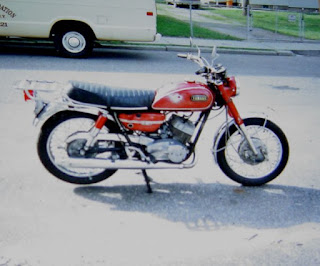 What happened is that it got
stolen, destroyed, and recovered back in the early 80’s.It sat for a
While, I fooled around with this 650 Thiumph that was nothing but problems and sold it . Found myself bikeless.That lasted for about
3 days.I looked around and found this 70 DS6 with no papers.
Back then no papers was a real problem so I got the bike
cheap.I had the paper on my DS6C so I took the new one apart
and set it up on my DS6C frame.It was ugly but it was a good
runner.I drove it like that for 10 years.It was my only bike!I looked
and looked but could never find a DS6C . 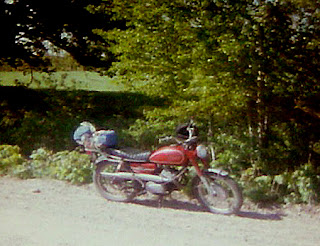 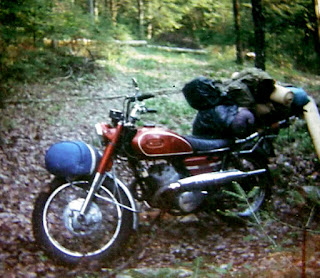 I started to restore the
blue YM1 and started sending out wanted pictures of a DS6C in
all my letters and parts orders.One day I received a call and
some guy in Pa. told me about this Harley Dealer in NJ. who had
about 100 old Yamahas in a storage building.It turned out the
dealership was originally a Yamaha dealership and these were
all just left behind by the previous owner.I called and made an
appointment for the next day and when I got there I couldn’t
believe my eyes.There were about 150 Yamahas from the 60’s
just sitting there and a parts room full of NOS parts! I found my
DS6C and another one for parts.The good one was left there in
1969 over an unpaid repair bill!! It had 1400mi on it, a dented
tank, smashed instruments and a dented rear fender, the rest of
the bike was like new.I got the pair for 300 dollars. 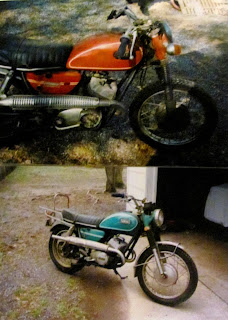 After we did
the deal I asked if I could look around the parts room some.The
owner said sure go ahead so I did. I found a YDS3 front fender
and all sorts of bits and pieces for my M1.I also found a front
brake for the TD1B that my friend Don Scarborough was
building. This place was a gold mine. 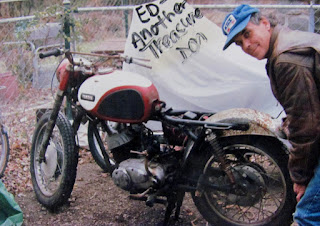 Over the next year I told all
my friends about it and we cleaned him out.The one thing he
didn’t have a green DS6C gas tank.That was the only part I
needed to get back my DS6C.I looked and looked and one day I
found one in NC. at Wilson Cycle Center.This place turned out to
be another gold mine.The owner was a real gentleman. He used
to send me my parts with a bill and give me 30 days to pay!So I
order the tank and I wait and wait,no tank. I call, he says he sent it
UPS so I track it. It turns out he sent it to my friend Don in
Michigan. I finally get the tank and a fully restored DS6C with
1400 miles on it.Like the YDS3 I use it all the time and it looks
and runs as good as the day I finished it.I’ve owned this bike
since 1972. I rode it to Newfoundland, all over the Adirondacks,
and Main&Nova Scotia.

My original DS6C on the trip to Newfoundland. Unfortunately these are the only 3 photos I have of the original bike from back in the days when I first got it. 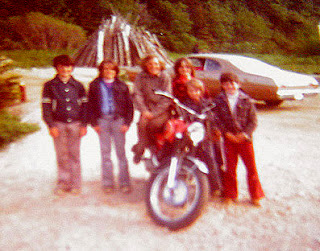 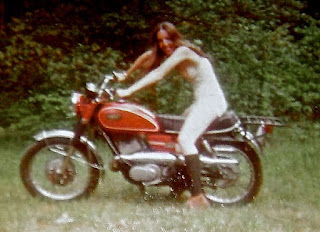 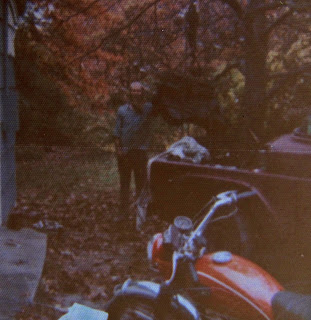 It’s probably the best motorcycle I have
ever owned next to my R5 ,but that’s a whole other story and then there’s the Moto Guzzi. In the winter of 2014 I finally got to finish a reproduction of this great bike in it’s original orange color. I started building this back in the mid 90’s and then just put it away.This photo is what the green bike and all it’s variations over the years looked like when I bought it in 1972. 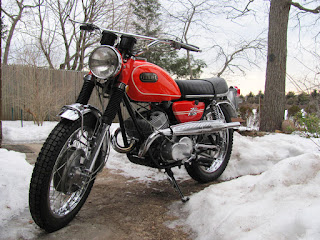 I wanted to have one that looked the same in every detail in the 90’s but today I just don’t give a shit.It’s for sale to raise money for the down payment on a house in the desert where I will be riding my original ” old faithful ” green 1969 Yamaha DS6C until the day I draw my last breath. :

So , now the heat is on out in the garage.It was 18 degrees F out this morning so it’s taking some time for the old kerosene heater to warm my work shop. If all goes well today I’ll be sending an email to my friend telling him the bike is ready if he still wants it, if not it goes on Craigslist.Time to get started on the next bike that I’m going to build to sell and all the other unfinished projects I have hanging over my head.