The Pirelli MX2 Lite category for the 250cc machines is turning into a one-horse race for the title. World-class rider, Wilson Todd (Team HRC Honda Racing) has taken a stranglehold on the category, after he took another double in the class in absolutely emphatic style to make it three perfect scores from the first four rounds.

Todd has only dropped one race, and that was in the first moto, at the last round at Wodonga, where he had his only glitch for the year; he crashed out of the lead but recovered from 12th place to charge back through to finish fourth.

As per usual, Todd was the fastest qualifier so before the gates dropped there was plenty of head scratching on how to stop his march at Gillman. Todd is a high-class competitor and If the world was true, Todd would again be on the world stage. Arguably, the only reason he is back in Australia is because he couldn’t secure a ride in World MX1 after ageing out in the MX2 category, and with the covid hangover and the uncertainty that sows, he missed out on continuing overseas.

Todd had a 35-point lead over Bailey Malkiewicz (Serco Yamaha) who, at Wodonga took that victory, was second in the chase and confident of carrying that form to Gillman. Like Todd, the ex-junior World champion is also back in Australia from Europe, after a ruptured right knee overshadowed his 2021 season.

While Todd was the pace-setter in qualifying, Malkiewicz had a fall and thus was eighth in the gate pick. Noah Ferguson and Rhys Budd filling out the top three.

The MX2 class was the first race of the day and with recent rain the track was till bedding in, that was amply demonstrated by the difficulty some riders had in finding lines and a rhythm.

From the gate drop in Moto 1, Japanese rider Haruki Yokoyama (Empire Kawasaki) stormed to the holeshot but was soon overtaken by Todd, who set about settling into a race winning rhythm.

Haruki-san was riding the best he has all year and was in second for two laps. At the very end of the same lap, Malkiewicz crashed at the final turn and it was soon apparent he was in deep pain as he clutched his left knee.

The race continued as Bailey was attended to, but in the process Yokoyama was pinged for an indiscretion under the yellow flag and was given a two-place penalty at the race’s end. Nonetheless Todd was already heading to the next postcode as he had a six-second lead after a few laps, while the Empire Kawasaki rider came under attack from Larwood and Budd.

Larwood was soon in second spot with team-mate Budd keeping him honest for the majority of the 25min+1lap moto, as Todd disappeared in the distance.

Behind the front three, there was a thoroughly entertaining freight train. Liam Andrews (RedRide Honda) had a great tussle for the majority of the race as a few other riders put in great efforts.

Last year’s MX3 victor Blake Fox (GasGas) found some much wanted form and consistency to get up to fifth at once stage, within a bunch in the fight for second through to eighth that included Ryder Kingsford (WBR Yamaha), Andrews, Dylan Wills ( Husky Australia) Noah Ferguson (GasGas) and Yokoyama.

Todd is a class act and negotiated the tricky conditions clinically in his execution, negotiating the changing ruts with aplomb and went on to win the first moto by 15-seconds from Larwood and his team mate, Budd a further 19-seconds adrift.

Yokoyama crossed the line in fourth for his best finish of his campaign. Next across the line was Andrews, Kingsford, Wills and Ferguson line astern, but with Yokoyama dropped to the sixth after penalties were applied, allowing Andrews to inherit fourth place. His best result of the year so far.

The surprise at the start gate was the appearance of Malkiewicz as he looked like he would be off track for some time after his crash in the opening bout.

Yokoyama claimed another hole-shot as Todd showed he was human by having a little whoopsie to drop down the field, before starting his charge back through to sixth after the opening lap. 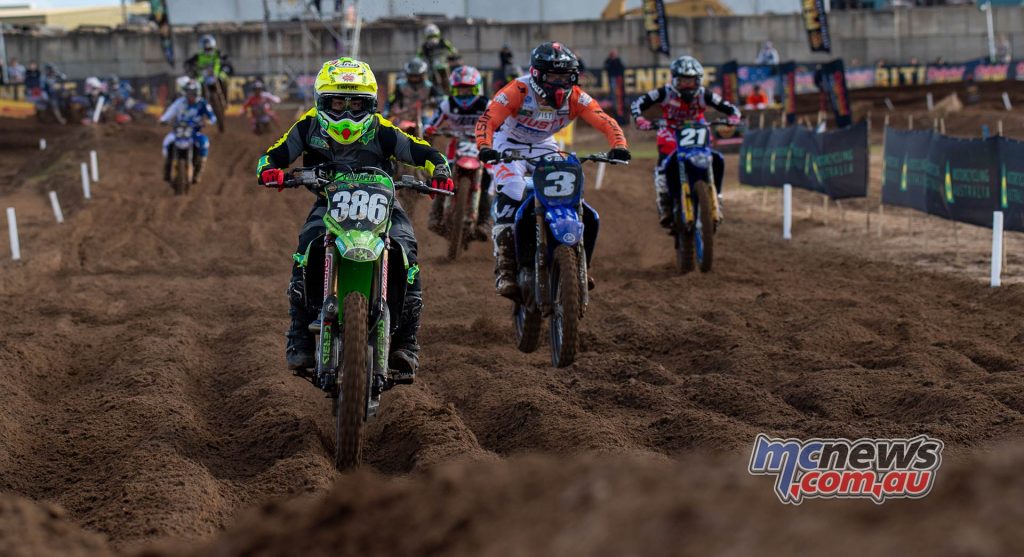 Budd took the early lead from the Japanese rider as Ferguson followed through, the pair all over each other with Haruki-san valiantly trying to keep in touch with the top two.

Malkiewicz only lasted a few laps before discretion played the better part of value and he sensibly pulled the Serco Yamaha into the pits to recover and focus on the next round at Maitland.

Todd picked off those in front to clamber his way to the front by the seventh lap, from there he did his customary magician’s trick and disappeared into the distance.

The 24-year-old from Cairns demonstrated yet again that he should be overseas strutting his stuff. Hopefully, something comes his way, and he heads off to chase his dream on the world stage somewhere, sometime soon.

Fired up, Todd rode away in a much more determined exhibition than the opening leg as Budd and Ferguson had a great brawl for second.

Todd went on to take an even more emphatic win with a gap of 21-seconds over Budd, who claimed second by just 0.170sec from Ferguson. Todd’s winning margin is all the more impressive considering he had come from so far back to take the lead by about a half-race distance.

For his rivals it must be a bittersweet pill to swallow as they literally ride their collective ass off to keep him in touch, but to no avail…

At the same time Todd is a perfect benchmark for the rest to judge their progress in the Lite class, no matter how demoralizing it must be to have him blast past as he makes it look as though he is on an easy Sunday ride, while the others were out of shape in the challenging conditions.

While the clinical exhibition of Todd may have been processional, there were some excellent pockets of competition through the ranks, no more so than the contest for positions four through to six with Kingsford, and Jesse Dobson (Serco Yamaha) getting back to form after his dislocated shoulder injury suffered at Wodonga. Yokoyama took sixth place.