Nothing like a bunch of hot French chicks doing the Can Can on a racing grid, while 110,000 wine-crazed Frenchmen set fire to things, and rev purpose-built engines until they explode. Welcome to Le Mans.

I’m sure I’m not the only race-fan who was disappointed when Carmelo Ezpeleta chose not to participate in the Can Can being held on the grid.

Dorna’s CEO has been known to join in the ethnicity of whatever country is hosting the MotoGP, and I’m still trying to scrub the sight of him in lederhosen from my mind. But not this time. I don’t blame him. Those high-kicks would have murdered his ancient hamstrings. 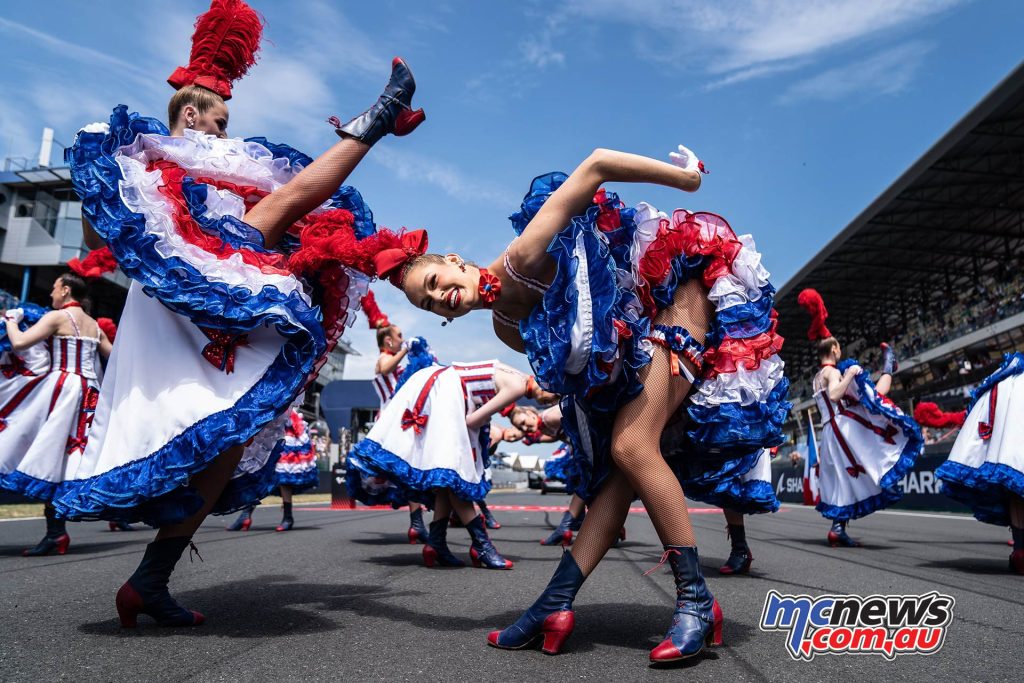 Around the grid, a crowd capacity bayed and howled, and sang the finest national anthem in the world, as the riders waited to commence hostilities. MotoGP had returned to France with a vengeance. And with a dawning Crazy Season maybe crazier than any that had come before.

Suzuki had pulled out for next year. Perhaps the 380-million Euro fine it was facing for emission-testing fraud had something to do with the decision. Either way, Hamamatsu’s departure had turned two riders into free agents looking for a gig next year. One was a recent world champion, and one was the faster rider, but with a history of crashing a little too often. Both would be superb additions to any team.

Apart from that, a vague cheating scandal around tire pressures had emerged in the days leading up to the race. It seems that Pecco Bagnaia and one or two others, had been running their tire pressures under the minimum required by the rules.

Dorna made some huffing noises, Ducati waved its arms around, and it was decided that next year, there would be a standard pressure-testing system put in place for every team.

This, we were told, would make it easier for everyone to comply because everyone was currently using different tire-pressure gauges, and maybe that was why things looked strange and rule-breaky. Move along – nothing really to see…except Mir and Rins looking for work.

Shoulder-cam made a return, with Aleix Espargaro being chosen as the camera-platform. This sent the Pommie comments into raptures about the technological brilliance involved in fixing a tiny camera to the upper-chest of one rider, thus affording us a hitherto-never-seen angle of the race. I shrugged. Like millions of other people. We’ve had riders’ POV shots for years now. This is the same thing from a slightly different angle.

Rain was promised for the race, but all the Free Practice sessions and Qualifying was dry. It rained a tiny bit during the Moto3 race, which was red-flagged and re-started. But by the time they kicked off again, the track was dry, and it stayed sunny for the main event.

Practice had seen the lap record tumble…and then go into freefall. The Beast was the first to break it, then crashed in ecstasy, no doubt. Almost immediately afterward, Fabulous set the first sub 1:31 lap, which Bagnaia bettered a few laps later. Then Zarco smashed through it again, setting a 1:30.537, and before you knew it, the top ten riders were all under the old lap record.

Zarco also managed to go hairing off the track at a phenomenal pace, carved straight through the gravel, then got a little bit of air, and rejoined the track in what must have been a terrifying five seconds. During the race, Rins replicated this amazing feat…well, the first bit that saw him scything upright through the gravel at 180km/h. He did not manage to rejoin the track on two wheels, and crashed out. It broke my heart a bit. He was doing very well and was very close to the front when it went pear-shaped for him.

The grid looked relatively normal in terms of what we’re used to seeing. Bagnaia on pole, Miller beside him, and the all-new and confident Aleix Espargaro, Aprilia’s current Golden Boy, in third.

Fabulous was in fourth, the Beast in fifth, and Mir in sixth, where Zarco should have been had he not copped a penalty for upsetting Pol Espagro during qualifying. Three grid spots cost the Frenchman dearly during the race.

Marquez? Well, he was back in tenth. He’d had a crash during practice, and then he had a moment during a practice start when a vicious tank-slapper had him reaching for his dodgy shoulder in pain. His Warm Up was curtailed so he could rest up a little.

The race itself, was superb. Le Mans is a hard braking, hard accelerating track, and there are a lot of overstimulated French people surrounding it and screaming for the entire race. It must be a sensational buzz to race on it.

Both Bags and Jack got a killer start, as did Rins, who rode around a whole bunch of chaos to wedge himself into third. Fabulous drifted back into eighth after being caught in a crowd with Nakagami and Marquez.

Binder Senior lost one of his aero wings when Zarco nudged him, and to no-one’s surprise, Maverick Vinales, who had started 14th on the grid despite showing some semblance pace in practice, was dead last by the end of the first lap.

Binder Junior let Maverick by a little later, so that he could continue his consistent rookie season by once again coming last.

Up the front it was Miller, Bags, Rins, a slight gap, then the Beast, Mir and Aliix. Then it wasn’t. Rins did his high-speed gravel exit, and it looked like Bagnaia was faster than Miller, and he was being followed by a very fast-looking Beast, who was now in third after Rins fell off, with Mir hard on his tail.

Fabulous was also moving forward and making faster lap-times than Jack’s. Remy took this opportunity to chuck some rocks around, which will no doubt depress him even more. Last year King of the Universe, this year “Oh my God these things are hard to ride!” I’m thinking he’ll come good later in the season.

Fabulous in sixth was now the only rider in the 1:31s, but Alex was proving impossible to get around, no matter how much the French crowd willed it. Aleix even ran wide, but Fabulous just could not capitalise on that mistake.

Remy’s team-mate, Raul Fernandez, the self-proclaimed Moral Champion of Moto2, self-proclaimed into the gravel as well, so it was not a good day for the KTM satellite team.

Some seven laps in and the field began to look like there were three riders contesting first place – Bags, Miller, and the Beast, and three other riders, Mir, Aleix, and Fabulous, contesting for second. There was a slight gap between the two groups, but was interesting was that it looked like Bagnaia and Miller were holding the Beast up.

But not for long. The Beast went past Jack for second, and set his eyes on Bagnaia. This naturally allowed Mir, Aleix, and Fabulous to catch them up a little, and bit by bit, Fabulous was raising the hopes of the French crowd. There were 13 laps left to race, so maybe…

Bagnaia and the Beast now began to gap Jack, while back in sixth, Zarco contended with Marc Marquez, and managed to come out on top. Not so much Jorge Martin, who plowed the French rocks in fine style.

With eight laps left, Bagnaia and the Beast had some two seconds on Jack, and a lap later the Beast made his move on Bags in the Dunlop Chicane. Bags fought back in La Chapelle, then ran wide in Garage, and finally crashed in Turn 14.

And the Beast was gone. Miller was 2.3-seconds adrift, and the Beast was still doing 1:31s, much to everyone’s horror. Oliveira’s horror was such that he crashed in Turn Four.

Try as he might, Fabulous just could not close with Aleix, and was denied a home podium. The Beast declared on Twitter he had “Pushed like a bastard. Again”, which mirrored his Tweet after he won the COTA round. Jack grabbed second, and Aleix remains the Aprilia’s Golden Boy with another podium.

Mighty Mugello is next in two weeks, but the Silly Season is in full swing, with rumours and hints of all sorts flying fast and hard.

Decisions will come soon, and they will not please everyone. I guess that’s the nature of decisions. Especially in this, the finest of all sports.