Bradley Ray claimed his third race win of the 2022 Bennetts British Superbike Championship season, delivering a masterful performance at Knockhill to take the checkered flag in the eBay Sprint Race ahead of Jason O’Halloran and home hero Rory Skinner.

Ray had set a lap record-breaking pace to claim pole position and the Rich Energy OMG Racing Yamaha rider was determined to return to winning ways after fighting back from a crash yesterday.

Ray got off to a flying start and despite the initial pressure from the chasing pack, he kept his cool to break his rivals and extend his lead at the top of the championship standings.

“That was a bit of a strange race for me to be fair; I set off at the start and I hadn’t planned on leading from start to finish! I just wanted to get my head down at the start and took it quite steady over the first few laps and I set a pace I was comfortable with and I didn’t feel near the limit. I got to about lap 12 and I had pulled about 0.5s and I thought it was the time to make a gap if I could. I managed to put in some strong laps and it meant I could pull a bit of a gap. I am super happy with the bike, especially after the lack of track time after missing the test and the crash yesterday. I would say this has been my best win of the season so far because of that; the other guys had laps under their belt from testing and I only had five laps yesterday so I only had today to get up to speed today. I am over the moon to bring the win home for Rich Energy OMG Racing Yamaha.”

The battle for the final podium positions were intense as O’Halloran dived into second on the opening lap ahead of Skinner and Danny Buchan, who split the Cheshire Moldings FS-3 Kawasaki teammates.

Kyle Ryde was also in the battle in the earlier stages of the race, but Skinner was instantly on the attack and moved ahead of the McAMS Yamaha rider on the second lap.

The Australian fought back and soon had regained the position as Ryde then moved into third place ahead of the Team Green team-mates as Skinner and Lee Jackson tried to regain the positions.

Skinner was determined and with six laps remaining, he had regained third place but O’Halloran had bridged a marginal gap in second place and he would hold it until the finish.

Skinner’s third place wasn’t safe; he was coming under intense pressure from his teammate as he continued to trade positions with Jackson over the final laps. However, it was the local contender, who returned to the podium for the first time since the season opener, claiming a hard-fought third place ahead of Jackson.

Danny Buchan had managed to get ahead of Ryde to snatch fifth place with Glenn Irwin holding off Tommy Bridewell for seventh.

“That’s our best finish here on the Honda in 7th place, and it’s been a good weekend so far. In Qualifying it went a little bit wrong, I had a small niggle at the start of the session and by the time I got around that we did have pace for the front row, but it just didn’t come together today, which falls on me, I wish I could blame someone else but I can’t! I went into the race with a positive frame of mind, I felt quite good but we were missing a little edge grip, which in turn can go onto drive grip as once we spin the spin can continue. It’s an area we know we need to improve on longterm, but I’m confident we can do that. Obviously we want to be on the podium every race, so that can be really tough. But, if we continue to make steps forward I believe we can get back up there.”

Storm Stacey had his best finish of the season so far in ninth place for Team LKQ Euro Car Parts Kawasaki as Josh Brookes completed the top ten.

“The race was a bit frustrating as I lost a few places in the early stages and that meant I was in a battle with my teammate which is always difficult as we are on the same machinery. I didn’t want to make any dodgy passes and take us both down, but the lap times were nowhere near what we needed to do to get on the podium. So, I’m a bit disappointed but I knew after qualifying we may always struggle but I’m optimism. We’ve looked at what we can change for tomorrow’s two races and hopefully we can improve.”

Defending champion Tarran Mackenzie was sidelined from the eBay Sprint race following a high-speed crash in the opening stage of the afternoon’s Qualifying session.

South Australia’s Billy McConnell was back on the top step of the podium as he stormed to his second win of the season after also taking pole position at Knockhill. 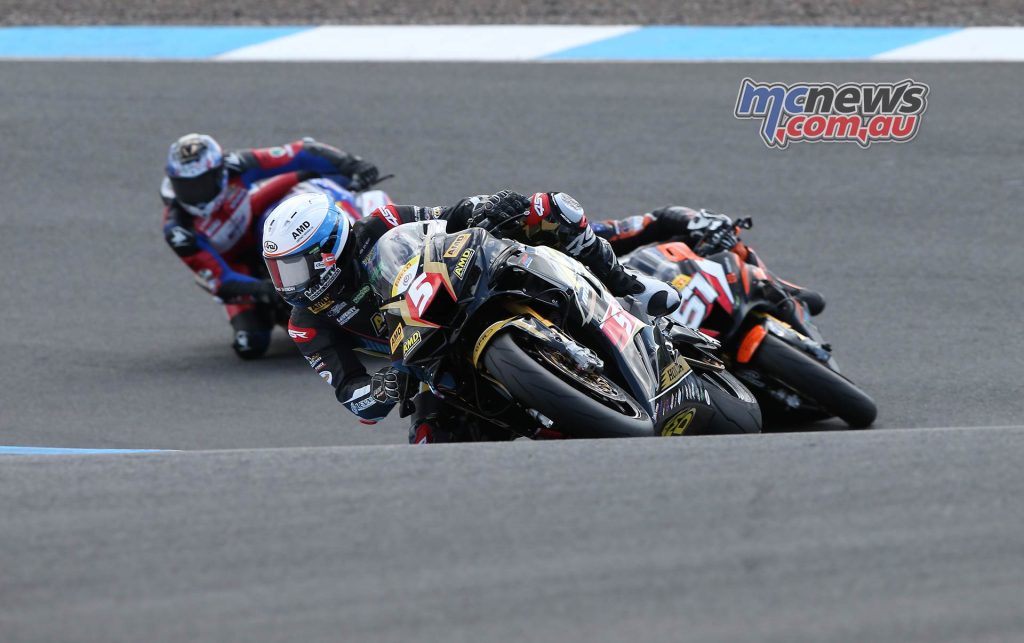 The Aussie took the lead from Richard Kerr on lap 14 of the 24-lap battle and was able to hold it to the end as he led countryman Brayden Elliott over the line with more than half a second in hand.

Aprilia-mounted Tom Ward was third, as early leader Kerr had to settle for fourth ahead of FHO Racing with Kobelco’s Alex Olsen who finished fifth.

Jack Kennedy stretched his lead in the championship as he stormed to yet another win in Knockhill’s Sprint race.

The Mar-Train Racing rider rode what looked to be an effortless 18-lap race, cruising to the win 4.193secs ahead of Gearlink Kawasaki’s Luke Stapleford.

Third was Harry Truelove, who led his Appleyard Macadam team-mate Bradley Perie over the line by more than a second as Jamie Perrin took fifth.

In the GP2 class, once again Korie McGreevy was in a class of his own, sixth finishing overall and several seconds ahead of the nearest GP2 machine of Cameron Rees, which finished 12th overall just one place ahead of third-placed former BSB rider Barry Burrell on the Kramer.

Franco Bourne took a commanding win of more than four seconds over Max Cook to celebrate his second victory of the season.

Cook, who dropped down to fourth after hitting a false neutral during the race, fought his way back up to second as Louis Valleley was third.

Race 1 at Knockhill boiled down to a duel between the returning Evan Belford (City Lifting by RS Racing) and Sullivan Mounsey (Wilson Racing/J&S Accessories) on Saturday – with the number 52 just able to stay ahead over the last lap and secure his first win of the season. Local rider Troy Jeffrey (ThorneyCroft56 Racing) impressed to complete the podium on home soil in Scotland, pulling clear of Bailey Stuart-Campbell (Team 151s/Lextek) by just under a second by the flag.

The key drama was two fold, however, as Johnny Garness (MLav VisionTrack Academy) initially pulled clear with more than three seconds in hand before sliding out, seemingly giving teammate and closest rival for the crown, Carter Brown, a chance to close in. But a handful of laps later that chance disappeared as the number 74 then suffered a technical problem, taking him out of the fight for the win.

Up ahead, Belford vs Mounsey pounded on in the lead, and the two were closely matched until the former was able to make a small gap on the final lap and stay ahead over the line, returning from injury in some style. Mounsey impressed with another showcase at the front, however, and this time is rewarded with a podium.

Behind, Jeffrey converted a good qualifying, great start and top pace into third place and a first podium, edging clear of Stuart-Campbell in the latter stages.

All in all, disaster for Garness and bad luck for Brown combine to see the two split by exactly the same margin heading into Sunday… but now Veijer has taken over in second.